Who or what is SpongeBob?

The figure SpongeBob Squarepants exist since 1999 and came from an animation series for children. SpongeBob SquarePants is a sponge that lives underwater in the sea, in a town called Bikini Bottom, he lives in a pineapple with its snail Gary. SpongeBobs best friends are Patrick the Starfish and Sandy the Texan Squirrel in a diving suit. And of course, in SpongeBob's fantasy, Squidward the squid, who is not only SpongeBob's neighbor, but also his colleague in the fast-food restaurant Krusty Krab. SpongeBob, Squidward and their boss Mr. Krabs have to protect the secret formula that contains the recipe of the Krabby burgers, which is constantly in danger, because the competition wants to have the glory for itself, including Plankton, chief of the  Chum Bucket, that sneaky plans does everything possible to get his hands on the formula. 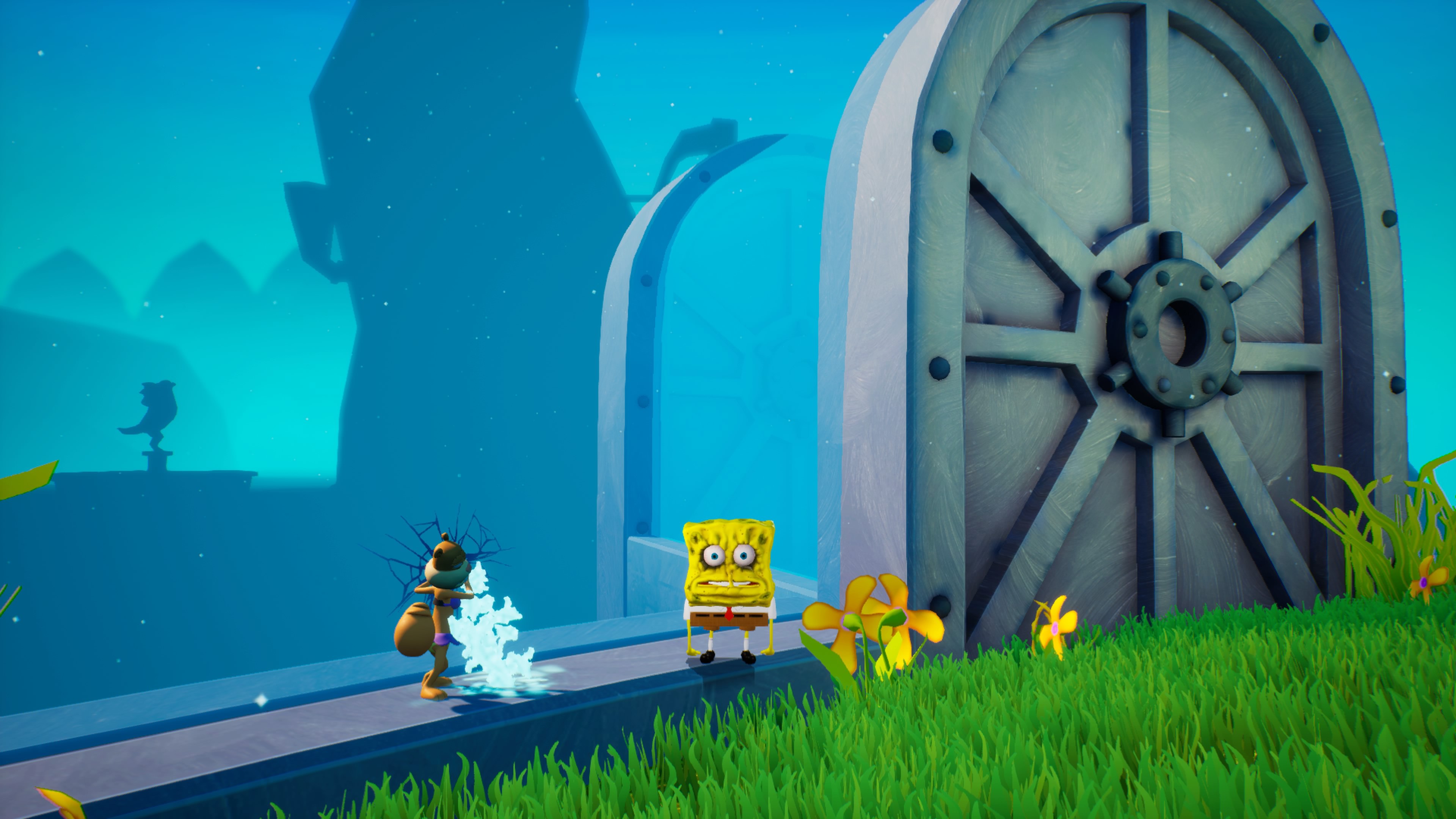 SpongeBob SquarePants: Battle for Bikini Bottom - Rehydrated is a 3D platformer, where the player has to run, jump, do opponent and smaller tasks in beautiful and funny 3D worlds according to the squarepants theme. There are also lots of collectibles that the player can collect, he will be rewarded with a golden spatula (SpongeBob need to collect them), for example when the player brings Patrick 10 socks back or exchanges glitter things with Mr. Krabs, which we get from opponents and other things collect after we destroy them.

The story in the game

As usual, Plankton wants to steal the formula and uses a hellish plan to ensure that there is chaos in Bikini Bottom. At the same time on the same evening, SpongeBob and Patrick finally want some real action, so they wish an army of robots to protect Bikini Bottom. As if Plankton had read the thoughts of the two, he is putting this plan into effect and has Bikini Bottom return home from evil robots that not only cause chaos but also annoy the poor residents.

Partially open worlds with many details

Anyone who knows the TV series knows how colorful Bikini Bottom can be, like in the original game 17 years ago, the worlds are much more colorful and glaring than ever. The lovingly designed 3D worlds abound with details, hidden paths and collectibles that the player can explore in a partially open world. For example, the world is separated with a red dashed line, when the player moves beyond it, the hand of Patchy the Pirate appears, who sings the theme music in the series and occasionally appears, pulls the player back to the checkpoint or one nearby place

Game characters and their skills

SpongeBob is lucky to have good friends like Patrick and Sandy, because without them he couldn't do his adventure. In the great 3D world there are passages that can only be done with Patrick or Sandy's help, so Sandy uses her Texan lasso as an ability to reach other places or to shimmy from gold bells to gold bells while Patrick uses his muscles to pick up and throw watermelons and other objects, he can also stack watermelons to reach higher places, which even SpongeBob can´t reach with his double jump oro hop from wall to wall.

In the game you will meet many characters from the funny cartoon series who need your help or just want to challenge yourself, such as Larry the muscular lobster, who asks you to beat his time in a slide ride or Mrs. Puff, who asks you to rescue the poor children who were looking for some fun out of boredom and put themselves in danger, but buddy bubble your loyal friend always has some tips and new skills ready. 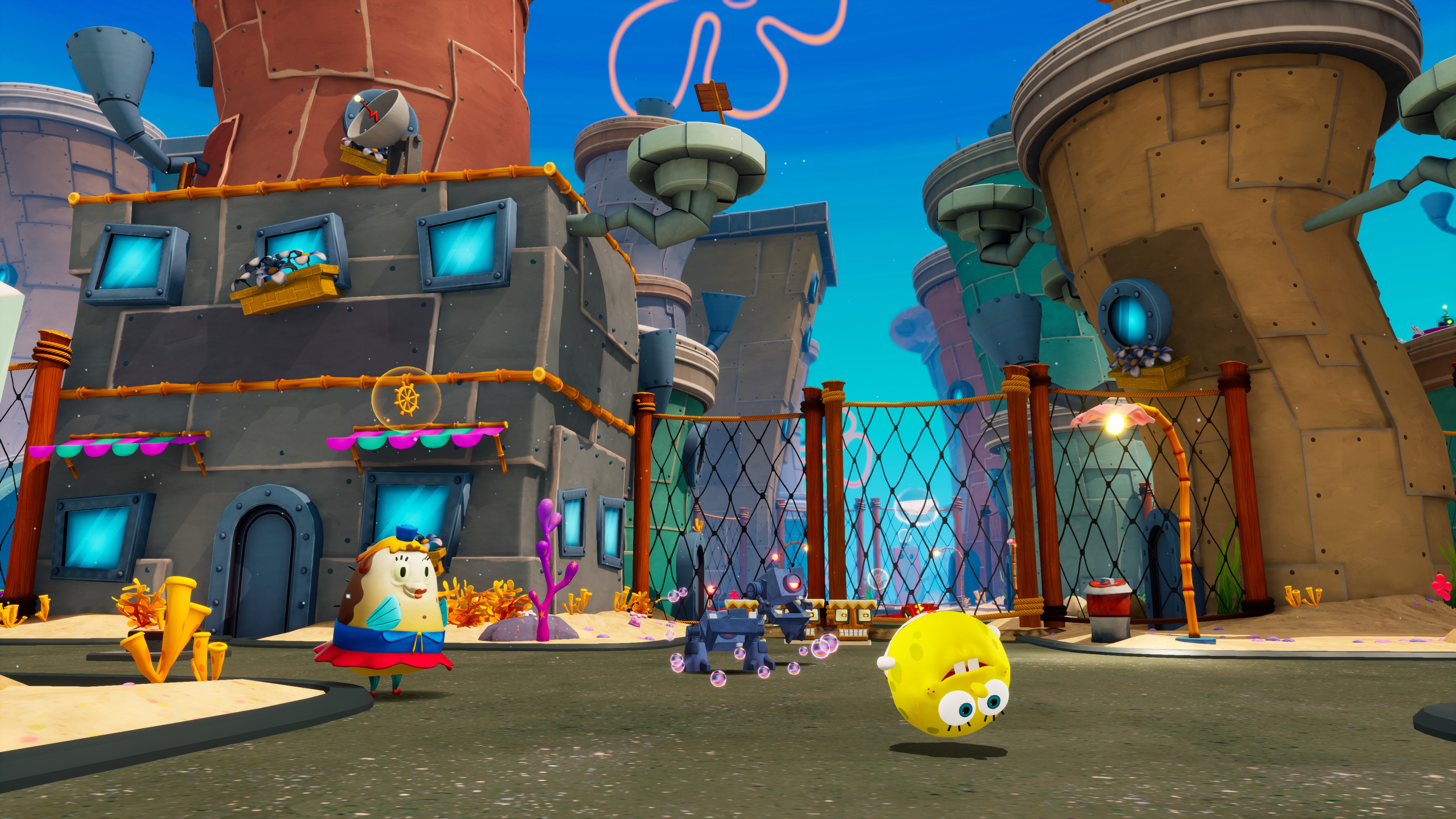 Since the game was completely re-created in the Unreal 4 Engine, snippets that did not exist in the original have now made it into the game, so players can now fight Robo-Squidward and explore the dream world of Patrick. The multiplayer mode can be played with zwo peoples, where the players have to defeat hordes of different robots until they finally have to fight Robo-Squidward in a boss fight.

When I saw the first time on TV a short Trailer for SpongeBob I was thinking "what a crap, peoples today goit no new ideas", but then on a raining day, I had nothing to do and I was bored, so I watched TV and of course, the only thing to watch was SpongeBob, because all other Shows was nothing for me. And you know what? I loved it so much that I started to watch it more and more because it was funny and stupide to the same time. One day my grandma gifted me SpongeBob for PS2 and it was one of the best Jump´n´Run Games i ever played. When i saw on E23 2019 THQ is doing a new SpongeBob Remake wI was so happy and hyped, I watched the E3 Trailer so many times waiting to get finaly a release Date to buy and play it later. Finaly in April a Date was set and I was so hyped, that I was also scary that the game could flop. But I honestly loved evers single Minute in the Remake, it was like playing the old one just a bit better because of all the details and nice colors. Also we sadly have less game this days that can beet or at least reach a similar level like the old onces.

So if you are a SpongeBob Fan or Jump´n´Run Fan, buy it you will love it, playing the Remake is like beeing in the Serie, you meet all the lovly Characters and even those who are not known so good, the wolrd is beautyful and it makes a lot of fun to collect all the items you need. Thanks to the tutorials even smaller kids can play the game and have fun.

I LOVE THIS GAME