We Happy Few is a somewhat odd blend of stealth, crafting and survival mechanics, set in a hostile town in Britain. You'll sneak, craft and run your way across an island of mostly hostile Joy-heads who are all too eager to snitch you out (and subsequently kill you) if you don't blend in. Your objective is to stay alive long enough to detox from Joy (a drug everyone takes to make them forgetful) and get off the island.

In the fictional dystopian past of 1964, the citizens of Wellington Wells have concocted a miracle drug called "Joy" to help them forget how terrible and guilty they feel about a horrific bargain they made with the German forces who were occupying Britain after WW:II. The game follows the story of Arthur, a man suffering from haunting memories of his brother, as he attempts to leave this land of never-ending "happiness".

WHF has a stellar premise and a very interesting setting, but as the game stands right now, it's not a game I would pay full AAA retail price for, mainly due to problems found in the gameplay. While I get a very heavy Bioshock and crafting/survival vibe from this game, there is a lot of polish that needs to happen before it can meet the high level of expectation that the game has established.

On the surface, We Happy Few combines stealth, gathering and crafting, randomly generated world layouts, skill trees, and more into one game. To say this has already been done in one form or another is redundant; there have been tons of games that blend these elements, or laser-focus on just one or two. Unfortunately, it's because this formula has been done so often (and so well) before, that a lot of WHF's shortcomings are placed in stark relief. In addition to gameplay problems, there are also bugs and design options that just shouldn't really be in a game like this at release, especially given the blueprint that other games have already successfully followed to set a precedent in the genre.

Stealth is the most important thing in the game for the first hour or so, since your character is quite weak and fighting isn't really an option. There's a thrill to these early segments as you're being chased through the streets, knowing that if you are caught, you are most likely screwed. However, that thrill fades quickly once you get a strong enough weapon, and we generally ignored stealth from then on, since we could pretty much either kill everything in sight, or just run outside of the map/town until the bloodthirsty populace forgets you exist, and everything calms down. This takes the tension out of the game fairly early, and the ensuing mechanics don't really find ways to make up for its loss.

Gathering and crafting plays a decent role in the game, but it never feels fully realized; it actually tends to be pretty tedious and repetitive, since one of the only really useful things you craft besides a weapon is a Healing Balm which literally grows like weeds around the game world, so the need to craft it isn't very dire. Outside of story items, 90% of the crap you pick up will be sold, and that's IF you find a vendor, which are often in short supply. In the end, the survival mechanics and crafting feel a bit bland most of the time, and a lot of it can get downright tedious, detracting from the experience instead of enhancing it. It doesn't help that the "randomly generated worlds" keeps the basic format of locations, but changes where things are in said locations. Many of the houses are locked or otherwise can't be entered, making the city feel fake, and you can do a ton of backtracking as you look for the "randomly generated" item you desperately need to move forward.

Then there's the skill tree and combat itself. The skill trees level up at random points in the story, so there is no sense in trying to grind or upgrade your levels sooner. We found a lot of the skills didn't add a ton to the experience, and worse than that, the combat is often glitchy and annoying, with enemies literally teleporting in the middle of a fight, or clipping out of bounds and alerting guards from another section entirely. Half the time your swings go wide and your shoves whiff in midair as the enemy you swore was right there somehow dodges your attack.

All of this is not even taking into account how utterly dull and depressing Arthur is. He's a whiner, and every other word out of this guy's mouth is in a whimpering shakey "Oh dear, oh dear" voice that can be quite grating to listen to. While I understand that it's a major theme of the game that you can't be happy all the time, Arthur gives me no reason to care about his success or problems.

We Happy Few is a game of amazing visuals. Between the Joy tinted lenses of perception and the grim-dark harshness of reality, the game does an amazing job of making the world feel concise. However, while on the surface the game is visually appealing, after a few hours of play you begin to see repetition in assets and locations, making the world feel "skin-deep". The music in the game sounds excellent, however, and the voice acting and writing is superb. While not a comedy by any means (this is a game about depressed characters in a world of drugged out happy folks) the dialogue is somewhat campy in an enjoyable way.

We Happy Few suffers from what I can only call shine over substance. The building blocks are in place to make a great game, but I wouldn't recommend it in it's current state for anything more than half its going price. If all the issues in this game were fixed, I can see it being a fun indie title that could potentially tell an interesting story. But as it is, despite loving the aesthetic and world, I'd wait for a sale.

Hello, please give me your key because I do not have any money to play and I really want to play it 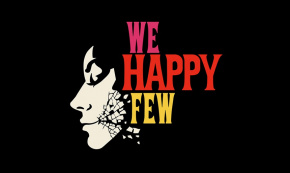