This is an Early Access review on an unfinished title.

Enter the mind of the world's most prolific horror icon in this newest action-adventure dungeon crawler. It's up to you to open the pages of an eldritch nightmare and journey beyond the realms of sanity, and also shoot some penguins. Lovecraft's Untold Stories is a dungeon crawler action-RPG with roguelike elements. You choose a character and venture into the randomly generated mansion, fighting the horrors that lurk within. Different character have different loadouts, and your starting items can be changed as well depending on what you pick up before entering the mansion. Although the game is as edgy as an emo hair band, it walks the line well and never comes across as campy. Each level takes a nostalgic page from the works of HP Lovecraft, and many of the monsters, clues, and settings are indicative of that. If you are into Lovecraft, you'll be into this.

Lovecraft's Untold Stories follows the trail of those brave enough to enter the old mansion and unlock the secrets within. Cultists, murderers, monsters and creeping horrors await you in the blood stained halls and otherworldly caves within. What drives you to keep searching for clues? What makes you stare into the darkness in search of answers? Only time, and lots and lots of blood will tell.

The level design of the mansion is a random collection of rooms, some with interesting bits of lore, some with chests and desks filled with loot, and some with cultists and eldritch horrors. Surviving requires constant movement, a conservation of ammunition and knowing when to pull the trigger and when to toss an old fashioned molotov cocktail. At the end of each stage you will find a boss, and if you're lucky enough to defeat it you can enter the sanctuary, a place between levels where you can store items and more. Once you've swapped, sold and saved, you're ready to move on to the next chapter of abject madness. The enemies are varied and the levels are interesting, but the game is not without problems.

The biggest gripe I've got is unfortunately with the combat; it's somewhat clunky in that you have a shooting mechanic similar to what you would find in a bullet hell, but unless you are right up in a monster's face (somewhere no one wants to be), more often than not you are going to miss. Also the stamina meter drains at an insane rate, replenishing itself in staggered chunks rather than a consistent flow. Another problem I had (and i'll admit, this may be a bit nitpicky), is that the game's save points feel much too far apart.  You can explore for a long time and gather a lot of stuff before you have to take on the boss, and if you mess up, its over. This would be ok, but this roguelite isn't bite sized, which is one of the charms of rogue titles in general, and for a good reason; things can quickly get frustrating when you keep dying over and over and can't find a place to save.

Also, clearing the maps completely is almost a requirement, as sometimes you have to have a key to exit the map and face the boss, which you can easily miss if you don't turn over every single writing desk, corner and cranny looking for clues. Item shops are few and far between as well, so all the money you acquire is more or less pointless unless you're lucky. The first level is the best hands down, but each successive level has less polish and detail.

The game sports a pixelated old-school look and a gothic atmosphere, and they get a lot of mileage out of the simple style. Character animations are fluid and well timed, and the various monsters look interesting. The music and sound design is very thematic and does evoke a creeping, Lovecraftian vibe.

If you want something thematic and atmospheric, this game has it in droves. However, you might get diminishing returns if you aren't a big fan of Lovecraft, especially since you'll miss a lot if you don't get the easter eggs that are around every corner. It's unfinished, so I can't give it a wholehearted recommendation in its current state, but if you want a creepy challenge, give this game a shot. I'll be looking forward to seeing what the finished, fleshed out final product looks like. 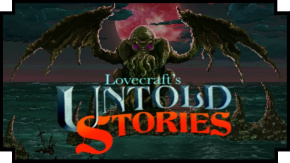