Hellblade Senua’s Sacrifice comes from veteran developer Ninja Theory, having created popular titles such as Heavenly Sword, Disney Infinity, and DmC: Devil May Cry. Released on August 8th, 2017, the game itself is an action and puzzle filled adventure set in a grim fantasy setting, with a focus on Norse mythology. Most notably, the development team have stated on numerous occasions that they hope to present their audience with a gaming experience that emulates the inner workings of an individual suffering from mental illness, specifically psychosis, where the thoughts and emotions of an individual are so overwhelming, they feel disconnected from reality. The game easily makes the player feel hopeless in their journey, only providing small breadcrumbs of hope to keep you moving forward through the story.

The game revolves around a young Viking warrior named Senua, who wishes to travel to the underworld in order to bargain for her lover’s lost soul. Senua’s journey to Helheim pits her against various mythical creatures and beings, on top of her rapidly decaying physical and mental health. Small tomes offer pieces of lore to the world as well as the ramblings of Druth, a fellow Viking that had freed his soul by escaping the wrath of the gods. The story of Hellblade includes various unknown narrators, presumably lost souls, as they literally commentate on Senua’s actions throughout the game. While adding an eerie atmosphere when exploring or facing enemies, the story and purpose of Senua remains clear throughout the course of the adventure, immersing the player in the world of Norse mythos.

Players familiar with Ninja Theory games will find themselves right at home with the controls of Hellblade Senua’s Sacrifice. While initial movement and exploration seems fairly standard, Senua is soon met with demonic entities defined as the souls or shadows of Northmen. Senua is capable of a fast melee attack in addition to a heavy strike, as well as blocking and dodging. Successfully timing blocks opens enemies up for a barrage of melee attacks which break enemy defenses. Eventually as Senua faces more enemies at a time without any lock-on features, dodging becomes an incredibly useful tool and mastering the mechanic will increase Senua’s survivability drastically later on in the game.

Utilizing the powerful Unreal Engine 4, Hellblade is a beautiful game to play through. Environments are diverse and natural. Forests are filled with vivid greenery, while abandoned villages are extremely detailed, down to smoldering campfires and derelict pottery. As Senua faces various deities from Norse mythology, Hellblade fleshes out supernatural characters through a horror-centric lense. One example would be Surt, a fire giant that is meant to lead the rebellion against the Aesir and Vanir gods during Ragnarok, is depicted as a towering figure of burning flesh and gore. His realm best resembles the traditional interpretation of Hell, a fiery landscape filled with screams and corpses of ash. With this being only one of the characters Senua will have to face, Hellblade definitely establishes its grim atmosphere. The sound work for Hellblade is equally phenomenal, as previously mentioned there are various voices that narrate Senua throughout the game, said voices are presented as ghostly whispers that can only be heard by the player and supposedly Senua herself. Having a surround sound setup or wearing headphones greatly boosts the ambiance as the voices are sometimes too intimate, whispering right alongside you.

Hellblade Senua’s Sacrifice is an incredibly immersive and dark adventure game that explores a somewhat modern interpretation of Norse mythology. The game does well to make the player feel uneasy, as they traverse a foreign and hostile land in hopes of finding the soul of their lover. Facing supernatural entities and creatures as well as the steady decay of Senua’s own mind offers a experience rarely seen anywhere else. Both the graphics and sound design for Hellblade are top notch, allowing the player to easily immerse themselves into Senua’s dark world. 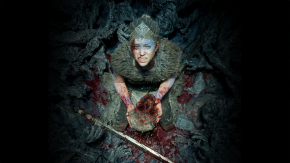