Developed and Published by Agent Mega, Paper Dungeons Crawler is a simple dungeon crawler that features many staples of the Roguelike genre, like a turn-based move system, scarce items that require identification to determine their function, and unforgiving combat with permanent death. Health, mana, and hunger management is important; it's likely you will find yourself in a situation where you're out of food and can't recover health, nor able to cast an important spell at a crucial moment due to being out of mana. You need mana. Trust me.

In the Kingdom of Cyndaria, four sacred trees once were the source of its prosperity. Without them, everything has gone very, very bad. Your goal as the intrepid adventurer is to discover four seeds across four dungeons in the hopes of bringing back the peaceful times the people once enjoyed. It's entirely within reason to expect insurmountable odds and a horrible death.

What little narrative that's there is almost completely bare bones. Some is told in screens or via dialogue, but the bulk of the game's lore is found in monster descriptions at the Bestiary, and it's expanded by monsters occasionally dropping biographical pamphlets. Dungeons are generated procedurally with pre-made elements, and as a result, you'll often come across the same room, but with the entrances and exits switched around. Generally, you will encounter the same dungeon layouts from each play through, as well as enemy and item placement.

When you begin the game, you'll need to choose from a small variety of starting classes. Each have certain affinities for their stats; a Warrior will be able to allocate more points into strength than wisdom, while a Mage can do the opposite. Being a boy or a girl also gives you a small boost to strength or dexterity. Additionally, you can select from various starting spells, specialization in certain equipment, and a small gift. Through gaining experience, you'll earn skill points that can lower item requirements or increase other stat bonuses. Finally, factors such as perma-death, hunger and enemy strength can be modified to modify the challenge to your liking with bonuses or penalties to your high score.

Both the characters and the environments are rendered with pixel graphics. Characters have incredibly limited animations, usually a single frame for any particular action, but it is effective enough and bolstered by somewhat cute character design. Often, you will not be able to decipher what is or isn't walkable ground or an openable object without bumping into it first.

The soundtrack consists of simple synthesized tunes. It's very limited and won't show up very often. There are lots of short sound clips for each action and atmospheric effects. They are efficient, though they lack much impact and won't be remembered for long, or at least not fondly.

Paper Dungeons Crawler has a few unique ideas and twists to surprise fans of the genre, though others wouldn't be able to distinguish the game from similar titles. For major fans of the genre, this will be worth running through because the game is fun, it's just rather rote compared to other games in the same vein. 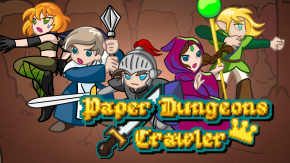