Note: The version we are reviewing is an Alpha version, with the full release review coming soon. As such, many elements were not available or otherwise incomplete.

Graveyard Keeper sees you become the local graveyard keeper after having been mysteriously transported from the present day to a chore-heavy medieval society. Your mission: manage the various corpse-related properties under your jurisdiction in order to complete quests and other busywork that will probably lead to creating a magic portal back home.

The multitude of tasks involve resource gathering, like woodcutting, mining, farming, and autopsies. Raw resources get processed into useable materials at specialized workstations, which are constructed with materials from traders or other workstations, while more bodies are delivered that need to be autopsied and buried. Then you've got the graves themselves, which need decorations to maximize the overall quality of your graveyard, and crops and meat from bodies need to be turned into food to get more energy to do more work before having to go sleep. Then there's the work you'll need to do that will get you burial certificates and other valuables that can be sold to the nearby village for money, which you'll spend on rare materials to repair your tools, etc. There is a LOT to do in this game, and it's important to plan things out.

In addition to the grueling manual labor, there are numerous denizens of the land that need you to craft or fetch specific items, or offer important services. These encounters essentially make up the story, which only moves forward as you get people what they want. Completing quests often gives you valuable resources, perks, and blueprints, which leads back into the... cycle outlined above. The main quest, finding a way home, will more or less introduce you to the majority of characters and locations. Certain characters are only active on a particular day of the week and only for a small portion of that day, which can set you back an entire week if you were late or forgot a crucial item.

There is no time limit or apparent threat. The journey is yours to define. The only struggle is that of the working stiff; having to scrounge for materials and cash, trying to plan out an efficient work-flow, finding a way to finagle 5 bars of iron ore from the mountains to your house in one trip. It is difficult to not get lost in the minutia of tasks and goals both short and long term, while it is very easy to become frustrated with the lack of convenience or direction.

The game's art direction is superb. Characters, objects, and the environment are rendered with sprites, which are all very clean, well animated, and dynamic. Trees and plants have a nice looseness that is disturbed as you brush past or harvest them. Water shimmers and flows, and weather effects, while not having any apparent effect on the game, look great.

Unfortunately, the user interface is far too simple and often unhelpful. Time is represented by a rotating sun/moon dial surrounded by the days of the week, and your energy is shown as a blue bar. These metrics are not very accurate and lead to lots of guessing. You also cannot view blueprints or recipes in your notebook, leading to a lot of running around to specific construction desks to see what materials are needed. There is a log of known characters with any corresponding tasks associated with them, but it is criminally vague and has no other information (like what they sell and buy, or their location). Most elements of the UI and workstations are a mystery, with no instruction on how to use or find things.

The music tracks are put together well enough with soft melodies, though each area typically has one track that gets played repeatedly until the day ends or you leave the area. They now live inside my brain where I am cursed to hear them over and over until I am dead. The majority of sound effects are related to your actions, like walking, chopping, digging, or opening stuff; these are generally satisfying to listen to and fit their corresponding action well. Characters speak with garbled gibberish, which fits the style well.

Graveyard Keeper provides a well made, very deep, very taxing experience that sucks you in for countless hours whether you're enjoying it or not. I generally experienced enormous discomfort and seething frustration while performing the many banal tasks and trying to make sense of everything. I had a tough time with Graveyard Keeper, but there is definitely some great stuff here. We are reviewing the final version now, so stay tuned. 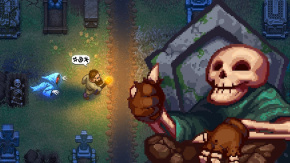