Dig or Die is a Sci-Fi platformer, sandbox and tower defense action/strategy game developed by Gaddy Games. Ever since Minecraft first graced our screens oh so many years ago, there have been a host of games with the mine, build, and survive type game play, and many have added their own twist to it. So what does Dig or Die add to the formula to make it stand out, and more importantly, does it do enough to separate it from the others?

The entire story of Dig or Die can be summed up in one sentence: you crashed on a planet and now you need to gather resources to build a rocket and get back home. Story really isn't the driving force in this game, but in all fairness, not many games in the genre have deep, rich stories anyways. Like the bulk of titles in the genre, your job is to mine, build, and survive the night, making incremental advances until you can eventually leave the planet. The story, if you will, is yours to build.

That said, the mechanics of the game are where the real focus lies. The game plays a lot like its predecessors, so games like Terraria and Starbound are good comparisons for this title; if you enjoyed those, you'll likely enjoy this. What the game does a little differently, however, is its survival aspect: it's a build and survive game crossbred with tower defense.

During the day, you explore, mine resources, and build up your base, but at night, creatures will swarm your location in a mad rush to kill you, and I'm not exaggerating when I say mad rush. Unlike, say, Minecraft where you just dig into a mountain and seal yourself in for the night, you have to prepare proper defenses in Dig or Die. The creatures know exactly where you are and if you don't give them a proper entrance to your base, they will bite, claw, and shoot through your walls to get to you. You have to think smart and give your foes a path to follow.

Along the way you'll craft new weapon upgrades, learn to build dams to power your bases, and create teleporters to send you back and forth across the world. This is another place where Dig or Die sets itself apart from the rest; physics play a huge role in the game. See that floating island? Want to build a tower up to it? Well, it better be structurally sound or it's going to crumble beneath you. This emphasis on proper building will force you to quickly learn how to build towers and bridges that won't buckle under pressure. It forces you to get creative, as simply stacking a bunch of wooden crates is an easy and quick way to die.

At certain places around the world you'll find bosses, usually large versions of creatures you've already fought. These beasts are insane and usually spawn streams of lesser foes to ruin your day. But with careful planning and the right equipment, you can outlast them and score yourself important materials to further your goals.

The game play is simple and repetitive, and it's easy to get addicted. The game gives you just enough rewards to keep you mining for "just one more" day/night cycle. Unfortunately, without a strong story, the game does devolve quickly into a daily grind. Go out, look for material, hurry back before nightfall, hold out until morning... rinse, repeat. With the exception of your ship's computer (who's not exactly skilled in charming conversation) there's no one friendly to interact with.

The graphics are on par with something like Terraria or Starbound, meaning they're functional, but nothing to write home about. It's your typical 2D indie affair with retro-style graphics.

The music, while nothing amazing, is appropriate and works well. It changes depending on the scenario you find yourself in and does a good job of setting the mood. When night falls, the music becomes more desperate, driving home the sense of urgency. When you slip too close to a boss, you'll hear a strong piano theme nailing home the epic nature of your battle. Of course, neither of these situations should happen often, since a good base means you won't have to fire a shot during the night and the right weapon and some platforms means some bosses can't touch you, but the music does a good job of convincing you the situation is dire.

Sure, your enemies are insanely focused on your eradication, and the daily grind of explore, mine, defend, can get tiresome. And yet, there's something about this game that keeps me wanting to play just one more day. Just until I finish this dam. Just until I get to that stupid floating island. Does addicting mean the game is good? Well, that's debatable, but while you're debating, I think I'll just play one more day of DoD. 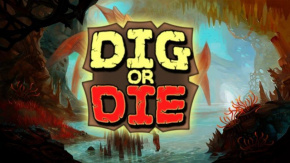