From the minds of Terrible Posture Games and in association with Grip Digital, join the resistance and fight the Alien Menace in Mothergunship! Mothergunship is a sci-fi romp into glorious tech heavy mayhem. You are the "Hero" of the resistance, and by that, I mean you are a random nobody who The Colonel has decided to shove into an armor suit in order to fight an alien menace. You'll jump, punch, and blast your way through the armada and make your way to the Mothergunship while creating crazier and crazier weapons to get the job done.

Mothergunship is a FPS Rogue-lite, but first and foremost, it's a gun building simulator, and it is nuts; there are many, many different type of gun parts you can get, as in, more than you can shake a proverbial stick at. Connectors, boosters, barrels, amplifiers, status effects, you name it, you can get it, and you can do a lot with these parts. The level design is modular, which means that there are a lot of repeating moments in the game's levels that consist of a range of corridors, platforms, arenas and more. Level spread can be randomly generated for some missions, while other missions have set layouts but randomly spawning enemies.

You can do a lot in terms of upgrades, and parts can be earned via level success or buying them in the missions and surviving to the end. You can also level up your suit in between levels to make you faster, double/triple jump, or have better health. Mission structure involves side missions with random builds, or story missions with a dedicated framework.

Unfortunately, Mothergunship can be a bullet hell in the most frustrating of ways. In a three-dimensional space, it's hard to always keep an eye on where danger is coming from. Health pickups are rare and miniscule in their support, which can quickly lead to you dying and losing the level, which comes with major penalties. When you die (or quit the level, which I found out the hard way) you will lose any and all gun parts you brought with you or picked up during the mission. So if you build a good gun and die, those parts are gone until you can find them again and survive the mission. And some levels can just be flat-out unfair. No health drops, low money drops in between shop areas, or shop areas with no health available for purchase can quickly lead to losing your library of gun parts and having to start over.

One final nitpick is that the clipping detection of this game is super harsh. Many times I would be frantically trying to back up and dodge a missile to the face, when I would hit a wall because my character hit a 3 inch curb that had to be jumped over. In short, you'll get hung up on corners a lot in this game.

The music brings the kind of high octane beats you would expect in a game about building guns and blowing up aliens in space. It's not bad to listen to, but not so essential to the experience that you couldn't put on something else while you play. The voice acting on the other hand kept making me smile throughout the title. Something in the voice acting and the way the characters talk really feels natural. The talent in this game is fantastic, and hats off to them for doing such a great job.

Mothergunship is a fun game that scratches that gun building itch I never knew I had. However, it's held back by a lack of balance and harshness of loss in its game. To not only lose the level but also what could have been hours of progress can be detrimental to the game as a whole. Still, the experience is fast, frenetic and fun, and if you like tinkering, there is enough to keep you busy here for a long, long time. 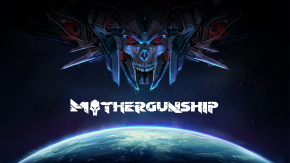