Developed by SpaceCan Games and published by X.D. Network, Juicy Realm follows a group of explorers who fight against sentient plants, keeping the hellish vegetation from overthrowing humanity. Arm yourself and face off against a cornucopia of combat consumables!

Juicy Realm is a twin stick bullet hell that is lacking in the bullet hell. The combat is actually very subdued in comparison to most games of its kind, with the action in Juicy Realm moving at a fraction of the speed that I'm used to. However, this is offset by a LOT of enemies, and a lot of things going on on-screen. Everyone may not be thrilled at this slower pace, but I personally found the speed to be refreshing, and I enjoyed being able to react to things gradually instead of having to make a split second decision that costs me the game.

There is melee and ranged combat in spades here, with a variety of guns and implements to inflict pain and death upon your enemies.The weapons are mostly played for humor (now that's a strange sentence) with funny designs and puns that often dragged a chuckle out me; sure, you've got your AK-47s and Wrenches, but there is also a Steam gun that shoots dollar bills, a CupHead Finger gun, a Rubber chicken (sound effects included), a baguette, and loads more.

You have two weapon slots and an ability that is unique to each playable character, with four characters available: The Ninja, The Boxer, The Botanist, and the Mercenary. Each have character specific starting loadouts: the Ninja has a massive sword, the Mercenary has a much faster and more powerful gun than the rest, and so on. The skills of each are unique as well, with the Boxer being the most useful in terms of durability, with an AOE heal on recharge. Beating a stage causes a chest to appear that contains a random item or weapon, and every three stages there is a boss, promptly followed by a rest area where you can find weapons, ammo, or passive upgrades to purchase. Freeing certain characters in stages will allow them to show up at these rest stops, and give you more options when you arrive.

My only real gripe is that the options menu is only available on the start screen, so if you need to change anything in the middle of a game, you're out of luck and have to start over. The melee combat does feel a little overpowered, and with no ammo limit, I would usually keep any melee item on me and only use my gun when I absolutely had to in order to save ammo.

Juicy Realm is beautifully drawn and evokes art styles that remind me of Plants Vs Zombies and Scribblenauts. It's cartoonish, fluid, and eye catching, and both the enemies and the levels have an amazing amount of detail to them.

However, some of the sections of levels tend to bleed together. I had a hard time seeing things in the Desert Area, and that was mostly because of the never ending sandstorm. Maybe this was on purpose, but I ran to my own death more than once because I couldn't tell what was what or where I was going until it was too late.

The enemies are extremely well made, and very diverse in design. Watermelon ninjas, apple rambos, pear soldiers, the list goes on. Unfortunately, the music is... well, nothing spectacular, to be honest. While it is catchy at times, the tracks are more a random collection of sounds put to a melody than an actual score, so if that's your jam go for it.

Juicy Realm is a fun Roguelike that feels gentle enough to be fun for casual players or first time rogues, but does become challenging enough to constitute multiple playthroughs. The characters are fun, the world is interesting, and the story is engaging. It's simple and enjoyable, with tons of variety of flavor.

Juicy Realm Review
Pros and Cons
Bright, fun world
Great character design
Addictive gameplay
Funny
Slow gameplay may turn some off
Level diversity could have been better
Can get repetitive 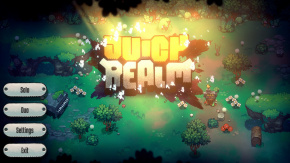