Full Metal Furies is a third-person, 4-player action RPG, with elements from bullet hell and MOBA games thrown in. You and and up to three friends control a team of warriors called the Furies, made up of Triss the Tank, Alex the Fighter, Erin the Engineer, and Meg the Sniper. Each Fury has a set of abilities unique to their class, along with strengths and weaknesses that play into the aspect of teamwork.

Full Metal Furies is a team based addition to the genre, and it's largely where it sets itself apart from other, similar titles. You traverse levels and defeat enemies, earning gold you'll use to purchase upgrades as (like extra health and damage, and ability modifiers) and gear (sidegrades that change the function of abilities). For example, Meg's B ability slows time and shoots a fiery bullet, which can be upgraded to slow time more potently, or swap the fire for a larger explosion that does less damage. If playing solo, you choose two Furies and switch between them at will. Enemies get shields that match one of the Fury's class color, and only that Fury can deal damage while the shield is active. This requires the team to properly assess their targets, lest they pointlessly attack an enemy with a different colored shield.

A diverse cast of enemies routinely hop in from the edges of the screen to get in your way. From regular soldier dudes to giant minotaurs sporting machine guns and shadowy sorcerers that curse and silence you, there is no shortage of interesting foes.

Levels tend to be quite short and are separate from one another, connecting via an overworld. Besides the main path, there are plenty of alternate routes with lots of secrets to find in both levels and the overworld. Secrets consist of gear blueprints you'll need to expand your arsenal and Rosetta Stone fragments that play a role in finding the true ending.

As far as the story goes, the Furies (and Go Cat, a cat that tells you to, well, go) embark on a quest to defeat the Titans that rule over mankind, restoring the world to its former glory by using their unique weaponry, skills, and quirky dialogue. Many elements in the game seem to be inspired by classic Greco-Roman characters and themes, and the game takes a unique spin by infusing modern weaponry and equipment with mythological beings and settings, to great effect. The plot is light and focuses on humorous interactions between the Furies and their adversaries, which works almost every time. Occasionally, a moment is taken to provide some deeper developments towards the world at large and the true consequences of the Furies' actions.

FYI: This game is not designed for solo play. The option exists, and I completed the game once through solo, but many un-fun kinks arose that almost put me off the game entirely. You will have a much better time when in a group of friends, as that is the intended experience.

This game is all kinds of pleasing to the eye. Characters are represented in the world with serviceable pixel sprites; most characters have clean, whimsical illustrations for dialogue sequences. The world has a very painted feel that is easy to look at and clearly distinguishes things that are breakable or will do you harm, as those are also pixel sprites.

Each character is pretty limited in their breadth of animations; in reality, they only have one set of animations that is flipped depending on the direction they are facing, and there is little articulation for their actions. When attacking, enemies often have a small wind-up, after which they immediately perform the attack. Blocking, dodging, and parrying attacks will take a serious commitment to learning each enemy's patterns, as the window for properly avoiding damage is incredibly tight and hard to read. Additionally, enemy attacks deal damage in a large area around them; I was often struck much earlier and from further away than I expected.

There are distinct sound cues to almost every action by players and enemies, and the mixing of each element is evenly distributed as to not overwhelm your ears. There are a few odd choices, such as Triss' shield sounding vaguely like a basketball (or at least that's what my brain is telling me). I find the voice clips to lack much impact, and they do well to remain sparse. Music tracks are numerous and fit the tone of the game. It never overwhelms what is happening onscreen, just complements it.

A fun experience. Pleasing to look at, and provides considerable challenges to tackle. You and your friends will have a great time going through all the levels, and there clearly is a lot of love and care that went into this game. There are some issues that are hard to overlook, like the extremely limited animations and an endgame that is little more than clue-hunting, but these problems are overshadowed by the game's strengths. 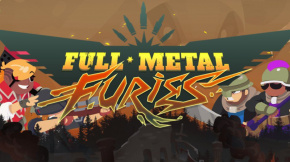