Quality Earbuds At A Good Price

Bluetooth headphones have always been hit and miss for me. Many pairs that I’ve tested in the past have given me problems, whether it’s connectivity issues, poor build quality or just bad sound, and that goes for the high-end models and brands as well as the lower-end stuff. I’ve ended up going back to my wired earbuds time and time again, so when Vava sent me their Moov 28 bluetooth earbuds, I was skeptical. After getting burned by some of the more expensive brands, how would a pair of under $50 bluetooth earbuds fare?

Straight out of the box, I was pleasantly surprised with what I found: a well-constructed drawstring pouch, three pairs of differently-sized ear loops and three pairs of ear tips, a short charging cable, the earbuds themselves and a clip. I set the clip aside, fiddled with and swapped around the different sized loops and ear tips, found some that fit and then paired the earbuds to my phone, which was a simple enough process of just holding down a button. I loaded up my metal mix, double checked the fit of the loops, and went out for a run.

I ended up running about a 1/3 of a mile before turning around and running right back home for that clip. Without the clip, especially while running or moving around quickly, the plastic piece with the volume/connectivity buttons on it weighs one side of the earbuds down, making them feel a bit unbalanced. Even if the extra weight doesn’t pull the earbud free, the plastic piece bangs against your chest and causes an irritating noise. Clipping it to your shirt or a hat stops this from happening, and I didn’t have any further problems on my four mile run.

The buttons themselves have a pleasant “click” and a nice, tactile feel that doesn’t leave you fumbling around, even when running down the street. They seem to be made of quality materials, from the unit itself to the flat, "ribbon style" cable that should keep the cord from getting tangled in the pouch. The backs of the earbuds are magnetized, and the magnet is of decent strength, enough that when I pull them out of my ears and drop them, they usually grab onto one another. It’s a small but nice feature to have when you need to take them out and hang them around your neck.

The sound of the Moov 28’s are better than they have any right to be at this price point. The highs are nice and crisp, and although these are by no means “bass heavy” earbuds, the lows are definitely there, and they pack enough of a punch that I didn’t feel like I had to toss rap out the window; not even close. These aren’t going to give your Bose a run for their money, but these also aren’t going to crush your wallet like Bose would either. I fielded three calls with these as well, and they came through loud and clear, without any delays or drops. Speaking of loud, at max volume, these were just about where I would want the levels to be if I was really rocking out, but I’m kind of glad they don’t go much higher, because I have already damaged my hearing enough. Some may wish they got louder, but for me, it's almost the perfect volume.

After wearing these for three hours, I experienced some minor discomfort, but overall, these sit nicely in the ear, and the loops are soft and bendy, but  firm enough to keep the earbuds in your ears. I tried every fitting and found that with a little fiddling, these sit well, and actually block a decent amount of outside noise as well. As far as battery life, the Moov 28s held up well, giving me hours of listening before I had to recharge them. If you unpair the earbuds, they'll shut themselves off within about 10 minutes or so, which helps to conserve battery life.

To get your own or get more information, take a look at their site, here.

If you are looking an inexpensive pair of Bluetooth headphones for working out or just everyday use, you’re going to be pleased with this offering from Vava. While they aren't going to compete with $200 pairs, at their price point I haven't heard much better.

Vava Moov 28 Bluetooth Earbud Review
Pros and Cons
Great sound
Easy to set up
Build seems to be quality
Good battery life
Might not get loud enough for some
If you lose the clip, it will be hard to use these for working out 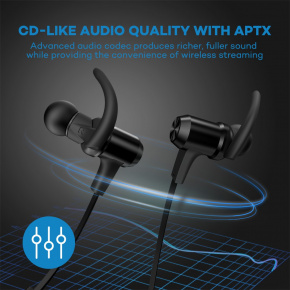