You are the last of an ancient group of warriors, trying to stop the towering monsters known as Ravenii from wiping out humanity. You begin each level by powering up your Ravenii-killing final sword-strike by either chopping a Ravenii's legs and arms off multiple times (they respawn), or killing the smaller minions, called Jackals, before the Ravenii can destroy the city's life bar.

The story is an interesting idea wrapped in a boring package; humanity is facing extinction from the Ravenii, a race of towering ogre-like creatures who have nothing better to do than stomp buildings to dust. You are Avil, the last of the Sentinels, a pack of badasses with the knowledge and prowess to kill the giants. Your partner, a woman named Xandra, is an annoying voice in your ear that never tells you anything you really want to know, especially in combat. You make a last ditch deal to save humanity with King Yarrow, an unappreciative, snooty dick who seems to not care or realize that you are literally the only person on the planet that can kill the Ravenii. In light of that info, shouldn't you be king by default?

Although the story does offer a few twists and turns, it's painfully straightforward for most of it, and exposition comes to you 10% by nicely animated cutscenes, and 90% by talking heads who basically have nothing to say. This should be a rad world, facing EXTINCTION every single moment, but the combo of inane dialogue, bright, cheerful voice acting and a complete lack of urgency makes it really hard to buy that these people are an afternoon away from getting wiped out.

We also experienced what I hope is a bug, causing Xandra to comment almost non-stop through the first hours about what I am doing in combat, with a deep pool of about 6 comments to draw from. How many times do I need to be told to chop Ravenii heads off when my sword is charged after the first hour of the game? Xandra and the king weigh in so often, in real time, that you have to wonder; are they sitting in a sports bar watching me fight on TV?  Why they are just standing there, staring into a friggin scrying crystal while hundreds of citizens are smashed into paste? Couldn't they be evacuating or something?

The game is broken into 4 different actions: killing jackals, killing ravenii, rescuing citizens and traversing the environment. Since you are facing "extinction", every mission is a defensive one, which wears thin quickly. There are objectives, but there is almost no variety to them. You either need to save the city from losing X amount of structures, save X amount of citizens, kill X amount of jackals or ravenii, but in the end, a Ravenii is coming, you gotta stop it before the meter runs out. That's about it. This could have been fine, if there was a wealth of variety to be found in the jackals or ravenii, or your attacks but there isn't. There just isn't. Often, I felt like I was playing an optional mode for a bigger, better game instead of the game itself.

Combat is similarly disappointing. The jackals come in about 6 flavors, but really, they come in two; ones that fly and ones that don't. All others are just slight variations, with more hitpoints. You only have one button for combat, which is a damn shame, considering this is the team that made Killer Instinct. The whole reason I was excited for this is because I thought it would play like Devil May Cry meets Shadow Of The Colossus, but it isn't even close.The combat is bland, and although you can execute combos with delayed button presses, there isn't much to it and it doesn't really change how you fight. You fight almost every jackal and every Ravenii the same.

The big combat shakeup are the types of Ravenii armor, which you must chop off before killing the beasts, but even that gets boring in about 10 minutes. You must hit the armor's weak points, and sure, some armor will hurt you if you miss, and other armor has smaller or more/less weakpoints, but each new armor ends up being more frustrating than challenging, especially the final armor, that requires you to wait on the giants to execute a certain attack before you can do anything, and while you wait, they are destroying the town wholesale. Fun.

Most of the game's problem is the movement. Everything is very "floaty" and although there is a small skill tree, nothing there really made me feel like I was getting that much more powerful or quick. Your grappel/zip line is a bit of a chore as well, often zinging you in the wrong direction, and coupled with the floatyness, it just isn't very enjoyable. Climbing up the massive Ravenii, dodging their attacks, using the zipline on the giants that have hooks to connect to... none of it is very fun. Halfway through the game, I stopped and groaned in frustration. I know how this game should feel. It should feel like a Spiderman game, hell, a Tony Hawk game. I should feel in control. I should be flying and dashing through the air, avoiding big, nasty strikes mid air, hooking onto and arm, running up, lopping it off at the shoulder and boom! I'm airborne again! But that's not how it is. Compounding all this is a limit on how high you can raise the camera. Often, I would be trying to chop off an arm or leg, and I was a millimeter from striking the sever-point, but the camera wouldn't reach. So, I would have to fall, then start all over again.

The graphics are nice enough looking, but the style is somewhat of a strange choice in my opinion. It doesn't really match the desperation I assume I am supposed to be feeling. The sound is just ok, nothing amazing, although the decapitations sound nice. The voice work, like the graphics are often too chipper for me.

Extinction wastes its premise and is something of a one trick pony. Not a terrible game, and there are a few thrills here and there, but they wear off quickly. 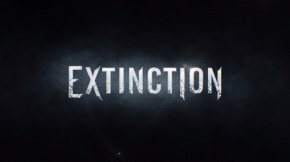