The good folks over at Die Hard Dice sent us a couple sets of their metal dice to test out, in addition to a rolling tray. After using them for several sessions, they're my new favorites! Here's how things worked out:

First off, it is important to note that these are metal dice, so they are noticeably heavier than your usual plastic dice, and as such, they could easily put a dent in your dining room table. A rolling mat is highly recommended. If you don't have one or prefer not to use one, notebooks or several sheets of paper will do; just be careful not to roll them off of the paper, or you can do some damage. The dice also come with storage cases that can be used as rolling trays, in a pinch.

In some brief testing and constant use by both DM's and players, we have found that these dice roll well and consistently – just as many 1's as 20's, from what we can tell, with no bias toward any one number; in short, these are very nicely balanced. They have a bit of heft to them, and feel good in your hand.

Just one warning – Try not to step on them, for the same reason as LEGOs. The D4's in particular :)

Size: Almost exactly the same as standard Chessex brand dice. Originals are slightly smaller (0.5~1mm smaller for most), while the Gothica and Precision dice come out either precisely the same size or slightly larger (generally 0.4~1mm larger; 2mm for Gothica d20).

They also sell polymer dice ($5~8 a set for most); spindown, Counter, and other specialty dice for Starwing/MtG ($8 and up); and accessories.

These are top notch, extremely pleasant dice. They are my new favorites, and if you want some amazing metal dice, these are for you.


Metal Die Hard Dice Review
Pros and Cons
Look and feel amazing. Nice heft for something so small
Perfectly weighted – in several weeks of regular play, they have rolled a roughly equal number of 20's and 1's
D4's, D8's, and d10's are basically metal LEGOs, due to the sharper corners
You don't wanna step on these. Also, can easily scuff other dice or get worn edges if stored “loose” with one another or with other dice Don't roll these on an unprotected tabletop
D4's are just as much of a pain to pick up as any other, but that comes with the territory 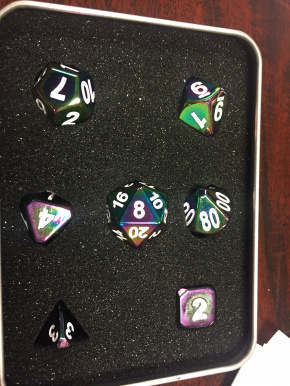