Attack of the Earthlings

Attack Of The Earthlings Review

Attack of the Earthlings is a turn-based tactical title that flips the "humans good, aliens bad" on its head. Brought to you by the imaginative minds at Junkfish, AotE places you in the role of alien monsters who are dealing with an invasion of the deadliest creatures in the universe- humans. Filled with trope-busting humor and creative gameplay, your alien consumes humans to create minions, who each have unique skills and upgrades that you'll need to defeat the human menace.

The story finds you controlling a race of aliens fighting the evil conglomerate Galactoil, who just crashed a space-faring skyscraper into your planet, killing your people and draining your planet’s resources. As the Matriarch of the aliens, you have the unique ability to consume humans and produce alien offspring, so it's up to you to infiltrate their tower, stop their infernal machines, and take revenge on the corporate fat cats and their workers. Along the way, players are treated to genuinely funny gags and characters that feel like they could've worked for Portal's Aperture Science, which really ties the whole thing together beautifully.

The gameplay is very similar to X-COM, only you play as aliens instead of humans. While your Matriarch is powerful, she’s also your lifeblood; if she dies, you lose (think Hero units in Warcraft 3). You’re often forced to decide whether it's worth risking her life for the extra damage she can deal, and it leads to some tense scenarios. She can’t hide easily, and she’s too big to fit through most air ducts, so you have to be extra careful with how you use your queen.

Luckily, you have plenty of other units, and they come in a variety of murderous flavors. There are grunts, which can be upgraded into stealth, armored, or ranged units, and each type is suited to defeating a certain kind of enemy. Add in the ability to mind control a human and turn them into a scout or decoy, and you have a pretty robust set of human-killing options.

For example, your Stalkers crawl through air ducts, set traps, and backstab those annoying heavy weapons units for maximum infiltration. If a straight fight is more your style, your Goliath is a heavy hitting, defensive tank, allowing you to lure you foes to you, then unleash a massive smash attack. If attacking from a distance is more your style, the Disruptor can lay decoys, blind opponents, and then take them out from afar.

You earn Mutagen based on how you did in each level, which you can spend in between stages. It’s a fun upgrade system, but the game is almost too kind here, allowing you to refund your points at any time, letting you experiment with different load-outs freely.

While I do love the game, it's not perfect; it's just hard to stay mad at a title with this much charm. If I had to nitpick, I'd say that advanced gamers may find the challenge to be a bit lacking, and since there's only seven levels, veteran players could blow through the entire game in just a couple nights. I wished there had been just a few more stages to play through, as I felt like I was really hitting my stride right when the game ended. With a very forgiving save system and predictable enemies, I never felt like I was really challenged, but I can't deny that I was having fun the entire time.

The graphics are delightfully cartoony, which goes along really well with the humor. The sound effects are great as well, with all the gory splats and gooshy sounds serving as a perfect soundtrack to the action.

All in all, the game is a blast. Even if you aren't a fan of the genre, you will still have a great time, especially with the game's story (there's a freakin' unicorn in there!) The humor is great, the gameplay is fun, and while it might be a bit lacking in difficulty, you can't deny the game has heart- usually splattered all over a Galactoil work console.

Attack of the Earthlings 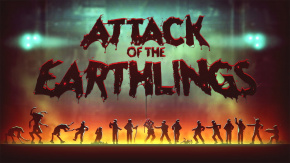