For those who don't know, I love roguelikes. I love them. Binding of Isaac, Dead Cells, I'll even replay games that get mods with roguelike elements for them. But one thing that a lot of roguelikes have in common is a tendency to be bullet hells or just throw a whirlwind of chaos at you to see what happens. In short, it's rare that you find a true tactical roguelike. Then we have Roguemance, a new 2D, tactical, romantic roguelike from Lucas Molina.

The story of Roguemance is rather straightforward. The Heartipelago, a massive, heart-shaped island, has been split in two by an erupting volcano. You, the hero, must mend this gigantic broken heart. You begin your journey alone, but by the end of your quest, you may find your one true (digital) love.

Everything in Roguemance is procedurally generated. In the beginning, you customize your Hero, and choose from one of three classes: Warrior, Mage, and Ninja. Each class has a different set of moves, and largely determines your play-style and how effective you are in battle.

The battle system is very simple to learn, but it can easily become a train wreck if you aren't careful with your moves. Everyone moves at the same time during fights, but you can choose what you want to do, and which direction you want to face before you engage the enemy. You can see your opponent's upcoming move as well, so if you have the proper defenses in place, you can avoid damage altogether, or even get enemies to attack each other.

When you have a partner by your side, battle gets a bit tricky. You don't get to choose what ability they use, but you can pick the way they are facing. Things get surprisingly tough as you multi-task to keep you and your "date" alive while slaying the monsters trying to take you down. At the end of the fight, you have the option to show mercy or kill the defeated monster; showing mercy increases your Heart Gauge, and when it's full you gain an additional Hit Point, while killing the monster earns you money, which you can spend on abilities, health and so on. However, your date will have an opinion on this as well (don't they always? Heyooooo!), and not listening has consequences. Siding with your potential love causes their heart gauge to fill, and ignoring it will leave it where it's at. Its a fun juggling act, and depending on how badly you need health vs how much you need money, you might turn into quite the little executioner.

Maps are of a branching nature, and are also procedurally generated. Sometimes you can see what you're getting into, other times a fog of war obscures the path. You have to choose whether to take a risk on the unexplored, or take on a fight where you know your enemy. In between brawls, you can visit Taverns, where you pick up dates to accompany you on your journey, grab health potions for recovery, and more. There are also Gold Cats who run ability shops, and visiting them allows you to change your loadout, while Black Cats give you a random ability.

Roguemance is presented in a pixel art style, reminiscent of Molina's previous game, The Painter's Guild. It's simplistic and 2D, small enough to be charming and large enough for a good amount of detail. Everything leans hard into the heartbreaking premise, with levels and paths getting cutesy, tongue-in-cheek names, like Morning Woods and Coldheart Peak. The sprites look great, and are surprisingly emotive, even when you just have a character bouncing up and down and letting out a small laugh. We loved the look of the game.

The sound design is similarly well done and fitting, with soft music for wandering, engaging tunes during battles, and a host of simple but well placed little sound effects that really tie the game together.

This game is packed with charm, and is incredibly easy to pick up and learn. Mastering it requires strategy, but you can easily turn off perma-death, or even play with a friend! No matter how you decide to play it, Roguemance is a fun game and well worth the Steam Price. 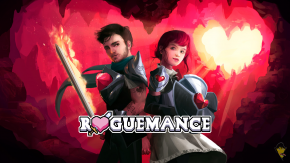