World to the West

World To The West Review

World to the West is a quirky, challenging adventure game from the studio that brought you Teslagrad. Filled with a myriad of peculiar characters, beautiful landscapes, and frustrating but often clever puzzles, WttW is definitely something adventure fans should take a look at.

The gameplay is reminiscent of a top-down Zelda title, in the vein of Link to the Past. Much like Zelda, a good chunk of the challenge is simply figuring out where to go. Combat is often almost secondary and, in fact, two of your four characters are pretty much encouraged to avoid combat all together. For the bulk of the game, while you're given the illusion that you're free to roam anywhere, the reality is there's a very specific, if ill-defined path you must traverse. Anything else results in death and dead ends. Where you can actually go and what you can actually do is limited by which character you're controlling and what abilities they've unlocked.

The game puts you in the shoes of four protagonists: Lumina, an electricity wielding Teslamancer, Teri, the mind-controlling adventurer, Knaus, the young but brave miner, and the big man himself, Lord Clonington, the mustachioed, bowler-wearing, strong man. While you have access to multiple characters during most chapters, you only control one at a time.

Until the final chapter, you're generally given two characters that must work together, utilizing one another's abilities to reach the end goal. Teri uses an exploding squirrel, for example, to destroy boulders that would otherwise impede Lumina from reaching the next screen. The catch is, that progress is gained individually. There are totems across the world that act as teleporters and automatic save points, allowing you to instantly travel to any other totem you've discovered. The problem is, the discovery only counts for that specific character. If you get through a difficult area with Teri and reach a new totem, she can travel back and forth between them, but Lumina, for example, cannot; you'll have to retread that ground again with a new character, and that can get tedious.

One aspect that falls rather flat is also unfortunately the core of the game; exploration. Since the four characters all maintain individual progress, you'll end up retreading the same ground again and again. Furthermore, there's no way to mark your map, swap characters on the fly, or even see where the nearest unlocked totem is. Combat is awkward at best, and some areas rely heavily on bulk enemies, which is a problem when you don’t know where to go. In this case, prepare to die over and over, and play the same areas repeatedly. And without the ability to save manually, you will be (say it with me, class) retreading the same ground constantly.

One last little note on the exploration. I must be a strange outlier, because on more than one occasion, I ended up in an area where the character I was using wasn't supposed to go. Hunting for one of the game's McGuffins, I managed to sneak Teri into a location apparently meant for Knaus. Once down there, I was stuck with no way out. If I didn't have a bag of enemies on me (her powers are weird, but cool,) I couldn't have killed my character to reset her to the last totem.

The visuals are beautiful, with a throwback style reminiscent of PS1 graphics, and the music is fantastic. On top of this, game's humor is top-notch; it never takes itself too seriously and even takes the time to call out common game tropes, though it immediately indulges in said tropes itself.

Overall, the game is certainly worth playing, but don't go into it expecting a Zelda-like experience. While beautiful and fun, it lacks the polish and attention to detail that gave the Zelda franchise its charm. Too many times I solved a puzzle in a way the developers didn't intend and almost got stuck permanently. Still, there is more than enough good stuff to warrant a play through, just remember: this is World to the West, not Zelda. Play it for it's own merits and you'll find a decent enough experience. If you can figure out the path there.

World to the West 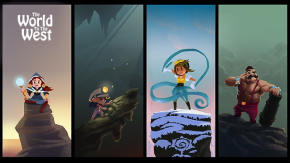