Two Worlds. Antaloor. Gandohar. Pirates of the Flying Fortress. Ringing any bells? Maybe a faint, pleasant chime? If you aren’t experiencing total recall, don’t worry, it’s been a while for everyone. I’m talking about the RPG series, Two Worlds. And finally, it’s back.

If you are totally in the dark right now, allow me to refresh your memory. The Two Worlds franchise began in 2007, the product of TopWare Interactive and their in-house developer, Reality Pump. Two Worlds was fun but flawed, while Two Worlds II fared much better, earning itself some awards and a cult following. The huge DLC that followed, Pirates of the Flying Fortress was the crown jewel of the series so to speak, earning itself high marks from reviewers and reverberating with fans that were eager to return to Antaloor for another RPG adventure. The series had hit its stride, and it looked like gamers were ready for more Two Worlds. Since then, over half a decade has passed between Pirates and this all-new DLC, Call of the Tenebrae. The question is, was it worth the wait?

I am pleased to tell you that the new DLC succeeds on multiple levels. First off, much like Pirates of the Flying Fortress, Call of the Tenebrae is a large DLC. The game is easily over ten hours long, so big that TopWare Interactive just released it as a standalone game, which makes sense, given the depth of the title. Throw in the side-quests and optional activities, like playing musical instruments and various dice games and you are looking at an easy 15 hours altogether. In addition to the game’s length, Call of the Tenebrae comes with an HD upgrade and has multiple new features, including huge boss fights, something that was surprisingly missing in previous titles.

The combat will be familiar to anyone who has played the previous games or action RPGs in general. The archery build has a robust selection of bows, arrows and accuracy-enhancing armor, along with a host of attacks that are varied and fun to use. The multi-arrow is a great crowd-controlling attack, while ice, fire and poison arrows give you a variety of ways to tackle foes. I occasionally wished for a strong melee attack in some circumstances, but you always can fall back on your dagger or short sword, which you can enhance and upgrade to give it some punch. I never felt like I was missing out with the archery build, and actually, when I was playing through other builds I sometimes missed my trusty bow, although melee and magic characters can utilize them effectively with a few well-placed skill points.

The melee build has been revamped as well, with myriad ways to dole out damage. The shockwave attack is great for swarms of enemies and there are a few lunging attacks that are quite satisfying to use if you can line up your strikes correctly. There are a good amount of stun attacks as well, allowing you to smash an enemy in the face, then slaughter him with a laugh as they stand there like slack-jawed dummies. All new weapons and armor compliment the build, along with offensive and defensive crystals you can implant into all your weapons, giving your strikes some serious punch. I wish that they would have included more attack animations, as it does get a bit repetitive to repeatedly see the same strikes again and again, but overall the attacks are satisfying and fun to pull off, especially when you chain special attacks together for maximum impact.

The mage build is the real star of the show, much like the previous Two Worlds titles. The different ways you can dole out magical damage is simply astounding and few games before it have given the player so much freedom when it comes to crafting their own spells. Want to kill an enemy and then suck it up into a defensive whirlwind? No problem. Want to pull random detritus into said whirlwind to give your “shield” more punch? Go for it. Still not happy? Maybe you want to electrify it? Go right ahead. What else could you want? Oh. There’s an enemy archer coming towards you, bow at the ready. Crap. You’ve built this defensive shield, so how the hell will you…oh, yeah. You can fire the entire electrified mess at your oncoming foes. Welcome to hell, you rat-bastards.

This is just one example of how crazy you can get with your spells. You collect cards as you traverse Antaloor, and the more you collect, the more nutty you can get. Light things and enemies on fire, kill foes and fling them at their friends, reach out, force-like and draw items to you to use offensively or defensively…the world is your destructive oyster. It ends up being a lot of fun, and I definitely spent more time than I should have just messing with cards and trying out new ways to raise hell as a wizard.

The enemies you encounter are varied and for the most part, “pretty”, as much as hideous “snake-bats” and disgusting half-cyborg rats can be. The graphics aren’t the most amazing thing in the world, but the HD upgrade goes a long way towards bringing the series to the next level and this is hands down the best looking game in the franchise. I found myself wishing that enemies were a bit smarter at times, but whenever I started wishing for a tougher challenge, I would run into a giant stone golem with his pumping heart hanging out of his chest, or a winged horror dodging over my attacks to smash me into the ground and shut me up. Overall, enemies could be more intelligent, but the game does a good job of “correcting you” if you wander into territory you aren’t ready for or checking you if you try to speed-run to a boss you aren’t quite prepared to face.

The bosses themselves are the stand-out enemies, and most do not disappoint. Hulking swamp gods, evil bandit leaders and hideous, crawling freaks await you and they are fun to fight and figure out. Some are a bit too easy, more flash than substance, but the set-up is always good, and a few, like the Dagon in the swamp, had me scratching my head until I figured out how to beat it. You can tell the developers had big bosses in mind this time around, and it’s nice to see that they put real effort into making these battles the highlight.

Much like the magic system, the alchemy in Call of the Tenebrae is robust as all hell. There are dozens and dozens of ingredients to find and mix and they (mostly) all have different effects and durations. You can come up with some pretty inventive potions, and sometimes you have to wonder if even the developers knew what players would do with so many ingredients. Mixing and matching some ingredients can lead to potions that can almost make you overpowered at times, but usually the ingredients are rare enough that you can’t just spam potions to get through. For me, the potion of seven jumps started off seemingly cheap but ended up being a lifesaver, especially when I was far from a teleport or I wandered foolishly into a bandit camp and was in the process of being rocked by overpowered foes.

The story isn’t mind-blowing stuff, but it keeps with the themes set up in the previous games and is a lot of fun. Once again, there is an evil plot against the good inhabitants of Antaloor and it’s up to you, the Hero, to stop it. There is a good tie in with series-favorite Dar Pha, the half orc, half human love interest of the Hero, and it ends with a reveal that is sure to please fans of the series while simultaneously setting up the sequel. A lot of the side-quests are pretty funny and a few had me laughing out loud, especially with the stellar voice acting of the hero. There is the usual find and destroy, “collect X amount of this item fare”, but some really push to break out of that mold and it shows. There are some great characters in Call of the Tenebrae, and the writers wisely keep some around for future titles.

In the end, Call of the Tenebrae is a solid successor to Pirates of the Flying Fortress and a great way to whet the appetite of fans of the Two Worlds series. There has been a dearth of action RPG titles in the past couple of years, and this latest DLC certainly scratches that itch. If you are looking for a story with light-hearted fun and a solid amount of combat, check out Two Worlds II: Call of the Tenebrae. You won’t be disappointed. 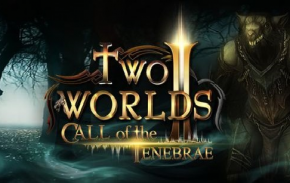