The Kindred is pretty much what you get if you take RimWorld and/or Dwarf Fortress and mash it up with Minecraft – at least that should give you a pretty good idea of what this game will eventually be. The version I reviewed on PC was Early Access/Alpha 8. The game is an indie title being developed by Persistent Studios and published by Nkidu Games, Inc.

As far as story goes, there isn’t much one – you control a pack of settlers on a Minecrafty, voxel-based world, from a 3rd-person perspective. Your crew of lovable misfits shows up in a world of your choosing, each with their own strengths and weaknesses when it comes to various skills such as mining, cooking, growing crops, crafting, etc. Specialize your characters based on their strengths, and they'll get more work done and do it more efficiently – and speed is the name of the game. Assign people jobs based on their strengths, cut down trees and mine stone to get components to build shelter. Hunt or raise animals for food, milk, wool, etc, to keep you all going.

You'll need a solid house to protect your people from the elements, beds for them to sleep in, food for their bellies, and clothes on their backs, if they're to survive for very long in this world. That's where you come in: point them in the right direction, tell them what to build/farm/gather and where to do it, and they'll work together as a team to overcome the obstacles Mother Nature has in store for them.

Current features include basic farming and crafting, hunting and gathering, and breeding local critters. Down the line, the developers’ plans include climate and weather, additional biomes, power, health and medicine, the need for hydration, dealing with predators, families and children, and more!

The controls are pretty simple: WASD for basic camera control, plus keys or mouse buttons to fiddle with the view. Click or draw a box to select settlers or define an area to work on; right click a target to harvest it or chop it town, per context. Not much more than that.

The graphics in The Kindred look like those in Minecraft, but without any textures at all. At least the cubes are nice and crisp, though. This seems like something they'll probably polish down the line, once the game gets closer to a formal release. Of course, this is all good news for anyone trying to run the game on a weaker system. The sound effects are pretty decent as well, and the music is charming, and appropriately pastoral to fit the feel of the game.

The Kindred isn’t a bad game at all – you could certainly do worse. It's definitely playable, and it's worth giving a shot. It has lots of potential, especially if you prefer crafting and building over fighting. Still, unless you’re very patient, I’d really recommend waiting until the game is closer to its final release date before putting down any money on it. I've seen marked improvements since the game first appeared on Early Access, but it's still got a ways to go, especially in its basic interface. (Review by Eric Kei)

can i have a key pls

Easy boys, it's what we refer to as a game &quot;cock tease&quot; like women sometimes do. They dangle it in front of us with no real intention to give us a access but to get us worked up.

would i got a key pls

Can i get key to test
MY email : 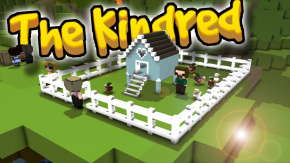