Bloodstained: Ritual Of The Night

Do you fondly recall 2-D games such as Castlevania: Symphony of the Night and the GameBoy Color games that followed it? If so, this is the game for you. This game was Kickstarted back in 2015 with an unusual method to it: the game had potential full funding waiting in the wings, but they first had to prove to the investors that people wanted this sort of game.

As such, the KS funds were to be used primarily for improvements to the base game and a slew of add-ons and new options in the form of stretch goals. The team making the game was headed up by Koji “Iga” Igarashi, one of the minds behind the great CV:SotN, among other games in the series.

Fortunately for them, the fans answered the call, to the tune of over $5.5 million pledged by nearly 65,000 total backers. This was enough to convince the investors to pull the trigger and now, despite a speed bump or two along the way, we have Ritual of the Night: a love letter to all things Castlevania; not from Konami, but from many, many of the folks who helped to create the MV genre, including composers, artists, programmers, and more – fellow ex-Konami employees of Iga's included.

In the late 1700's, The Alchemist Guild decided to seek power beyond what any human could achieve on their own. In order to do this, they began all sorts of experiments on fellow humans, such as embedding powerful magic crystals of demonic origin into their subjects' bodies. Those subject who survived the process were able to control these fell powers, and were known as “Shardbinders.” Naturally, the alchemists went a bit too far, ripping open a passageway into the realm of the demons, causing widespread death and destruction.

Fast forward by ten years, and, of course, nobody has learned a damn thing. The alchemists are up to their old tricks, and a huge, foreboding castle has appeared out of nowhere. Your character, Miriam, is one of the last two Shardbinders left, as the alchemists have sacrificed all of the others in search of even greater power. Taking care of things falls squarely into your lap, of course.

You'll wander around the castle, leveling up, finding (or crafting) cool new gear, slaughtering demons and taking their powers, until you can finally confront the guy who decided to bring the demons back (no, it's not Dracula, nor even one of his kind). You get a robust home base (with a crafter, a farmer, a shop, and no fewer than three folks sending you on fetch quests for some nice rewards, a save room, and a warp room nearby) once the game proper begins, and you'll need it. So, go forth!...Oh, and try not to let your shard/corruption level get too high. That would be bad.

Keyboard or controller (auto-recognized). Note that there is an option that reduces the (intentional) slight input lag in the game; the lag in on by default. Generally speaking: Smooth an intuitive, with some interesting new additions such as moving the right stick in order to hold Miriam's arm out (in any direction) in order to target certain abilities and to open magically-sealed doors. Otherwise, SotN fans will feel right at home. Of special note: certain weapons in the game can use special attacks – anything from throwing projectiles to power attacks to parries (and even auto-counters!).

Once you get enough experience using a given special attack (hit and kill enemies with it; standing there and whiffing doesn't count!), you will Master that skill and gain the ability to use it with any weapons from that category...and man are there plenty of weapon types! You have the standard fare such as standard swords, broadswords, katanas, whips, etc, but you also have literal combat boots (which strengthen your slide move), staves, rapiers, and even guns! Note that guns have unlimited (weak) ammo, so they're always usable, but they can be powered up by equipping bullets with armor-piercing capabilities and more; all equipped bullets are stronger than what the base gun can do, often by a significant amount. Each weapon type feels different from the others – each with its own advantages (e.g. range, coverage, damage) and drawbacks (lack of range, speed, recoil) to account for.

Oooo, pretty. Lots of attention to detail, a thoroughly gothic-esque look. One major thing to the team's credit is that they took player criticism to heart when people complained (and did they ever complain) about the poorly-lit, washed-out look of the playable beta that came out a good while prior to the actual game...so much so that they extended the release date specifically to answer their players' concerns, resulting in a much more polished look to the final product.

Music primarily by the lady who composed the SotN soundtrack, Michiru Yamana; as well as by Ippo Yamada, a veteran of the Mega Man series . . . and it shows. Classic and fitting. Thanks to the stretch goals, we also have David “Solid Snake” Hayter and Robbie “Alucard” Belgrade along for the ride, lending their voice talents to the project. There are even easter eggs – sit down at a piano, and Miriam will begin playing. If your faery Familiar is active at the time, it will sit on your shoulder and it will sing the song as you play.

Per console or, for Steam/GOG:

Additional Notes: If you have a potato PC or above, you're ok.

Additional Notes: The only potatoes you use are the tasty kind.

You liked Symphony? Go buy this game. Simple as that. Not sure? Play the free demo and then see what you think. It's also actively being patched in response to customer commentaries. Note that there are some issues with the Switch port as of launch, but the patch should be up by the time this review is published.

Simply put, this is the game we've been hoping and praying for over the last four years and it's well worth the wait.

Bloodstained: Ritual Of The Night
Pros and Cons
Beautiful graphics
Amazing soundtrack
A return to the glory days of Igavania games
Handy-dandy Shortcut system to allow you to change out entire gear/shard sets on the fly
More than a dozen DLC's incoming over the next few months, with some already implemented
Many of the incredibly detailed background elements are just that – background fluff
At times, almost too many options to decide on just one in each slot

Bloodstained: Ritual of the Night 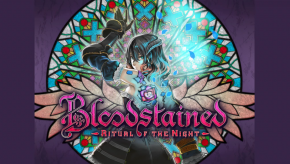 BLOODSTAINED: RITUAL OF THE NIGHT