PS4/ Action-Adventure
Developed by From Software

In Bloodborne Goes to Japan, you play as an unnamed shinobi warrior-assassin named Wolf (named Sekiro) who is sworn to protect the Divine Heir Kuro, bearer of the Dragon Heritage. When Kuro is taken hostage, Sekiro must slice, deflect, and lasso his way through the crumbling Ashina Empire to enact justice on those that seek to abuse Kuro's power. His arsenal consists of a katana, an arm, and the ability to resurrect upon dying; his enemies include samurai mercenaries, evil monks, giant white snakes, and monkeys with guns.

While very familiar, Sekiro has a particularly unique flair to it, and does not appear to rely on homages or repeated ideas to fill out its world. Rather than an action RPG with countless types of weapons and spells to experiment and build a unique character with, you play only as Wolf with only one main-hand weapon and a small assortment of off-hand tools available. The player is expected and required to master combat techniques like deflection and evasion in order to make progress.

The world of Sekiro takes place in a fictional version of 16th century Japan. Fictional in the sense that there are literally spirits and immortal beings mucking about, though most of the designs of weapons, clothing, and even characters are straight from history. The weirder parts are contrasted with real-world elements, which ends up being pretty neat. It's a lot of fun to be listening in on some real-world Japanese political intrigue, then see a monstrous, talking, undead creature come blasting into the scene.

In traditional From Software fashion, the actual main plot is very straightforward, with some general world-building done by way of short item descriptions and dialogue that instill a sense of scale and mystery to what is happening. For the most part, enough interesting events occur as Sekiro travels through Ashina's locales that you will feel invested in the story. There are a few "twists" but not in the sense that most games would employ them. As it is, the story will have you as involved as you choose to be, again, much like From Software's other titles.

The primary draw of the game is how Sekiro can resurrect himself when killed in battle. This has a variety of uses., mostly involving not really dying when you die. Though some restrictions are in place to provide some punishment for throwing your corpse repeatedly at obstacles, they are not too impactful as to be unmanageble. I will also take this opportunity to note that it's great that falling doesn't instantly kill you in most circumstances, making you feel like even more of a ninja badass as you leap from a great distance, hit the ground, then wade in and start stabbing.
Though there is much emphasis on becoming an expert with deflection and reading your opponent, the overall pace of things that happen in combat is much too fast for my taste. Many bosses have moves that are so quick that the reaction time of any average person is woefully inadequate, and different unblockable attacks are identified by the same red kanji symbol despite requiring completely different responses. Many enemies tend to be hyper-aggressive with combos that drag on too long and track your position perfectly. This might be to encourage the player to be stealthy, but that becomes moot when encountering a boss that must be killed to proceed. The difficulty is not insurmountable, just needlessly abrasive at times.
Graphics & Sound
Seemingly for performance reasons, there is little that will pop or 'wow' you, graphically speaking. Well-detailed and expansive environments are unfortunately limited to feudal wood structures surrounded by rocky crags or snow-covered feudal wood structures surrounded by rocky crags. Another design trade-off is the very square construction of buildings and environments in general, presumably to allow for grappling and climbing. I found myself very disappointed in the world design, considering how small the world really is and how often you return to areas.
Despite my reaction to the general presentation, Sekiro is still quite pretty, and has many grotesque creatures, wonderfully violent animations, and impactful sound design that complement its eastern themes. Voice work is entirely in Japanese, so I can't deliberate much on the performances, but at the very least I can say that they sound great to my American ear.

Sekiro: Shadows Die Twice is a stellar game. It has a lot of creativity and some neat moments, but I find some of its design choices to be quite flawed in how they seek to annoy or aggravate. Regardless, I recommend Sekiro to anyone who enjoys hardcore sword combat and thrilling experiences. 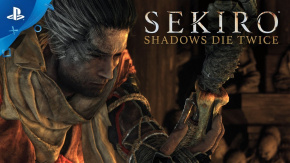