Originally given life by a successful Kickstarter campaign, Grimshade is a story-driven isometric RPG with tactical-style, turn-based combat. The combat is straightforward but not simplistic, and you can find yourself in, say, a small skirmish as a party of two people struggling against a trio of attackers, or you might have four adventurers holding back the tide as they fend off a much larger horde. Positioning is everything in combat, as you need to keep your squishy glass cannons and healers placed behind their stronger, tankier brethren if they are to survive. Knowing who does what, when they need to do it and how they should be positioned is crucial.

The game also has am interesting approach to how damage works. Characters incur damage to not only their health, but also a secondary tension meter, which can be affected by both the characters' attacks and by enemies techniques; if the first one drains, they're dead; if the latter drains, they're dizzied and helpless for a while in combat. It's not exactly revolutionary, but the system is interesting and gives you something else to keep your eye on, especially during a prolonged battle.

The story begins in a rather linear fashion, but then opens up as you progress past the first couple of hours or so. The game's setting finds itself in an cozy spot somewhere between steampunk and traditional fantasy, with the occasional nod to RWBY (especially when it comes to the shadow-like enemies with their gaping maws and exposed bones). Set in and around the war-torn city of Brann in the realm of Ree-fah, your humble town has found itself beset on all sides by strange creatures swarming in from the forest, as well as by invaders from a high-tech neighboring country who have decided that the opportunity to strike at a weakened nation was just too good to pass up. You start off trying to save the city, and in classic RPG fashion, things go off the rails from there.

The story isn't amazing, but it's interesting enough to keep you entertained and I enjoyed the characters interactions with one another. The voice acting is quite good, but the script seems a little dry, which may be because it's most likely Russian translated into English. There were some minor spelling errors here and there and the occasional awkward phrase, but overall it was not big deal and didn't take away too much from the experience.

There are seven playable characters in Grimshade, and most are pretty memorable, especially Charlie, a talking badger with a sniper rifle. Other characters include Kiba, the "dark child", Alister, who controls "dark either" with gauntlets and other weapons and devices, Ruby, who is the princess of the thieves and more. Each have their own unique style on the battlefield and you can change a lot of how your character controls in battle by changing out their equipment, which gives them access to different skills. One the one hand, this is a nice change of pace from the standard exp leveling everyone is used to in traditional RPGs, but the system does have issues.

The problem we found with this system was that, since traditional leveling is out the window, you must either acquire equipment through story or side missions, or just searching everything you come across, and I mean everything. Health potions tend to be given out sparingly, so it's important to get good items that will improve your defense and so forth. However, the game makes you search every nook, cranny and corner for equipment which will often trigger costly random battles, at times for no real reward.

Generally, if I was low on health, I'd avoid searching everything, as I didn't want to get overmatched in a fight and die, but then I'd constantly be worried that I could be missing out on a good piece of gear. The temptation would often be too much, I'd search anyways, and then end up getting caught in a battle and killed. The game seems to be aiming at a risk vs reward scenario, but often the reward can not be nearly worth it. Some more liberal dispersing of health potions would have helped these scenarios become a little less dire.

A little bit of steampunk, a little bit of Firefly, a little bit of trees with runes carved into their trunks...a good variety that makes the environments vibrant and distinct. The art style is a joy to look at, and it seems to be aping the traditional 90s JRPG with the graphical style. The sound is also well done, with very pleasant music while walking around (crucial in a JRPG), and then kicking up well in times of battle. The sound effects are well done too, with swords slashing and energy weapons humming and buzzing.

A promising game with a gorgeous art style and fun tactical combat that admittedly could have done with a little more time cooking before its public release, evidenced by some occasional glitchyness and some spelling errors. On the upside, the devs are releasing patches left and right in order to improve the game rapidly, and if you're a JRPG fan, you should check out Grimshade, especially at the $20 price point.

Grimshade Review
Pros and Cons
Great look and unique feel
Unique combat system
Memorable characters and monsters
Needs a little more time in the oven
Noticeable translation errors detract from the experience a bit
Even in small fights, combat can drag on a bit at times 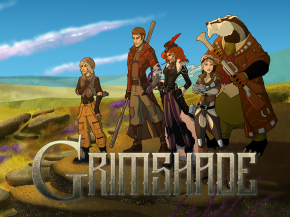