Cross the river of death and enter the realm of Niffelheim, where the brave soul of a proud warrior must survive in order to enter into the gates of Asgard.

Niffelheim is a 2D survival game that leans into aspects of dungeon crawling and horror. With a wide open world on the surface and a multi-leveled dungeon below, there's a lot to explore and experience as you visit tribes, travel to cities to trade, explore dungeons and defeat bosses in order to gain portal fragments. The point of all of this is to eventually pass on to Asgard, and the journey will be no easy feat. 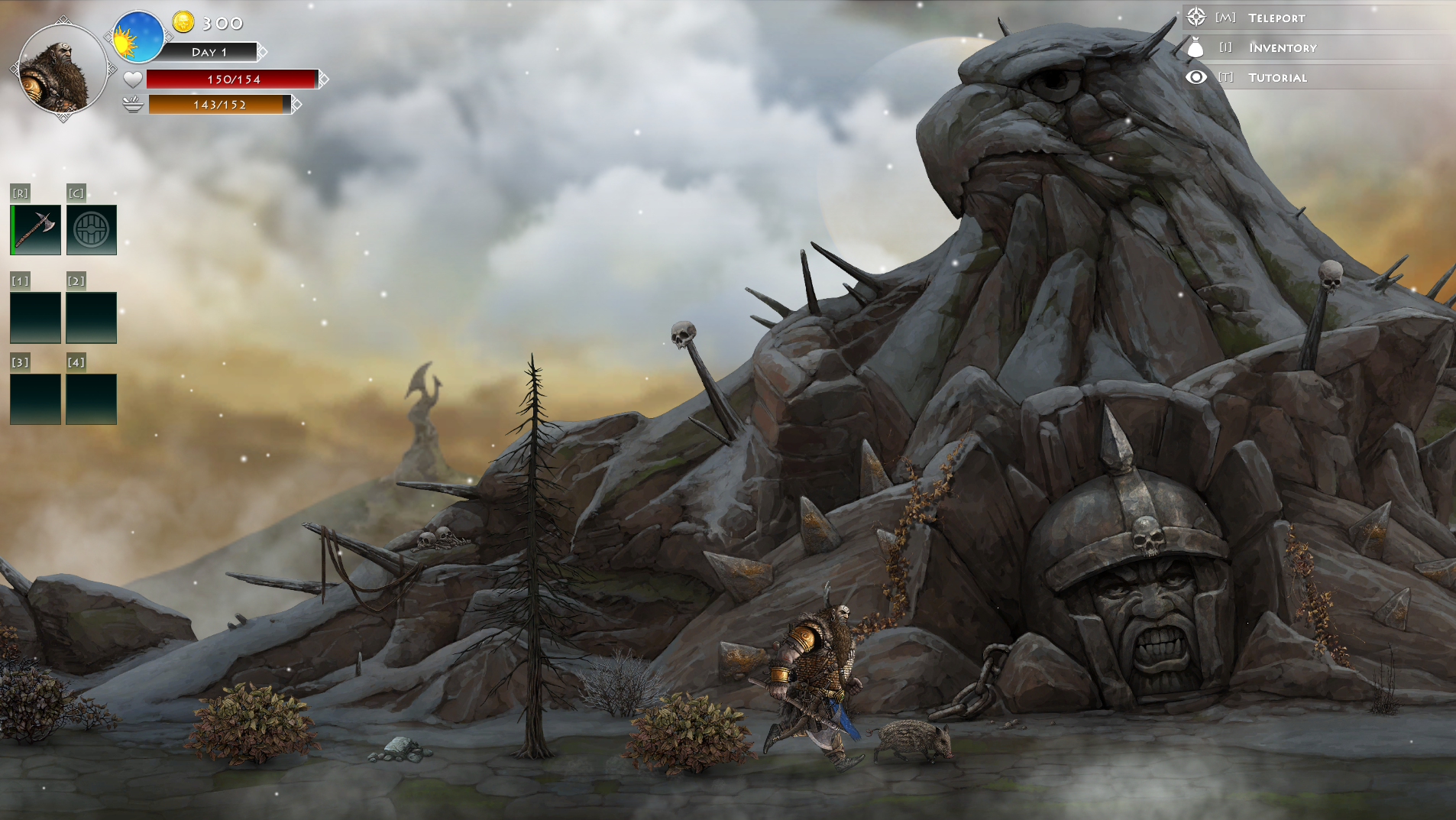 In addition to exploration and combat, you have a base that you can level and build up over time, which includes everything from a forge to an alchemy lab that will aid and supply you on your quest. There's also a giant throne you can sit in like a badass to recover health. I don't really have more to say about that, it just feels and looks awesome when you sit in it. You'll see.

A warrior on the way to the land of Asgard is abducted from his burial ship and cast into the unforgiving and treacherous world of Niffelheim. There, he must overcome the trials and hardships of the land while seeking out pieces of a mystic portal in order to finally be laid to rest. 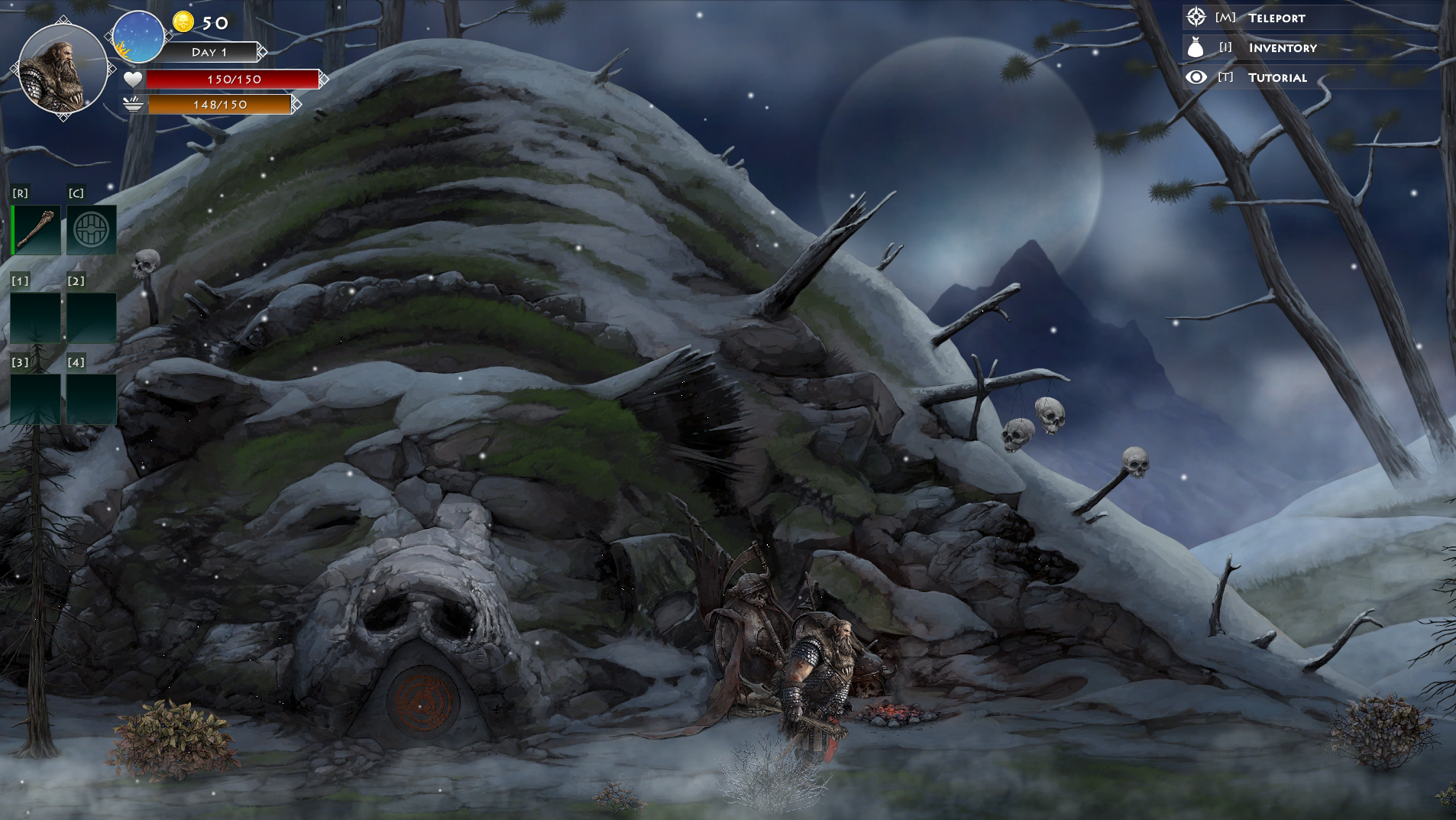 In the beginning of the game you'll have your choice of the Bear, Wolf, Eagle, or Ice Dragon, which will determine your beginning area and which clan you're from, impacting early gameplay. Also, you have various character types to choose from, including the Viking,Valkyrie, Berserker and the Shaman, each with their own advantages and disadvantages. After toying and tinkering with a few different clans and types, we determined that the game does a good job making sure there is no "best" or "worst" setup; you simply decide what works best with your personal playstyle and everything else is a balancing act. 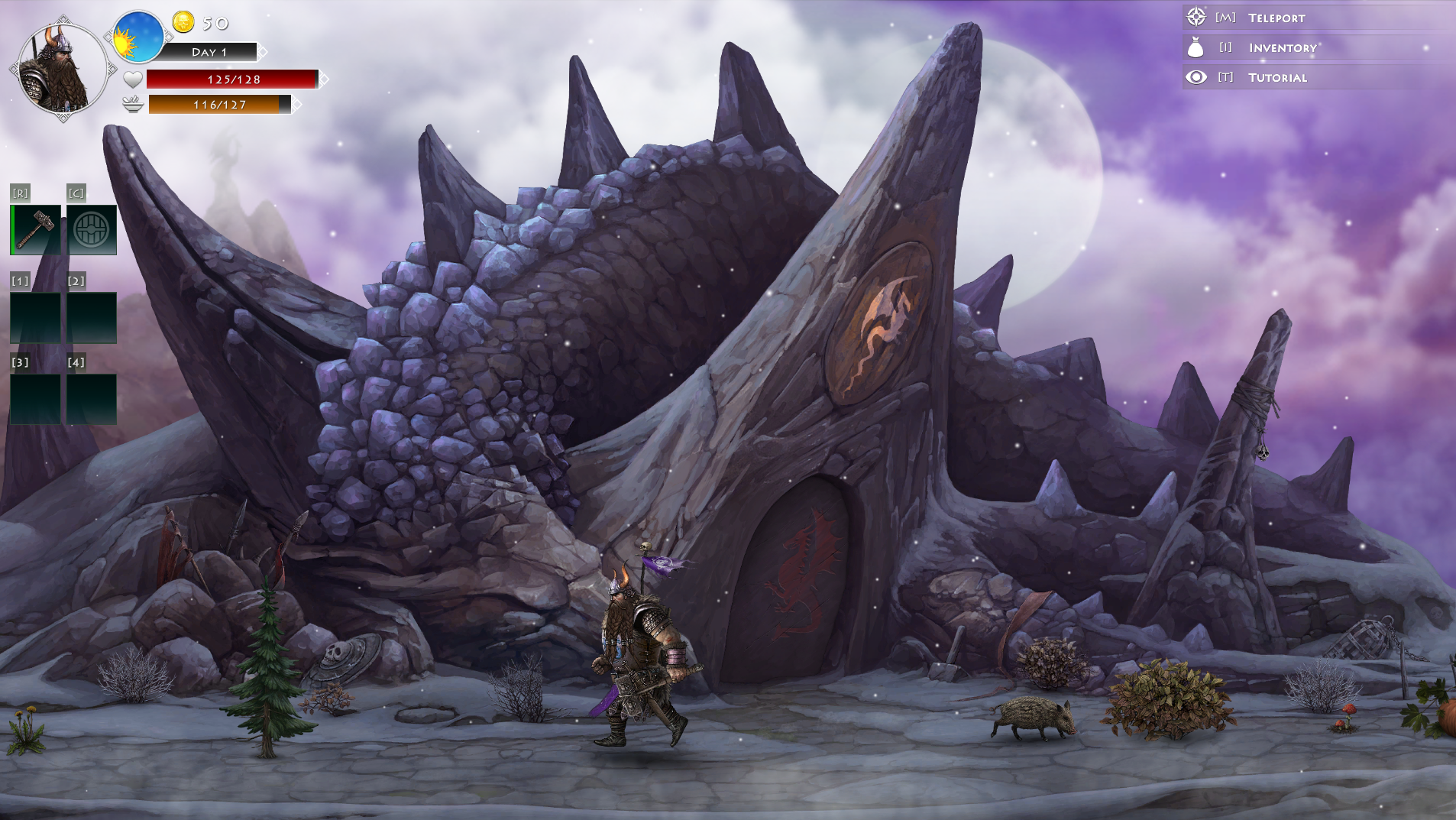 From there, you'll be able to build your base, craft a ton of items and take on quests from various NPC's, most notably the death priests, which is a badass name that you wish your metal band had thought of. These appear at random and you must fulfill them or suffer the consequences, which can go from minor to major. While I didn't mind this too much, you don't immediately realize that there can be dire consequences for not carrying out these tasks and beginning players might be somewhat turned off, as you don't really know what you are doing from the gate. In short, the tutorial has its pros and cons.

The tutorial, while lengthy and relatively well fleshed out, doesn't get you ready for the game in many ways. Basically, it isn't so much a teacher as a large collection of information that you need to look through in order to figure out how to play. The frustrating problem with this approach is that without being well integrated into the gameplay, you'll do a ton of stopping, bringing up the tutorial, reading the appropriate section to figure out what you want to know, then resuming play, then pausing again, etc. It would have been nice if the tutorial would have spooled out the info as you needed it, or been woven into play instead of an info dump for you to sift through. 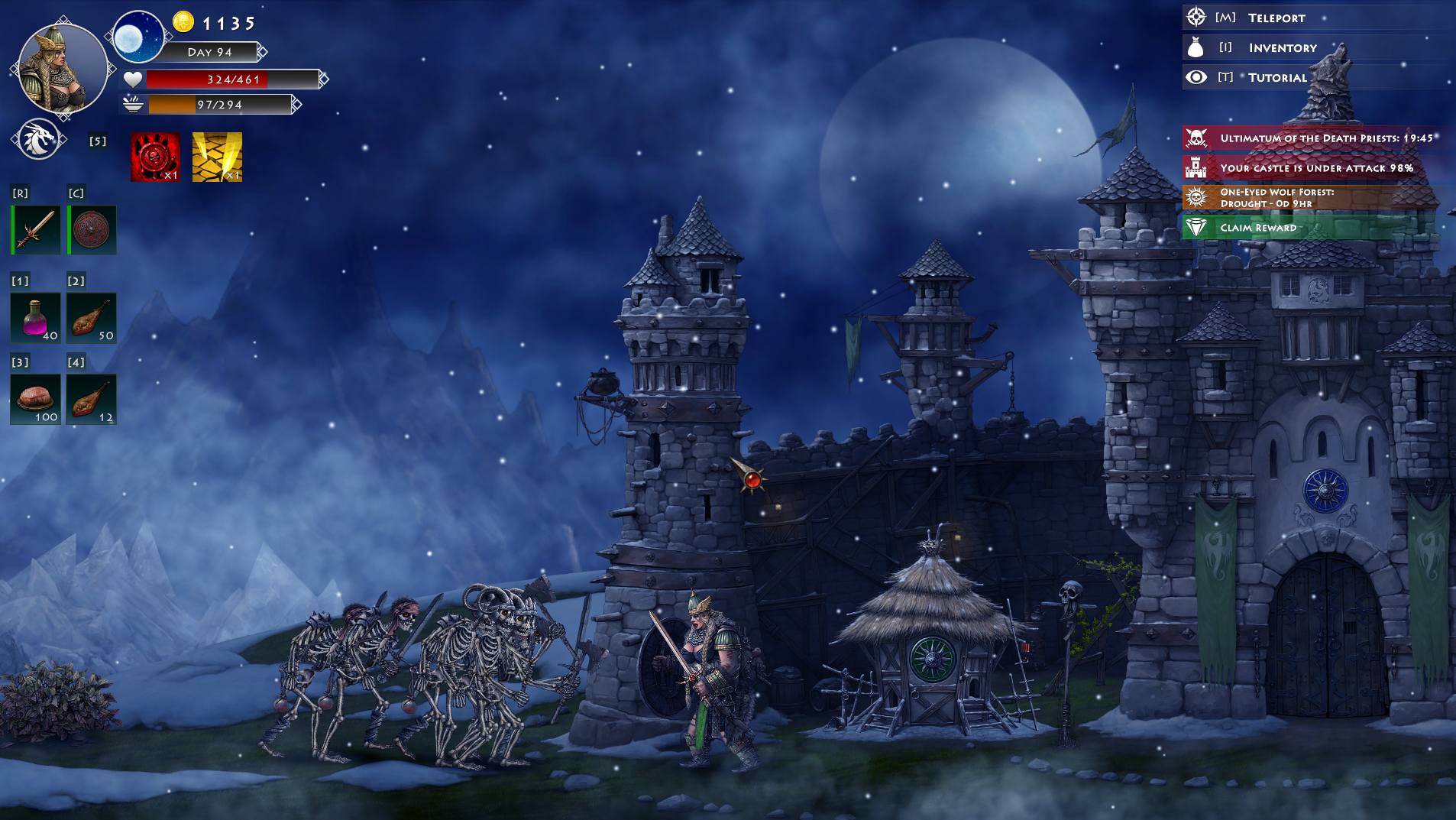 That said, you have to give the tutorial points for thoroughness; almost everything is spelled out for you, but unfortunately, this can be a problem as well. There is little to no discovery as (most) everything is laid out for you in the tutorial section, except a few concepts and game elements that I really wish would have been fleshed out more. On one hand, I felt that this takes away a chance of exploration in terms of figuring out what works and what doesn't but on the other, I could see how other players might appreciate the (mostly) straightforward clarity of this approach. 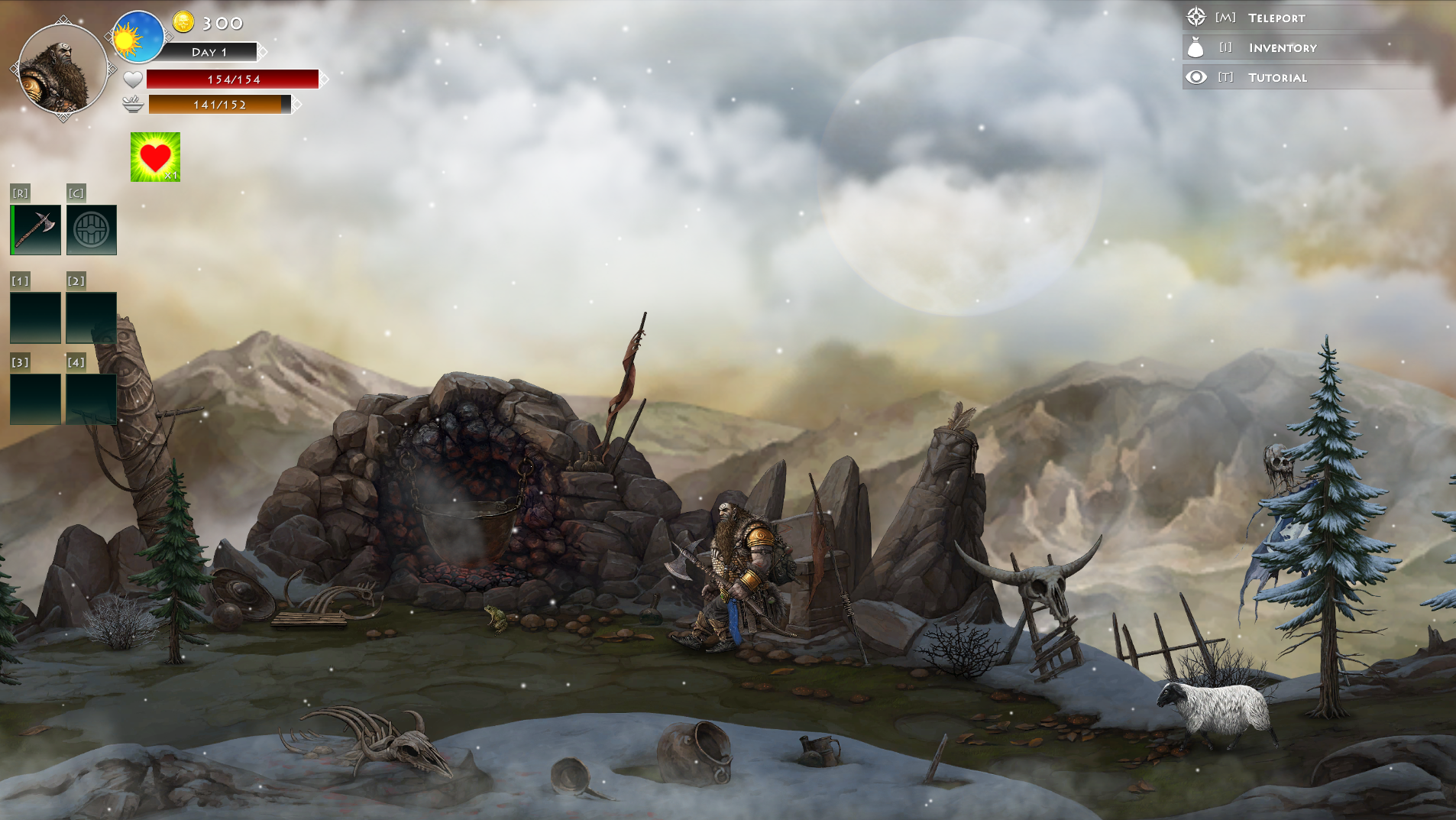 Combat is, sadly, rather clunky and consists of mostly holding down the attack button to auto attack the nearest enemy and a parry function when using a shield that we didn't find especially useful. Between WASD for movement and a lot of other keys and options all over the keyboard, having the single "attack" key being right next to the movement keys can also be confusing. The first couple fights I had to remind myself that clicking on the enemy wasn't the right option, and neither were 3 other keys that I intuitively thought would work; it's actually the F key. Normally I would just remap the keys, but there's so much already mapped that swapping them all around ended up being more confusing in the long run. 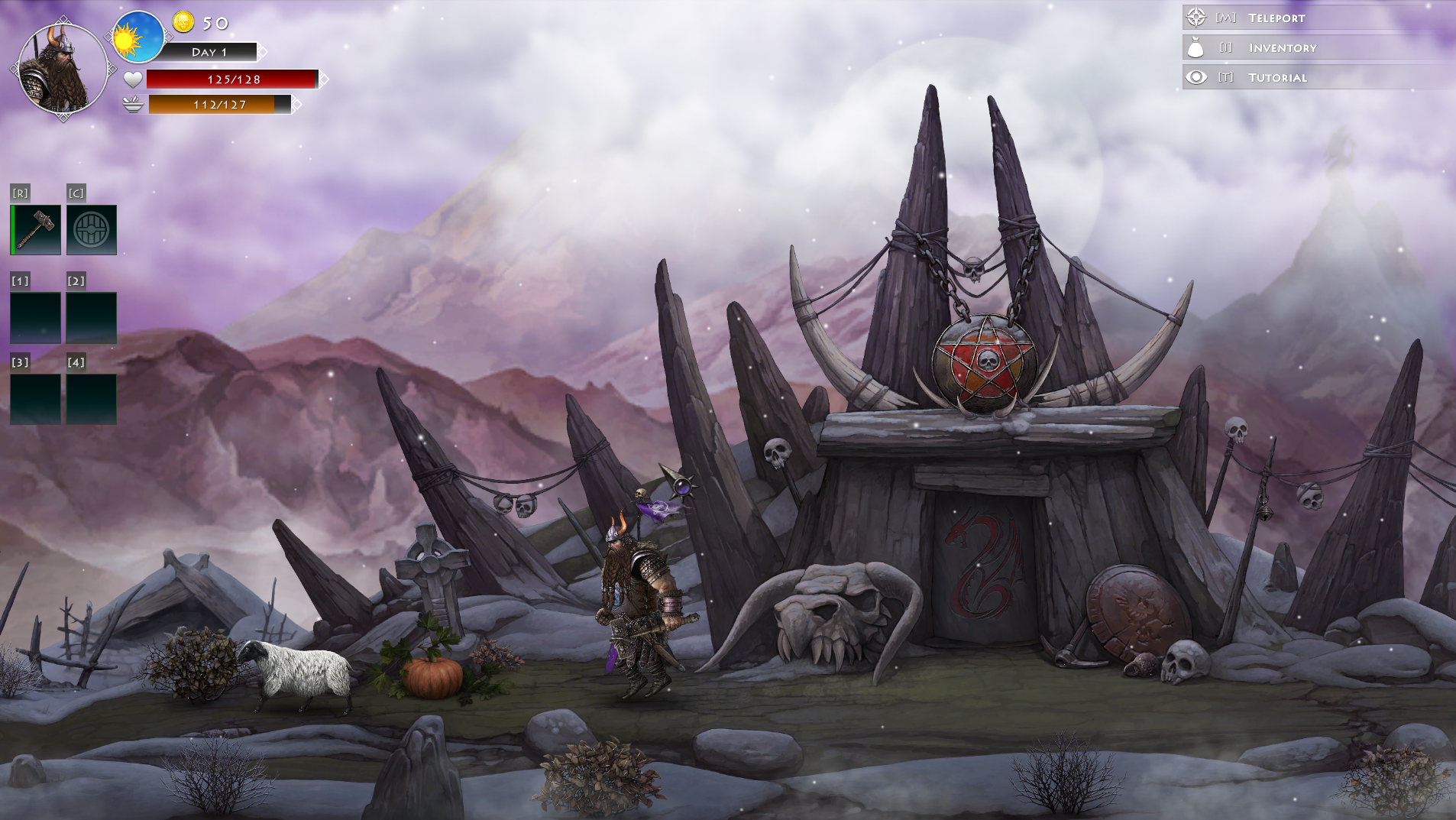 The game has a multiplayer aspect, where you can play co-op and fight together with friends working towards a common goal, but you would definitely all have to put in some solo time first to figure things out, or it would be a lot of running around with no one really knowing how they should operate, like cogs that don't know what machine they are supposed to be running. That said, what little we played was fun and seemed to function well. 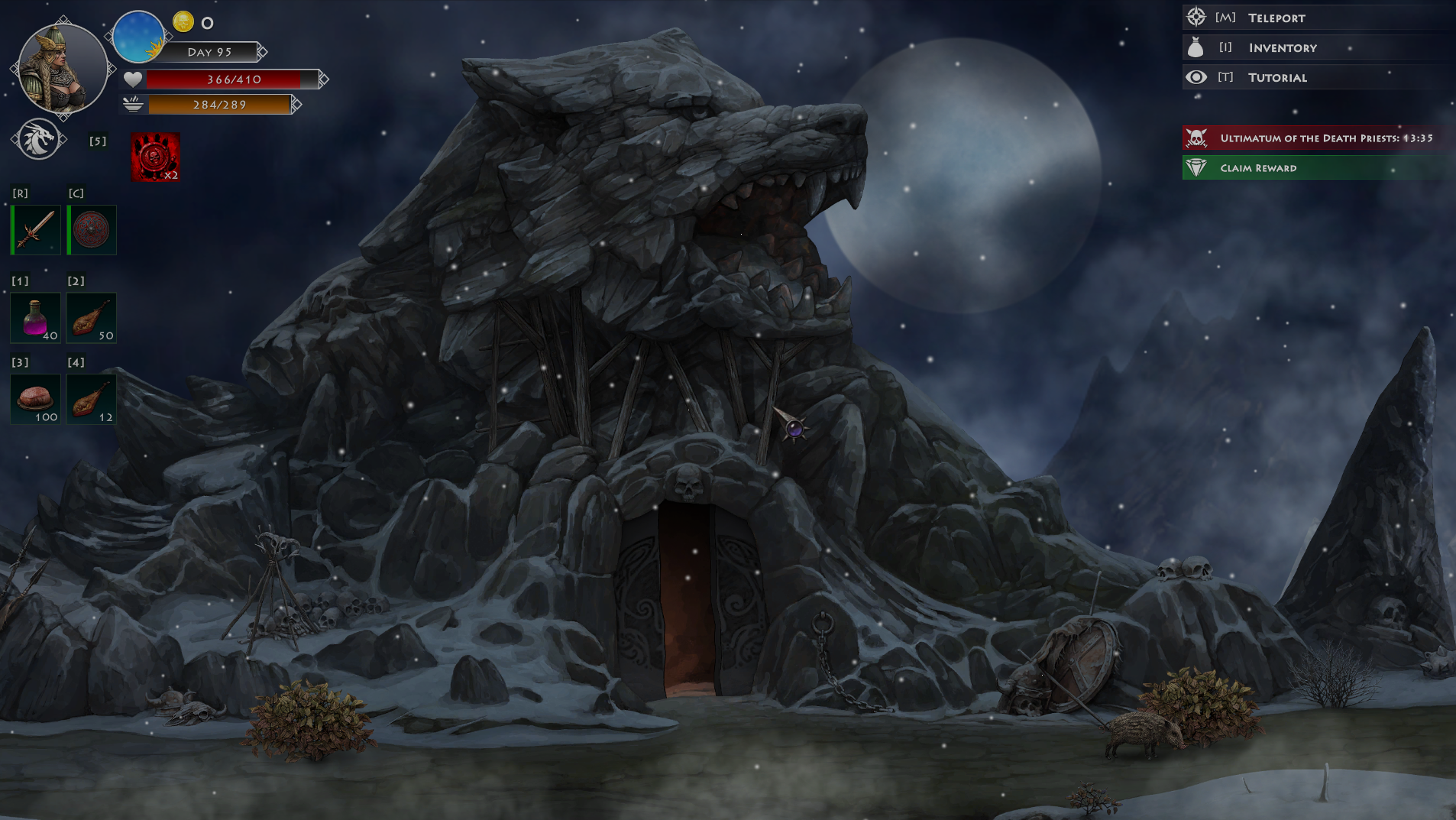 Niffelheim boasts a beautiful, 2D art style that grasps the essence of the cold regions and the atmosphere of the world you are in. Little details abound, from sheep's wool to hulking statues of warriors or wolves. The music is also top notch, with some of the best BGM and voice acting I've seen in smaller titles. I could easily listen to this music on it's own, and honestly would buy the soundtrack just to support the creators. It's that good.

Niffelheim is an exercise in ambition. The game looks and sounds amazing and there is a lot to enjoy in the gameplay. This is not a game for casual players, however and it will take a lot of patience, deaths, reading and trial and error before you have a proper grasp on what you are doing. Niffelheim is harsh and brutal, but if you can survive the low points of the game, it makes the high points that much sweeter.


Niffelheim Review
Pros and Cons
Graphics and amazing sound/voice over work
Tons to craft and explore
Atmosphere is great
Sound and graphics are fantastic
Repetitive elements
Clumsy, uninspired combat
Tutorial is both too much info and not enough