Prior to Farming Simulator 19, the deepest I've gone into farming has been Stardew Valley. This is not Stardew Valley. In Farming Simulator 19 you are, of course, a farmer, but what kind of farmer you are and how you go about it is entirely up to you. The game sets you free in a sandbox city of your choice, either the American farming community of Ravenport or the unmistakably but non-specifically European Felsbrunn. From there, it's all up to you.

This is the most realistic manual labor game I've ever experienced, and that's both a blessing and a curse. Either way, this game wears that badge proudly. Do you want to focus on crops? There's more than a dozen, all requiring different tools to prep and harvest. Prefer to work with wood? There are several different trees and logging machines to play with. What about animals? Pigs, sheep, chickens, cows, and even rideable horses are options. And if you really want to mix and match, you're totally free to do so.

As far as crops go, you can raise your own and sell them or take contracts from other farms to earn extra cash helping out with theirs. But the process of raising those crops is involved, to say the least. You'll need to have a suitable field. Then plow that field. Then sow. Then fertilize. Then weed. And finally, harvest. Thankfully the crops grow within just a few in-game days, but that doesn't mean the game doesn't involve it's fair share of waiting. In fact, waiting is probably the thing you'll be doing the most.

I described this game to a friend as a very well produced idle game. You know those flash games you open in a second window that more or less play themselves while you just check in on them occasionally? Farming Simulator 19 is that, but with an insane amount of detail. Unless you really love the generic radio stations and enjoy picking out all the details in the harvester's interior, you'll likely need to have Netflix up while you're farming away.

AI helpers are available for any task that requires a machine to be driven from one end of the field to the other, which means you can get a few extra tractors or pickers going, but you'll still be there for hours. I don't mean in-game hours. I mean real hours. Whether you hire AI helpers or take the controls yourself, the machines all work at realistic speeds and fill up at realistic intervals, requiring you to drive a trailer over and collect regularly. Then drive said trailer full of crops across the map to dump it at a predetermined location at realistic speeds.

This is a maddening routine of repeating tedium. For players more accustomed to Grand Theft Auto, this might be a thorn in your side as you'll be forced to haul huge loads of trees or beets or fertilizer across the map at a thrilling 10 mph. And don't get any funny ideas about tearing off like Niko Bellic escaping Liberty City's finest. Your massive truck hauling tons of machinery will pinball off that tiny Prius coming down the road and leave you stuck in a ditch, potentially losing all your cargo.

The worst part for me, though, was the lack of instruction. I finished all the tutorials, but there are so many little things the game never bothers to teach you. After a week of playing, I never fully learned how to properly fill sprayers, forcing me to have AI helpers do the job. I had to reference online guides constantly to figure out the simplest things (and fortunately for my ego, many others did as well.) The in-game guide was virtually useless, leaving me to find unique, if inelegant, solutions to what should have been simple problems.

The actual graphics and music in the game are nothing special. The radio plays a slew of country, rock, and electronica from artists I've never heard of. The music is nothing special, and I generally muted it and played my own music.

What I will commend, however, is the attention to detail. The machinery, both inside and out, contains a crazy amount of detail, both visual and aural. Every vehicle looks and sounds authentic, and they lovingly recreated the interiors of dozens of real-life vehicles. If you are into... well, farming equipment, you are going to love all he little touches here.

Scoring this game is difficult. When I try to judge whether a game is "good" or not, it usually comes down to "is it fun?" Farming Simulator 19 is probably the most authentic game I've ever played, teaching me a lot about the process of planting and harvesting. But was it fun? For me, the answer is not really.

Don't get me wrong. It's addictive, causing me to lose literal hours as I tried to complete just one more field. But addictive isn't the same thing as fun. If you love games for their attention to detail and their authenticity, this game is for you. But for me, any game that I can play while watching a marathon of Deep Space Nine just isn't that fun.

This game is best game on this world.

Ok .I don t want to get the key just by asking for it .I am here for suporting the site. 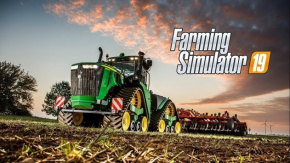