Battle Princess Madelyn is a clear homage to Ghouls and Ghosts, from enemies to gameplay and style; even Madelyn’s attack animations are almost exactly the same as Arthur’s classic overhand toss. You run through the levels in one of two available modes, the straight-forward Arcade or the story-driven Story mode (obviously), picking up magic, weapons and new abilities, all with the assistance of your lovable, deceased dog Fritz, who revives you when you fall.

The game begins with a kindly grandfather telling his granddaughter a bedtime story about a warrior princess who conveniently has the same name as Madelyn. She (presumably) drifts off and enters the world of Battle Princess Madelyn (or perhaps it’s just her imagining the story being read to her) and begins an adventure, with her grandfather actually showing up in the story with her as an NPC early on. From there, the story moves in a predictable fashion, with a kingdom that needs saving and a great evil trying to take over the lands. While the story is nothing new, it’s nostalgic, which is clearly what BPM is going for. It’s pretty pitch-perfect in that nostalgic way, from the enemies to the story, music, SFX, controls and combat; Casual Bit games knows what it wants to do and executes it beautifully.

Unfortunately, sometimes the game sacrifices a bit of fun for the sake of “old school gaming”. There’s no map in BPM, which ends up being extremely frustrating, especially for this gamer, who becomes increasingly irritated when wandering aimlessly. This isn’t just a case of crying because I want more hand-holding; it’s often a complete lack of direction. After an early patch, things became a bit more clear, but even then, NPC’s will give “hints” that you can’t do anything with, or are more confusing than clarifying.

For example, there are various types of currency (shards, coins, etc.), but there is no clear way to know what they do, who wants them, or how to spend them. I was excited to find a shop, but apparently, I either didn’t have enough money to buy what he had, he wasn’t open for business, or I needed to do something to make him sell me his wares. It’s frustrating, since it doesn’t invoke that feeling of, “Oh, I can’t wait to come back here when I find/gather X.” It’s more of an, “Ok… so….?” type of feeling that was more of an irritation than an exciting quest or gear to look forward to.

Additionally, the lack of a map, while definitely “old school”, does not really lend itself to “old school fun”. While the Arcade mode is much more straightforward, the Story Mode is half rewarding and half annoying. There tends to be a lot of backtracking, a lot of “keep an eye out for this” sidequests with no real idea of where to start looking, and a lot of jumping into chasms and dying because you won't know if your jump will lead to a new area or death.

I don’t want to paint the game as all frustration, however. The combat is a lot of fun and the enemy design is pure 16 bit love. Bosses are hard in a fun way, where you know there is a way to take them down, if you could just figure out how. The bosses are often lumbering terrors with great design, and learning their weaknesses is a fun, trial and error challenge. The controls in the game are perfect, and once you find a way to unlock the double jump (made easier after the patch), you’ll be effortlessly guiding Madelyn through the world, hurling axes and spears at anything that looks at you sideways. Weapons, armor and magic are a blast to mix and match, especially after you figure out how to upgrade them and enable the blacksmith via a side quest.

Enemies and boss design clearly had a lot of care put into them, and there is a ton to do. The world is surprisingly large, with a good amount of NPCs to interact with. There are a ton of secret areas to uncover, plus lots of things to collect and even some Easter eggs to discover. The Arcade mode parcels out the game’s content better, and if you could only play one mode, I’d recommend Arcade, although there is a cute tale to be told in the story mode, albeit with more frustration.

It’s hard to heap enough praise on the graphics and sound; this is a delicious buffet for lovers of the time period and style. The old-school graphics are beautiful in a pixelated way, with everything looking picture perfect, from graveyards to swamps and dungeons, everything looks just how you want it to. The sound is equally great, with all old school sound effects that you would expect from a game aiming to nail this time period.

Battle Princess Madelyn is a well-executed throwback with some unfortunate hiccups. The combat is well designed, as are the pick-ups, enemies and bosses, although the level design tends to suffer from a lack of direction and confusing layout. If you are looking for an old-school 16 bit game in the vein of Ghouls and Ghosts, you can't do much better than Battle Princess Madelyn, just be prepared for some frustrating aspects, especially in the story mode. 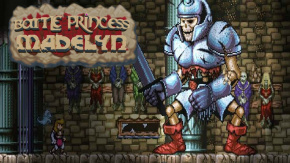