Available On: PS4, Xbox One; Steam

In Overcooked 2, you and (hopefully) some friends will be returning to the kitchen, trying to get food made and delivered on time. You'll need to grab your ingredients and coordinate myriad duties, like chopping, blending, mixing, plating, steaming, baking, cooking, washing dishes and actually delivering the plates of food. Things get extremely hectic, since dishes need to be delivered in a particular order displayed on the ticket in front of you, and once you run out of time, the finished (or unfinished) dish is basically useless, unless you get lucky and the same order is coming up again. Points are awarded for making and delivering food on time, and lost for doing the opposite. Burning food is a major setback, and there's always the risk of catching something on fire, requiring the use of a fire extinguisher to stop the blaze. Coordination, communication and a good attitude is key. Also important is your ability to use a fire extinguisher.

The original Overcooked was a fast-paced blast, and we loved it. The plot in the sequel possesses the same type of quirky humor, with a fun but almost unnecessary story; the game could easily stand on its own with no story at all, so it's a testament to the team that the story is not only there, but also a lot of fun, with the onion king tasking you to cook dishes in order to stop a zombie bread invasion. As you might expect, a lot of food puns and ridiculousness ensues.

Overcooked 2 has the same basic gameplay that made Overcooked of the best couch co-ops around, but the new twists and tricks they bring to the sequel keep the formula fresh, and serve to ramp up the excitement, speed, insanity and difficulty. Get ready to burn a lot of food, and catch yourself on fire at least a few times. And the kitchen. And maybe your fellow chefs. Extinguishers are your friends in Overcooked 2.

Everything is tougher, bigger, faster and more complex in the sequel, from the new recipes and methods of making dishes, to the larger and more complicated kitchens that contain a ton of moving parts. Luckily, the chefs have some new abilities to match the ramped-up difficulty, and chief among them is the ability to throw ingredients, which really changes how the game is played. More than just a gimmick, throwing food is invaluable to your culinary success. There are limits to what you can throw, as only raw ingredients can be tossed around, but they can be chopped or unchopped, and you can toss food directly into a fryer, onto a cutting board, or just into your fellow chef's hands, provided you have the skill to do so.

Although there are only about 9 dishes in the game, there is a lot of variety to them, like a burger with cheese vs a burger with tomato, vs a straight-up, plain old hamburger. Although it sounds simple, in the heat of the moment, it most definitely is not. It's very easy to accidentally toss a slice of cheese onto a plain hamburger, ruining the order and making you start from scratch, as your partner screams at your incompetence. Speaking of interacting with your partners, you might want to play Overcooked 2 after the kids are in bed due to the language you'll most likely be using; then again, you might want to wait until the kids are gone altogether due to the language you'll most likely end up using. This is the type of game where you are screaming obscenities at your friend, albeit with a smile on your face.

Overcooked 2 brings more complicated dishes to the table, including burritos, sushi, burgers, chicken tenders and fries (my partner yelling, "I got the clucks, where dem friiiiies at??!!" will be stuck in my head for a while) and all offer different challenges, since this time around you'll need to mix ingredients using mixers and place food into the new steamers to add to the cooking maelstrom. The levels are similarly amped up, with gale force winds, lava floors, conveyor belts, teleporters, sliding counters (which can cut you off from ingredients/burners if you aren't careful) and more.

One gripe is the difficulty level. It starts pretty high and then continues to ramp up, making things pretty tough for the uninitiated. There are also some occasional depth-perception issues when it comes to some of the kitchens, and more than a few times I went to pick something up, especially in corners, hammering on the button, only to realize I needed to scoot over juuuuuuust a little to grab it. It wasn't enough to ruin my order, but when seconds count, when it happens, it can be frustrating. Also, four player co-op is often not as fun as it sounds, since there are often just too many chefs running around to efficiently run and move in a kitchen.

Everything here is similar to the first game, and again, it works very well. The cutesy chefs clash comically with the almost-frustrating gameplay, as the temperature in the kitchen (and your living room) rises, and the sound effects are great at ramping up the tension, as the music begins to speed up while you boost around the kitchen, listening to the alarm bells that you know are about to morph into whooshing, crackling flames.

Overcooked 2 is a fast paced exercise in culinary insanity. It demands true, pure co-op unlike many games out on the market right now. Although online play suffers from not having your partner in the room, the option to play online is still a welcome one. The difficulty is much steeper this time around, and frustration can abound towards the end of the game, but overall, this is a couch co-op experience you shouldn't miss.

Overcooked 2 Review
Pros and Cons
Fast paced, fun gameplay
Great new additions, from cooking methods to dishes
New levels open up tons of new challenges
Sometimes difficult to tell what you are grabbing
4 chefs can be "too many cooks in the kitchen
Solo play is improved but still is an inferior experience
Some repetition in later levels 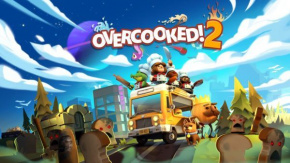