It that's time of year when spooky and scary games are on the menu, but if you're not in the mood for some survival horror or jump scares, perhaps Damsel can give you something to sink your teeth into.

You play as a the titular vampire hunter, Damsel, working for a government agency monitoring the activities of the undead hordes. These corporate undead, called "The Red Mist" are marketing and distributing their popular vampire drink, which is infused with human blood, and you need to stop them from doing it. The story is laid out in vibrant, comic-book style panels detailing Damsel and her support team, but only hints of what's going on are given as you progress. The more you play, the more the world unfurls, which sounds obvious, but Damsel really nails the pacing, mixing just enough info with the frenetic action to keep pulling you forward.

The basics of each level is simple: you're dropped in and given a goal to accomplish, and there are all types of goals, mixing things up for a good amount of variety. You might have to rescue all the hostages or perhaps eliminate all the vampires, or maybe just all the coffins. Perhaps you'll need to hack servers or disarm a bunch of timed bombs. The gameplay itself doesn't vary too much from level to level, but there's always a ton on your plate, for better or for worse.

This is where the difficulty really kicks in. Damsel doesn't level up or gain new abilities; what you have is what you have. As the game philosophers of our time might say, you must "git gud", and do the best with the moveset that you have. On top of that, while there's only one way to win any given level, there are always tons of ways to lose. Accidentally shoot a hostage? Lose. Time bomb goes off? Lose. And these are in levels where the goal isn't to save hostages or disarm bombs. You have to carefully plan every shot to make sure a stray bullet doesn't knock off a hostage, or make sure you're in the clear before you get too close to a bomb and activate the timer. Planning, memorization, and reflexes are key to your progression.

This game likes to slowly creep the difficulty up. Level by level, another type of vampire, another level obstacle, or a new challenge goal is introduced. Slowly but surely, you find yourself getting better, but also thinking "When the hell did this get so hard?" And yet, despite the difficulty, I can't help but keep going back for just one more run. I know that this time I can avoid that stupid spiked ceiling!

The one nitpick I have with this game are the controls. WASD, space bar, and mouse. All of them. It's incredibly awkward to get your hands to do what you want when most games that use WASD don't also jump with space, or shoot and dash with the mouse. Let me clarify, not aim with the mouse, just shoot. You still have to use WASD to turn the right way. You can get used to it, but it's such a pain, and I wasn't able to get a Steam controller to work with it, so I just had to deal, which was frustrating.

The music is intense, which is great for a game that just doesn't let up. There's always a brute or a bone-thrower waiting just off screen and the music keeps the intensity up. That said, it'd be nice if there was a bit more variety. I can only remember a single song that repeats throughout the entire game.

As for graphics, it's nothing system crushing, but certainly good for the genre. The main character looks awesome, the stages, while a little same-y, are nicely detailed. I love the advertisements for blood cola and the comic panels are a great aesthetic, even if they do make you click panel through every panel, even when several panels are visible at once.

If you want something with a little bite, Damsel certainly has you covered. The intensity never seems to stop, the action is fast-paced, and when you beat a level, you feel a huge amount of satisfaction. The story is intriguing, the main character is dynamic, cheeky and the game is very fun to both watch and play. If you like your platformers with a solid challenge, Damsel is your best bet for a bloody good time.

Damsel Review
Pros and Cons
Fun levels with lots of action
High challenge that makes you think before you shoot
Intriguing story that unfolds naturally
The control layout is awkward and hard to get used to
Lots of ways to lose on any given level, sometimes too many
The levels don't really change 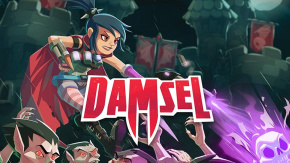