Rage in Peace is, to the surprise of no one, a rage-inducing game. The point is very simple; you try to get from one point of the map to the other and not die. But, honestly, you are going to die a LOT. To the point that there is a book in the game that will catalog all the ways you can die. Sprinkled between the deadly hazards are checkpoints that will save your progress and allow you to continue from that point. You will have to memorize where things are and sometimes the game feels kind of like a really upgraded version of Simon, but in a good way. At the end, you'll jump, run, die and memorize. That's R.I.P. in a nutshell.

This is the story of the day Timmy died. A marshmallow man with all the vim and vigor of a potted plant, Timmy is visited by death one day and is told that he will die, and quite soon. To the Reaper's surprise, Timmy has but one wish: to die at home in his pajamas. The reaper says as long as Timmy can make it to his pajamas before the day is up, he can still achieve his dream. And with that, Timmy runs off...

You make your way through the levels, getting murdered over, and over, and over. I'm talking like Dark Souls amounts of death. Everything in the game wants to kill you, from light fixtures to falling glass, swinging spiked balls that take your head off and myriad other tools of death, destruction and dismemberment. There is a "Goldfish" mode, that will open up more checkpoints, but even with that mode enabled, it's still an uphill climb to get through the game and uncover the story.

And there is a story and it's a good one, but going into much more detail than that will ultimately spoil the game, so you'll have to go out and play it for yourself to see where it goes. However, (without giving too much away) it's because of its story that the gameplay doesn't quite feel like it necessary gels with everything else. Don't get me wrong, the mechanics are solid, and it is a fine addition to the genre, with a good story. But the story just doesn't feel like it belongs to this game. Applied to almost any other game setting/genre, the story would be even more impactful, but since this is a rage game, I didn't feel much for the overall story other than mild disappointment that this tale was housed in this title.

I don't want to lean to heavily on the criticism here, because as I mentioned, this is a fine game, and my opinion is exactly that; my opinion, and someone else could play this game and get a totally different feel. But me personally, I don't think the gameplay and story gels together as much as they devs wanted it to.

There are several things about this game that really shine. First and foremost is the art style and world building. The levels, characters, and hazards look very interesting and unique. Everything has a very detailed style about it and it makes the world seem very alive, even though it is trying to kill you in dozens of ways.

Next to the visuals we have the music. This game has an amazing score that is worth listening to on its own. I literally would buy this soundtrack as an album if I could find it.

Rage in Peace is a good idea with arguably the wrong story. The way the gameplay and story mesh (or rather, how they don't) made me care less for Timmy. That being said, the gameplay is fun, the art is great and the music is phenomenal. If you like these types of games, this is a great entry in the genre. 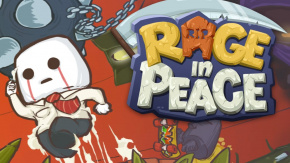