From the number one best tuner magazine: Super Street, comes Super Street: The Game. Published by Lion Castle Entertainment and jointly developed by Team6 Game Studios and Rebel Games, this racing title was released on September 11, 2018 for all next gen platforms. Aiming to provide an accurate but creatively free experience, the development teams chose to partner with hundreds of aftermarket groups in order to get the most realistic external modifications and body kits out there. Featuring a diverse group of iconic cars for you to choose from, the game puts you on the path of fixing up an old junkyard car into a street racing beast.

The premise of Super Street: The Game is that you are an aspiring street racer looking to make a name for yourself. You'll pick yourself up a derelict junkyard jalopy, and slowly invest your time and money as you turn it into your dream car, slowly rising in rank to become an iconic racer. Along the way, individuals will choose to join your crew, supposedly offering stat boosts and various upgrades for your car.

It took awhile to fully understand the complexity of the game, beginning with your beat up and rusty car with atrocious handling and braking. As you progress and purchase performance upgrades that range from engine parts to tire rims, the performance of your car will steadily increase. While this may make it difficult for beginners learning how the driving mechanics of Super Street: The Game works, it offers a different level of immersion and helps players appreciate the time invested into their dream car. Despite this, even with higher end cars being loaned on specific races, the overall handling still felt terrible. Race courses are often filled with sharp turns, placing heavy emphasis on drifting, a mechanic that would supposedly make maneuvering through such obstacles easier. However, there was next to no instruction on how to effectively drift, only that “mastering the handbrake will make tight corners an ease”. Getting your car to top speed is risky, as the same sharp turns might result in a crash and respawn, setting you far back behind the aggressive AI cars. There are a plethora of visual upgrades licensed by aftermarket groups, which are great for enthusiasts, but not practical in the game’s purpose of increasing your car’s stats. As players are more tempted to get visual upgrades before performance upgrades, the end result is an excessive amount of grinding to purchase the right performance upgrade in order to pass each campaign race.

Super Street: The Game uses the Unreal Engine to give life to realistic cars and environments. Taking damage has never looked so intense, as inexperienced drivers will soon find their car looking like a lump of scrap metal that went through a trash compactor. Even with impressive visuals, the game tends to suffer from textures “popping in” as a result of poor rendering. The same would go for sounds, crashing into the other cars results in a weird muffled noise rather than what you would expect from a collision. The background music is overly loud, drowning out nearly all of the noise generated by your own car unless adjusted appropriately.

Super Street: The Game, while it has its charms, feels like a work in progress. As there is great attention to detail in terms of customization, perhaps even rivaling that of the Need For Speed titles, there is not enough dedication to the core of any racing game: the racing. Handling of cars both stock and upgraded feel somewhat different, but still feel sluggish and stiff overall. I would have never expect to have feared going fast... in a game built around cars going fast. To its benefit, I did greatly enjoy the pseudo story of building up my lovable junk car into something more presentable. However, the missions in the campaign mode mostly reused the same track with minor changes, and the game modes quickly grew repetitive by the second chapter of the story. All in all, Super Street: The Game, still needs some love and elbow grease, but shows promise as a developing project. 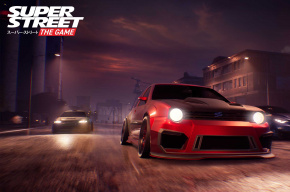