Into The Breach Review

Save the past and protect the future. Strap in to your Mech, and Into the Breach.

Into the Breach is a combination of Isometric Tactics, Roguelikes, and Mech Warrior customization. You start out controlling a single time traveler with a basic skill, and as you play the game you'll eventually unlock others. The three mechs you begin with in your squad will break you into the mech-world, and as you play the game and complete certain objectives, you'll earn coins that you can use to buy different mechs with different abilities. Achievements you complete to earn coins range from Squad-specific missions to the gameplay overall.

The remnants of humanity are being threatened by the Vek, an underground dwelling monster-beast that breaks free from the earth and starts attacking everything in sight. The present seems good and screwed, so you'll step into your mech, enter the rift to the past, and try to prevent mankind's total destruction.

Once you begin a run, you are locked into controlling your selected mechs, and over time you can power them up through the use of Power Cores. These can be earned through missions, or by buying them in between levels. You also can earn or buy weapons and mech modifications throughout the game as well. There's also the Time Capsule, a lone escape pod that can appear randomly in missions, and you must secure it before the Vek get to it or it is otherwise destroyed.

The combat is challenging but solid; there never seems to be an unfair advantage for the opposition that can't be taken care of with the right amount of planning and strategy. The levels in the game consist of Islands that then send you out on segmented missions for various rewards. Within these levels are power stations that give energy to the defense grid, which serves as your lifeline. If the Vek destroy a building, it will lower the power on the grid overall. Once the grid hits 0%, it's game over. And to make things even more difficult, the missions aren't focused on destroying all of the enemies, rather they focus on surviving waves of enemies before they retreat.

One interesting mechanic is the ability to take back a turn in combat. If you made a tactical error, or need to have a building or mech survive a situation, you can take back the turn and start over, although you may only do so once per battle. This gives you a hair's edge over an enemy at times, although there were also plenty of times where taking back a move eventually just ending up with me getting killed anyways. The game is tactical as hell, and you'll need to study your opponents, their moves, and their order of operations before doing anything, lest you make the wrong move and cost yourself a unit.

Into the Breach is an isometric pixel game involving Aliens, Mechs, and the glorious war between them, and the 16 Bit style complements the feel of the game well. Oddly, the game is surprisingly colorful, in a post apocalyptic way, and everything in the game is uniform, from the maps and aliens to the mechs and the terrain itself. And while it does hold true to the gritty war-like color pallet you would expect of a game like this, it does an amazing job of making things stand out and look unique.

The music is atmospheric and well composed, and definitely not what I would expect for a game like this, considering the subject matter. Still, it subverts expectations in a good way, and invokes just the right feeling and atmosphere of Sci-Fi and survival that is hard to put into words, but realized beautifully on screen.

Into the Breach has dozens of little mechanics waiting for you, and it would take an essay to describe how they all tie together and make an amazing game. As someone who was a huge fan of Advanced Wars and Final Fantasy Tactics, I loved this game. When you factor in the low price tag, Into The Breach is a no-brainer for any fan of the genre. 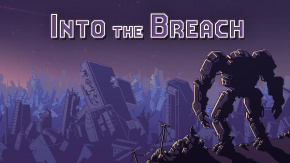