Guns, Gore & Cannoli 2 is the sequel to the 2015, 2D side-scrolling shooter from Crazy Monkey Studios. We liked the first title (you can check out our review here) and overall it was a lot of fun (despite finding a few problems with it), in a Metal-Slug kind of way. You guide Vinnie through each level, double jumping and rolling to avoid damage, while picking up guns, ammo and health-restoring cannoli, attempting to solve the mystery of who is trying to have you whacked. You make your way through cities, sewers, all the way to war-torn Europe, fighting soldiers, monsters, zombies and giant sewer rats, shooting at everything that moves, jumps or lurches your way.

Guns, Gore & Cannoli 2 places Vinnie Cannoli in the 1940’s, a decade and a half after the events of the first game, which ended with everyone in Thugtown being killed. Now, Europe is being torn apart by the war, the USA is preparing for battle and the mob just keeps doing mob stuff. We first see Vinnie tied to a chair, ready for a beatdown, before the story flashes back to when Vinnie first realized he was being followed by a mysterious figure known as the "Dark Don". The further he delves into the mystery, the worse things look, and before you know it, friends become foes, and a dark secret crawls out of the past. A secret that must be riddled with bullets.

The story on the whole is fine, but once again, I was a bit disappointed by the lack of humor. After reviewing this on PC a few months back, the lack of humor hit me all the harder this time around; it just seems like such a wasted opportunity to not have more jokes, or comical situations. Many times, the writing was just... there. Mob cliches abound, but there isn't much of an effort to flip any of the tropes around, or do anything with the already-funny setup. As I mentioned in my previous review, for a game that mixes Nazis, zombies and the mob, I really expected more from the writing.

Using the PS4 controller was an improvement over the mouse, except for one glaring issue, which I will get to in a second. As I mentioned in the PC review, the new 360 degree aiming system makes a big improvement over the first game, especially the ability to pull off headshots. Aiming with pinpoint accuracy goes a long way towards livening up the action and making you more effective in battle, and the joysticks work perfectly to that end.  You can also double jump now (in addition to your roll/dodge), which makes traversing the environment a much smoother experience. However, the inability to map buttons was almost a dealbreaker for me.

The way the buttons are laid out is a mess, and switching weapons mid-battle is such a chore that I often just used whatever was in my hands at the time, instead of switching to a weapon better suited to the situation. I can't begin to count the amount of times that I tried to switch weapons mid-battle, only to end up with a rocket launcher or some other weapon I didn't intend to use in my hands, which resulted in either blowing myself up, or firing a single .45 at a boss, when I meant to get my belt-fed machine gun out. It really affected my playthrough, and my PC-gamer pal who was playing it with me almost rage-quit multiple times. It's such a small thing, but it had such a big impact on my experience that I had to deduct points for it.

Another issue is the camera. When playing with friends, the camera is zoomed out so far that it affects gameplay. My friend and I both scooted our chairs right up close to the TV, which made it better, but again, having an option for the amount of zoom would have been great. Many times during boss battles, one of us would die, and then end up waiting a while to jump back in, since the game zooms in properly to display the action with only one player on screen, making everything easier and less chaotic. Many times I would point to the borders of the screen and say, "Why do we need to see all this (gestures to outside of the action, like the outside of the building we are fighting in), when we really need to see this (pointing at actual area the fight is taking place)?" It was frustrating to say the least, especially since there is a great level of detail in almost every area you blast your way through that is missed with the extreme zoom.

The levels themselves have definitely been given an upgrade in terms of scope, with larger locations, more hidden rooms, and some big set pieces, like a wide open theater, or when you're storming the beaches of Normandy, dodging bullets and mortar fire as you jump from one fox hole to the next. Like the first game, there aren't a ton of secrets to find, but it's always fun to blast through a door and find some precious heavy weapon ammo concealed inside. The weapons (or lack thereof) are a little disappointing, although there are some nice heavy caliber additions, like the new belt-fed machine gun. For the most part, it's more of the same though; sure, you get a heavier "light" SMG, and a new (heavier) pistol, but overall, like the story, I would wish Crazy Monkey would have found something more over-the-top for this go-around.

Enemies are quite similar to the first game as well, although there are a few great additions that make you rethink your run and gun mentality. Large, zoot suit wearing gangsters soak up bullets and charge you like Bald Bull from Punch Out, sending you flying if they connect, and one particular enemy, who looks like a cross between a prisoner and a mummy, is a lot of frustrating fun to fight, as he whips his ball and chain at you, then sails behind it, attacking you from strange angles and locations. There are some fun and creative boss encounters as well, but many of the enemies are the same as the first game, or seem like reskinned adversaries you have already shot your way through before.

The graphics hold up great here, with better animations all around, and the character design and levels are a joy to soak in, despite the aforementioned zooming issues. I am a huge fan of the game's visual aesthetics, and the art-style is perfect. The sound on the whole is excellent, with great background music and weapon sound effects, especially when there is a ton going on in-game.

Overall, Guns, Gore & Cannoli 2 on the PS4 is a great game that is hampered by a few silly issues that really drag down the experience. The inability to map buttons on the controller is a bummer of a missed opportunity that would have seriously improved my time with the game. Coupled with the zoomed out camera and weak writing, Guns, Gore & Cannoli 2 is still a fun co-op experience, but with a few tweaks, it could have really been something great. Still, at the $12.99 price point, it's definitely worth checking out. 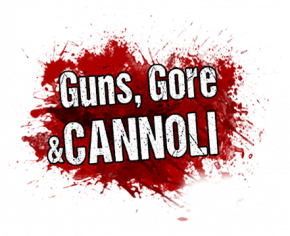 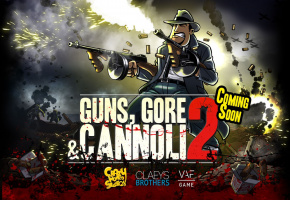