Developed by Streum On Studio, Published by Focus Home Interactive

Available for PC and PS4

You are a Librarian, a ranking member in the Dark Angels 1st Company of Space Marines. Equipped with sacred Terminator power armor, you and your fellow Deathwing are ordered to scour and purge a recently discovered Space Hulk, the deformed mass of countless space vessels colliding together after centuries adrift in the Warp. Within its many husks lie ancient artifacts that are supposedly important to someone, as well as a nigh infinite horde of murderous xenos (or Genestealers) who would very much like to kill you. Move through the area with your team, take out xenos, complete objectives, and bring glory to the empire.

The story of this game is not difficult to follow. Plot events are told to you by a guy during pre-mission briefings and loading screens. Missions have only a minimal amount of information to give you a basic objective to complete, but won't tell you anything very interesting. It will take a long time for substantial story elements to reveal themselves.

In the single player campaign (finding a multiplayer game without already having friends was extremely difficult) you'll be making your way through sequential missions, gradually increasing in scale and enemy types. As a Deathwing, you have a primary ranged weapon and a secondary melee weapon, with a few cool-down-based abilities like electric bolts or shockwave blasts. Weapons have giant clips and infinite ammo, and to compensate, weapons take considerable time to reload, tend to be inaccurate or have limited range, and jam frequently. You have command of other Deathwing units who utilize the same weapons and can perform most of the same actions you can, like opening and securing doors. Each team member has a specific role to play, like a medic or heavy weapons tank to help round out the squad or just to prevent one person from being completely self-sufficient and have no need for teammates. You can also use a Psygate to briefly teleport back to base, resupplying and healing your squad. Location based damage also factors into your status, and it is often not as simple as it should be to gauge how healthy you or your teammates are.

Doors can be opened and closed normally, locked down or unlocked (which takes some time and leaves you vulnerable), or completely destroyed with a melee swing. Some walls can also be taken down to reveal another path or a secret. Turrets are occasionally available to be hacked, giving you control of the powerful guns, but if you don't they'll target you and force you to take them down. Hacking requires use of the tactical interface, which pauses the game, but unpauses again once you start hacking into something. Damage taken while hacking interrupts the process. I never found a really good opportunity to use a turret, and I would just generally destroy them so they didn't kill me if they turned active.

Enemies are a mixture of Genestealer monstrosities and infected humanoids. Most xenos run at you from various angles, swiping with large claws and sharp talons. Some have other special powers, like exploding on death or just being really big and hard to kill. Humanoids will annoyingly shoot at you with incredibly accurate and highly damaging rifles from large distances, forcing you to stop all movement and try to hit them with your wildly inaccurate and strangely weak weapons. There's even dudes with rocket launchers that can remove half your health and outright kill you in an instant.

That is essentially the entire game. You will take your mildly useful squadmates through dark corridors, taking unavoidable hitscan damage from enemy weapons, and sometimes hunkering down to blast waves of xenos. There won't be any twists, and the shooting mechanics are not going to blow your mind.

The graphical clarity is quite impeccable. Lighting and atmosphere set the mood very well. Most weapon and environmental effects are crisp and clean, and models have a startlingly high level of quality. Unfortunately, there are uncommon graphical glitches and animation tomfoolery that not only mar the visual fidelity but cause (virtual) death. It also just barely misses the mark on having you feel like a several ton armored soldier man fitted with artillery cannons, which is half the appeal of the game.

Audio design for everything is great. The worst part about it is that weapons sound more powerful than they are, leading to confusion when enemies appear to shrug off attacks from your giant rocket machine gun. Also, voice acting is generally stiff and lines in battle repeat often.

Space Hulk: Deathwing is an adequate game with adequate gameplay. It lacks depth in its shooting and mission structure, and at this time has essentially no one playing multiplayer, which is too bad. I can only recommend it for those who are extremely into WH40k, and even then I would say that it's been done better. 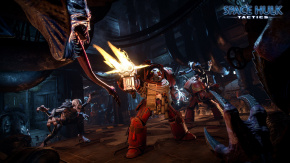 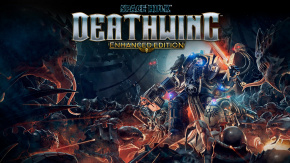