Indie Pogo is a 2D platform brawler with a twist. Your character is always pogo-ing up and down while you fight, and every move you make, every attack and attempt to dodge will be affected by this non stop motion. You have directional attacks that change depending on how long you charge them, and you also have a double jump and an air dodge.

There isn't much of a story to this game. The playable roster is both a collection of characters from various games you'll recognize, like the Shovel Knight, and original characters that are pulled together into a not so typical game. While in a constant state of motion, all of the fights end up being in mid air, dodging around each other and trying to land their strikes. Although it sounds simplistic, the vast amount of unlockable characters and the truly unique play styles specific to each character makes mastering Indie Pogo a truly interesting and fun challenge.

In addition to Arcade mode, where you face off against a list of characters in order to take on the final boss, there are also Challenges, where you have a specific goal to achieve with a certain character or rule governing gameplay in place. As you play through the levels, you'll earn coins which you can spend on GATCHA machines to unlock trophies and other in-game goodies.

A unique feature to Indie Pogo is that instead of a damage meter like you'd find in most games, where the more damage you take the easier it is to knock you out, you instead have steadily decreasing health, where, once you run out, you'll lose a life and respawn. Instead of feeling cheap or gimmicky, this feature surprisingly makes the stakes in survival feel a bit more real, as you don't necessarily have to be tossed off screen to lose a life.

It's not all sunshine and pogos however; one issue I have with this game is in the Arcade mode's difficulty spike. In normal mode and hard mode you'll make your way through the stages and depending on your skill level, you'll probably have a tougher time with some opponents and an easier time with others, like any game. Overall, Indie Pogo feels fair and balanced, which is why the difficulty spike with the final boss feels so brutal, and frankly, pretty unfair. It honestly ruined the final confrontation for me.

For example, while you must continue bouncing all the time, the boss can stop mid bounce, and home in on you with an attack that deals massive damage. Ok, fine, bosses often have gimmicks that make them tough to beat, that's just games. But after that particularly brutal attack, the boss will proceed to chain air combo you off screen until you lose all your health or fly out of bounds. Dodging does no good as he can attack again in mid air, and the process starts all over again. He also has projectiles that bounce around the stage, he can create permanent stage hazards, and he ignores invincibility frames. It doesn't tank the game by any means, but it's a real bummer of a fight, and it left me unsatisfied and frustrated.

Indie Pogo is 2D in style, with a vibrant pixelated style and well-blended color pallet. Sound effects, animations, and the music are all well-crafted and chosen perfectly for the stages, characters, and menus. And the stages are amazing! A variety of atmospheric and clever ideas are blended in with a brilliant art style, which makes visiting each of the stages really feel like their own world.

Indie Pogo is not your typical game. Is it a platformer? It is a stage brawler? Is it insanity? You make the call. I enjoyed it immensely for the most part, except for the final Boss of Arcade mode. If this genre is your bag, and you want something different, give it a try. 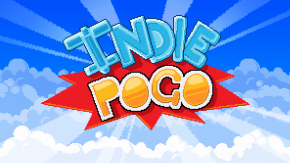