Developed and Published by NVYVE Studios

Available for PC, Xbox One, and Playstation 4

Hypergun is a roguelite FPS focused on weapon mods, with some progression mechanics. You assume the role of Dewey Owens, an intern at DevTech Labs. As an important member of the company, your job is to partake in simulated dungeon sequences, fighting virtual aliens and collecting modifications for your gun. Each mod will, well, modify the behavior of your default weapon. Some are simple, increasing accuracy while decreasing fire rate and the like, but sometimes you'll find, say, a smaller gun that sits on your barrel and shoots additional tiny bullets, leaving you with the difficult choice of choosing between a pie launcher or harpoon cannon to stick on the underside of your espresso machinegun.

There is little to grasp onto in terms of plot. The gist of the situation is that there's an alien invasion going on, and DevTech Labs is trying to design and manufacture the most effective weapons to combat the invaders. This is achieved by sending employees into the simulation, and if they successfully complete it, the Hypergun that was 'constructed' will be selected for real-world development. Wandering through DevTech Labs will reveal some lore by way of posted notes and laptops sitting around, but otherwise, most information is found in the index that details all the monsters and guns you have encountered.

Each new game will start you in the first dungeon with a basic weapon. Additionally, you have a set of skills that are activated with a cooldown, passive buffs, or resource-based. As you enter and clear rooms of enemies, you will find resources like health, shields, bits (currency for the shop), and Hypercoins. Hypercoins are used outside of the simulation to unlock more weapon mods (which are added to the random pool you find in dungeons) and more characters with different stats and skills. Upon dying, the simulation ends and you must start again at the beginning, losing the Hypergun you built. Hypercoins are kept outside of the simulation and not lost.

Most rooms instantly lock once you enter, spawning a few groups of enemies that begin chasing you. Once all the enemies are dead, you can continue exploring. The key to surviving is to run and shoot around the arena, without getting trapped by ambushing aliens or the environment. Hazards and obstacles can catch you in a bad spot if you don't pay attention, and most rooms contain a teleportation point to allow quick transfer through the dungeon. Some combat arenas act as a challenge room with some guaranteed loot but a larger volume of enemies, only starting when the player pushes a button. Besides arenas, there are map rooms that reveal the dungeon, chest rooms that might need a key to open, shops to restock or get new mods, and sometimes just a dead end. It is a shame that you will essentially spend the entire game running in a circle, dodging and shooting waves of enemies or a boss monster; for how fun the game can be, there is just not much variety to be found.

Hypergun can be a visual nightmare. The effects used to simulate virtual reality, while certainly interesting and sometimes very effective, are often distracting and incredibly difficult to look at. Animations are also quite basic and don't always properly convey what an enemy is doing. Regardless, the aesthetics of the character designs and the environment itself are clean enough that it is still navigatable. Unfortunately, I noticed frequent stuttering that persisted no matter what I did with the video settings. The music is gnarly, and both fits with and makes up for the visuals.

The beats are incredibly catchy; I defy you to listen to the soundtrack and not get pumped. In terms of audio effects, there is a large variety just for your gun, depending on what is attached. Some enemies have several distinct cues that alert you to their current status, but others are strangely silent when they should be fairly loud, like missiles. Another gripe is that each dungeon only has a few tracks that awkwardly end and restart, depending on what's happening.

Hypergun is flawed and could do with some significant polishing up in terms of performance, balance, and visual fidelity. However, for what it is I had a good amount of fun. This game at the very least deserves a look for fans of the genre. 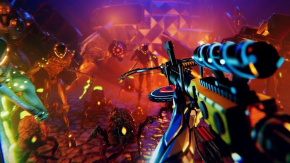