Get ready to hype the crowd and crack some skulls in this fast paced beat-em-up that defies expectations! Welcome to Speed Brawl!

Speed Brawl is a 2D side scrolling beat em up with platforming and RPG elements. The premise of the game is to run fast, smash everything in sight, and look good doing it. All the matches are timed, with bronze, silver and gold medals determining your prize. You are rated at the end of the match, with values taken into account based on the amount of damage you took, how fast you were, and so on. The better your overall speed the bigger your prize.

In the dystopian future past of Victorian London, two up and coming fighters, Ebba and Bia are entering the world of Speed Brawl, a fast paced crossover sport that’s half bar fight and half breakneck speed race to the finish line. You’ll follow them and their growing group of brawlers as they go from nobodies to superstars in the world of Speed Brawl.

The fighting aspect isn’t all that new, but where Speed Brawl goes from typical to fantastic are the alternative rules within each match, as well as the ability to level up your characters as you go along. Not all races are simply about getting to the finish line; some require you to hit all the checkpoints in order within a strict time limit, while others have you wailing on an invulnerable enemy in order to hit a damage threshold within a limited time period. Speed Brawl takes races, brawls and technical stunts and blends them all into a fun setup with a lot of variety within the simple framework.

As far as the actual gameplay, you have the typical move-set you’d expect from a BEU, but with the added bonus of a Y Axis involving lower and higher platforms within a stage for a given fight. This makes air combat tons of fun, as gravity can become more of your plaything than your enemy in some cases. You also have a power move, a charging super move, a dedicated dodge mechanic and counter attack, as well as the ability to tag in your backup character and use combos to deal big damage.

On top of the solo play, the game also features local and online multiplayer, as if this game needed another reason to be a great game to share with friends.

Speed Brawl is gorgeous. A thick almost comic book style of art that looks very heavily inspired by SkullGirls is a perfect fit for the title. The animations for the characters are all beautifully done and none of them feel like they are copying each other. Speed Brawl takes a given mechanic and then tailors the look to each of the characters, and the effort and attention to detail shows. Ebba dashing across the screen looks very different from Bia's dash animation, even though it results in the same result.

The music is a real headbanger for the individual events too, and absolutely gets you pumped for the match to come. When repeating some levels it can seem a bit repetitive, but it's still well done. The voice acting in this game as well as the script is brilliantly done as well, and pretty much everything about the audio shines. Bravo to the voice director and the actors.

Speed Brawl flew under my radar initially, and I am so glad I was given the chance to take it for a ride. Between the absolutely jaw dropping intro sequence, the beautiful art style and the on-point voice acting, this game is awesome. With that in mind, I give Speed Brawl a Ring Side Seat out of 10, and my personal recommendation. Get this game, turn up the volume and have fun. 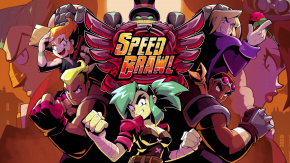