Traverse the 2D worlds of good and evil with flask in hand, and destroy the master of evil in A Hole New World!

Long ago the Goddess separated the world into a good half and a bad half. The bad half was then taken over by a dark evil lord (who could have seen that coming?). Meanwhile, in the good world, monsters started to break through the space between worlds and the only person who can stop them is... The Potion Master (you)!

A Hole New World is a 2D platformer at its core, with the gimmick being that there are no death pits; jumping into a hole will only take you to an upside down world of similar design and hazards, albeit with a different color pallet. This feature is played up a lot in terms of the game's difficulty, as you will spend the majority of some stages upside down, sometimes having to tackle boss fights in this mirrored setting, which can get pretty difficult.

The weapons in the game are potions, and every time you beat a boss you'll receive a new one, but there is a bit of disconnect in terms of pacing and use. For example, the first two potions you get are what you would expect, a tossable vial with an effect on impact. However, after the 3rd boss you get the blood potion, which allows you to throw sonic booms, gives you bat wings so you can double jump, and allows you to perform a power slide attack. It feels kind of like a case of "feast or famine" and this disconnect really sticks out the more you play and the more potions you get, with each boss having a "use the previous potion to win" Mega-Man-esque motif.

Another issue that bothered me were the enemy invincibility frames. When you're hit, you're thrown backwards and you blink for a few moments. This allows you to get back in position, or get away from danger. However the enemies will merely blink and keep on attacking, essentially juggling you and making your life drain away completely, which can be very frustrating.

With no way to level up your health, damage, or mobility (which makes collecting points worthless, except for obtaining lives, which are also worthless considering you respawn at check points), later levels can be extremely unforgiving in terms of surviving waves of enemies. Also, the health items are really random, with some areas having zero and others occasionally containing two at a time in some places. It's almost like the developers expect you to take damage going through certain areas and then are forced to heal you because you can't survive the next area without powerups. It doesn't feel like a case of "git gud" either, it feels more like the randomizer isn't working as well as it should.

Finally, on a minor note, your jump is always at 100%. There are no small jumps, you full on leap for the stars every time you tap the button.

A Hole New World is presented in an awesome 2D pixelated style reminiscent of Castlevania and Shovel Knight. Perhaps a bit darker than Shovel Knight, but still cartoony enough to not be a Castlevania clone.

The Hero is well-designed and his abilities are well-animated. The world around you is solidly constructed, but each of the zones feel a little bland unto themselves. As the levels stretch on, the only real difference in progression is the Up World and the Down World, and in some cases, it's really just a mirrored color swap in some cases. Few things tend to stand out in early stages, and it can sometimes feel like you're walking the same length of hallway over and over. Enemy design is well done, and each of them look unique and easily identifiable, albeit a bit silly at times.

Three words: sentient ice clouds...the sound design is catchy and pleasant, and the music has an 8-bit tune that one would expect from this style of game. However, on some of the longer stages, the tunes can get pretty repetitive, so it would have been nice to get more musical variation.

A Hole New World is a fun game that feels somewhat unfinished. The balancing issues keep this from being the next Shovel Knight, and given the style and feel of the game, it's obvious that is what it is trying to become. While some design choices really drag it down, overall this is a fun platformer with some interesting mechanics that will keep 2D retro enthusiasts happy. 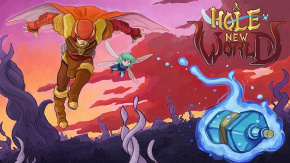