Developed by Games Farm and published by Kalypso Media, you assume the role of a shadowy demon that feeds upon souls and manifests them as physical puppets, otherwise known as a Devourer. You use various "puppets", which are human warriors you control, and make your way across various dungeons and other locations, stabbing, bashing and casting your way thorough the game world in a Diablo style manner.

A strange bearded man has summoned you for one simple task: save the world! Now, as a shadowy demon that feeds upon souls, this may seem like a job for someone else whom is less 'not alive' and more 'not a demon'. The man, however, assures you that much more sinister things are happening, culminating in the destruction of everything in the mortal and shadow realms. As a Devourer, you will travel the lands to swallow up the powerful souls of dead champions and utilize their abilities that were otherwise going to waste. Oh, and save the world, too.

To partake in physical combat, the Devourer requires living puppets; certain enemies, characters, and environmental objects can only be interacted with in the mortal world, and vice versa for the shadow realm. Your party contains a melee fighter, ranged warrior, and magical mage, as well as your non-corporeal self. Each member has their own stats, equipment, and abilities, and can be swapped at will to perform long combo chains or avoid damage. Buffs given to one member are applied to the entire party, further encouraging constant switching to maximize offensive and defensive power. Should you or all your puppets perish, the Devourer is banished and it's game over. Occasionally, there are checkpoints that slowly restore health for the Devourer and its puppets, and a consumable restoration item is filled through killing enemies.

Depending on your initial choice of puppet, interactions with other characters will be affected, as well as the content and order of certain side quests. Otherwise, the structure of events will follow one main quest. I know nothing about the Heretic Kingdome universe, though the plot and its lore that were presented through the game are very interesting and often defies certain conventions.

Though lacking in crisp fidelity in textures and particles, the design of characters and the environment are quite striking, especially when in the shadow realm. Ambient effects go a long way to picking up the slack left by some rather limited level layouts and chunky animation.

Music tracks are enjoyable without being overbearing. Sound design as a whole is satisfying and voice acting for major characters is well-done (the same can't be said for less important ones, though). The mixing for the Devourer's voice and abilities is my favorite, but his lines are so very strange and not entirely fitting.

Shadows: Awakening is a familiar experience with many fresh twists to the formula. There is a ton of variety to be found here, the characters are a blast to experiment with, and overall, this is one game I can't recommend enough for fans of action RPGs and fun games in general. 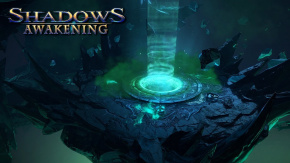