Published by Deck13 and developed by Lazurite games, To Hell With Hell is a run'n'gun type of game, reminiscent of Enter the Gungeon, where you fight your way through the forces of Hell in an effort to escape and get back home. Starting out, you can use two weapons at a time, running the usual gamut from pistols and shotguns to swords and sledgehammers, and more! Enemies can be anything from small demons who take potshots at you, to snipers, succubi and big, hulking auto-crossbow wielders, to little demon wizards who delight in covering the playing field with damaging explosions.

A War is going down between two of the major denizens of Hell for control over the whole shebang. The previous leader, Asmodius, is losing badly, but he has an ace in the hole – a bevy of half-breed humans whom he has fathered over the years. Your character, a stripper named Natasia, is one such half-breed, and you are drafted into the war in Hell. If you succeed, your reward will be freedom; if you fail, well, you'll be dead, but at least you're already in Hell.

The main gimmick to this game is the addition of equipment in the form of masks you can find in each level. Each mask gives you a hit point buffer, adding your original HP total to your current one, so you can keep one in reserve while wearing the other, allowing you to triple your health meter. Not that that will be enough – as of this version (Early Access), each mask will still be destroyed in about two good hits. The masks give you alternate looks over your bikini-clad self, such as a demon or clown face, or even full transformations like a ninja or flying orb demon. Each also has its own special powers, ranging from mind control for the clown, to a defense boost for the knight, though most are just bigger and badder booms. You can also pick up special permanent perks in between each level. These can be anything from extra ammo capacity to health regen to having a little skeleton follow you around and take potshots at enemies with his crossbow.

Note that, at least in EA, you only get six saves on the easiest difficulty – not six save SLOTS, just six SAVES – to last you throughout your entire adventure. The dev team monitors the forums well, and works hard to implement fixes to known issues. Also, as far as controls go, you can use the keyboard to move and mouse to aim/fire, or a gaming controller, and seeing as this is a twin-stick shooter, it really benefits from the use of a proper controller, despite its sensitivity to misclicks at times.

The graphics are the straightforward sprites you see in most games in this genre, with lots and lots of attention to ghoulish detail, especially in the environments. Not as well-animated as, say, Dead Cells, but I'm not sure it was meant to. The sound is decent overall, with the gunshots and melee attacks sounding suitably meaty. The little screams (from you and the enemies) sound good as well.

Overall, this is a great start, with enough fun and variety to keep me interesting and looking forward to the final product.


To Hell With Hell
Pros and Cons
Lots of potential
Controls well, though aiming might feel a bit wonky if you're not used to the genre
Interesting take on the story for such a game (i.e., it actually has one)
Lots of potential
Still a bit rough, but that's expected for Early Access
Little to no music after the title screen and opening 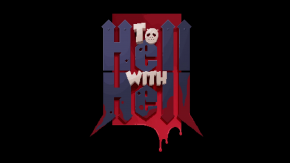