Welcome to the little RPG Tower Defense hybrid that could, Aegis Defenders. A 2D pixelated style title by GUTS Department that had a successful Kickstarter campaign in 2014, the title released on February 8, 2018, and does not disappoint its backers. Featuring smooth and responsive controls, real time crafting mechanics, Tower Defense style gameplay, and various RPG elements, the game has something for everyone. Aegis Defenders begins with a relatively short platforming segment filled with hidden collectibles and puzzles before quickly transitioning into a Tower Defense mode where the main character, Clu, and her grandfather have to defend a relic against various mutated insects.

As the game first loads, you are introduced to Bart, an old engineer, and his granddaughter, Clu. The pair are Ruinhunters, scavengers of ancient relics hoping to turn a profit from their discoveries. The world is set in a kind of semi-apocalyptic nature as the environment consists of mostly wilderness with some hints of former civilization like drainage pipes and broken down infrastructure, and mutated insects are your primary enemy. A large militaristic force seems to govern what remains of civilization and is told to be an ominous force by Bart. Throughout their journey, the duo meet other characters to join them in their search for precious ruins while brushing shoulders with ever more threatening insects and soldiers. Character interactions are visualized with a detailed image of the character in question with a speech bubble, and while the game does feature voice acting, it is kept to a minimum, mainly chuckles and exclamations. The transitions between character interactions and gameplay are extremely smooth, with quick sentences often leading immediately to large scale engagements. The bits of lore that were dropped throughout the story between characters kept me thoroughly engaged during my time with the game whenever I was out of combat.

Aegis Defenders takes the best qualities of various genres and presents them in a compact package, with well executed elements of traditional platforming, crafting, and Tower Defense. The environments of Aegis Defenders are open ended and encourage exploration, and I found myself eager to dig into the game's nooks and crannies, often finding all sorts of items and collectibles. The crafting element surprised me the most, as each character has a unique deployable that used resources in the environment. For example, Clu began with a bomb, and Bart, a deployable automated turret and each character has the opportunity to expand their arsenal through upgrades. The subtle RPG elements are seen in either increasing the stats of base items, or getting new items altogether. Even with upgrading and purchasing new equipment being a key part of the game, there are many dialogue options to choose as you progress through the story, and lore savvy players will appreciate the occasional pop culture reference and meme. Now, we could not continue the discussion without acknowledging the Tower Defense aspects of Aegis Defenders. As the pair of Ruinhunters stumble upon an artifact, they typically have to defend it against various waves of enemies before being able to retrieve it. The previously mentioned mechanics of crafting and deployables shine their brightest here, and properly utilizing each character's unique skills and items will allow you to hold off ludicrous amounts of enemies.

Following the trend of pixelated art, Aegis Defenders delivers beautiful visuals in a minimalistic manner. Colorful and diverse environments are presented before the player and I often found myself stopping just to take in the surrounding area. The soundtrack is also finely crafted, using soft melodic tunes during the platformer exploration segments, and a more dramatic orchestral ambiance whenever defending an artifact. The music and visuals were personally very enjoyable, and I would say that any fan of the pixelated art style would also be equally, if not more impressed with what the game has to offer.

Aegis Defenders is a huge success. The game is remarkably smooth and balances a multitude of mechanics to the point where the player is never overwhelmed by information at any given time. Gameplay controls are tight, responsive, and easy to learn, and the Tower Defense and RPG elements sometimes makes the game feel as if there are two unique experiences in one bundle. The art and sound are both well done, giving the player plenty of eye candy as they fight against soldiers and mutated insects. Aegis Defenders is a playful experience that caters to its diverse audience of platforming, RPG, and Tower Defense players extremely well. 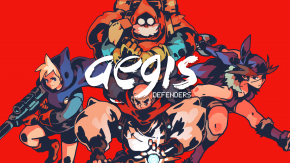