You control one of three small, pixelated warriors equipped with a sword, pistol, and an assortment of gadgets and stats. Your mission is to traverse dangerous labyrinths to locate and stop an evil witch who is using an army of robots and the power of ancient gods to destroy the world. Along the way, you’ll fight through evil bots and environmental hazards at every turn, and dispatching your foes grants you XP and unlocks talent points. In between levels, kiosks for spending talent points and buying resources become available, and you can divide your points among four fields, which will largely determine how you take and deal damage: health, ammo, strength and defense. There are also item boxes that offer better (or worse) weaponry, and trinkets that give your character extra perks. When you die, you're dead; it's back to the start with your default gear and stats, and each level gets rebuilt from the ground up.

Other than the opening cinematic that details historical events, there is little in the way of a narrative. Occasionally, you'll find a bystander to interact with who will usually spout off some lore or remind you who the bad guys are, and overall the world comes together nicely to create a neat setting.

In each level, you begin in an upper portion and try to reach the exit somewhere at the bottom. Treasure chests and other containers drop cells (the game's currency) when destroyed, and are littered throughout the world. The enemies you face move about the environment in predicable movement and attack patterns, and while the levels are randomly generated, certain structural elements do get repeated, and you quickly figure out which are worth exploring and which can be passed over. Every two levels, you'll encounter a boss enemy for a straight up duel, and winning nets you a special trinket and a small amount of teamerite, a rare currency used to unlock more items that can be found in boxes.

Combat involves melee hacking and ranged blasting. In the first area, enemies are dispatched with a few swings or shots. As the game progresses, they receive considerable buffs to their health and damage output. Not to say they get any smarter; enemies are functionally identical between levels, with some cosmetic changes and the addition of explosive properties. This increases the time it takes to kill a single enemy, but it doesn't require players to do anything more than stand in a tactically advantageous position and spam attack buttons. If you are unlucky and don’t find better gear, or if you didn’t distribute your skill points properly, you will be very unsuccessful. Health and ammunition are also received in paltry amounts; pickups occasionally drop from broken containers, but most of the time it's up to between-level shops to refill your health and ammo, and you're at the mercy of their randomized stock.

In little ways like this, the game leaves much to be desired and it's also full of strange design decisions. Things get stuck in the terrain, causing enemies to wig out or die and the items they drop become unreachable. The terrain itself is destructible, but there is nothing to find within it and explosives are limited and incredibly weak.

You can wall-jump to reach higher areas, but the way it propels you upward often prevents proper climbing. Weapons operate on a dice roll, making your damage output inconsistent. Guns need ammo to function, which seems to encourage saving resources for stronger foes; however, you are prevented from using anything other than your melee weapon during boss battles. There is more to complain about, but these are my main problems and I will abstain from needless nitpicking.

The style follows a strict pixel art aesthetic and is very minimalist. Items, characters, and the environment are presented with the fewest amount of pixels possible while still being identifiable. The biggest issue is the color palette. The color of terrain and the background are so similar that they are often indistinguishable, not to mention hard on the eyes. Hitboxes are also woefully inconsistent. Large enemies often can only be damaged at their lowest physical section and slip through gaps much smaller than they are. The overall design is pleasant, it's the mechanical functions and color choices are highly questionable.

Sounds are limited to a chip-tune theme. While not inherently bad, the tracks are not very dynamic or even unique from one another. Each area also only has one song that is continuously looped until you reach the next area. The multitude of sound effects consist of various blips and bloops that serve their purpose well enough.

Xenon Valkyrie+ provides a decent experience with many secrets and theoretically infinite replayability. However, its basic mechanics have many flaws and baffling decisions that have been been solved years before. It is more dated that it is retro. 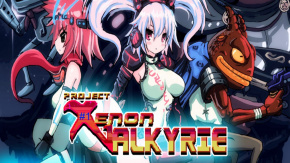