Tomb Towers, developed by Mosaique Games, takes a pixelated approach in their homage to classic dungeon crawlers of old. With nostalgic, arcade-like visuals, the game presents some new twists on classic platformer mechanics, with over 45 main levels to test your timing and puzzle solving skills, as well as 15 bonus levels containing more difficult rooms to navigate your way through, as well as additional special mechanics. At its core, Tomb Towers is a platformer that targets audiences who enjoy old school, 8-bit aesthetics.

The premise of the game is simple; your kingdom is under siege via an undead army raised by a necromancer. You, an unnamed soldier, quickly grab your trusty sword and helmet and get to chasing down the necromancer who has locked himself atop a tower. While a bit too simple for my taste, the story does provide enough grounding to explain why you are playing through a daunting number of locked rooms, each with new contraptions, enemies, and the means to overcome said obstacles. The opening cinematic of Tomb Towers is consistent with the art style and overall theme of the game, keeping a solid flow between story and gameplay.

Tomb Towers is essentially a tribute to classic platformers with a few unique twists, and plays how you would expect. However, there are several fundamental changes that drastically alters how the game is played. Firstly, your character has a jump that is controlled by how long the jump key is held. In confined spaces, your character is literally able to hug the ceiling in order to avoid enemies. Secondly, the speed of the game can be increased via a fast forward icon on the left side of the screen. The option to increase the speed of the game gives experienced players who are familiar with platformers the chance to breeze through levels. The speed boost not only increases your character's movement speed, but that of your enemies as well. As a result, utilizing the speed boost option comes with its own unique challenges. Another note of importance is that there's no way to directly attack your enemies, save environmental objects such as heavy crates and barrels. All these aspects slightly alter the typical take on familiar platformers such as Mario or Castlevania, where there are still some direct means for the player to eliminate enemies. I found these changes to be refreshing, as the game required me to think in a different way than I do when I'm playing most other games in the genre. Rather than, “how can I kill all the enemies”, I found myself thinking, “what’s the best route to take without being hit?”.

Tomb Towers is a pixelated platformer game and is by no means a graphical powerhouse, but it's not supposed to be. Its low resolution plays towards the nostalgic atmosphere of older NES and DreamCast games with the simple upbeat soundtrack contributing equally to setting the ambiance. Being a fan of the old 8-bit art style, I had some affinity towards Tomb Towers and its efforts to appear genuine to the era. The in-game sound effects are well timed and occasionally comedic, making the ambiance more enjoyable.

In consideration of Tomb Towers being Mosaique Games’ first Steam title, the developers have done an excellent job in recreating the old school, 8-bit atmosphere and aesthetic. While the limited controls hold the game back in some ways, players are given varying environments to explore and utilize the controls in a variety of ways. Unique platform contraptions and a plethora of enemies, each with their own behaviors, contribute to keeping the game feeling fresh, even after several hours of gameplay. Tomb Towers is an engaging game that will satisfy rookies and veterans alike. 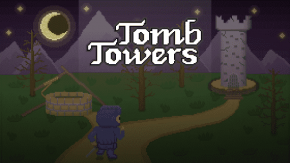