Son Of A Witch Review

Son of a Witch is a rougelike that's sort of a cross between Castle Crashers and Scribblenauts. You run around, use your basic attacks, and more or less break everything in sight. You have a melee attack with swords and axes, and eventually you can learn to use bows, magic staffs, bombs, scrolls, and more. The game also supports up to 4 players locally and online.

The story is about two brothers who live in the forest with their mom. One day, the kingdom comes calling, and hauls their mom off to the castle. In the meantime, there's a vicious little goblin camp on the other side of the castle, and it looks like they are just about to attack. Luckily, your witch mom has left some magical help to aid you on your quest, so it's time to survive the goblins, storm the castle, kick some ass and save your mom!. That's pretty much the extent of the story, and although it's bare-bones, it's serviceable enough to push the gameplay forward.

There are seven classes and multiple characters to choose from, however, some of them feel like simple reskins of one another. This might be due to the game's multiplayer and wanting to have differing members of a given party so everything doesn't look the same, but it's still noticeable. Each character does has a different load-out, however, with different starting items and bonus gear. You'll make your way through the levels, killing pretty much everything that comes your way, as well as managing your weapons and potions. You'll run into a colorful (literally) cast of characters that all need help, from stabbing a ton of baddies to playing mini games, which are usually a lot of fun. There are also various bosses and special challenges that you'll need to defeat to continue on your quest, and some of the challenges you have to unlock by beating levels, or in some cases, the entire game.

The game plays smoothly and is deeper than first glance lets on, but one criticism I've got is the design of the walls. When you move through the map, you've got your path outlined by parts of the walls, and the devs took the NES Legend of Zelda approach of dungeons, with the exits being fully visible from all angles. Which is to say, moving up or down to a new room has the same sprite, just flipped upside down. Same for the left and right doors being turned on their sides. It's a small gripe, but it was noticeable, and I wish they'd picked a better design choice. The maps are randomly generated and most are laid out quite well, and outside of a few clipping errors and being unable to attack certain enemies when they are knocked prone, there is very little wrong with this game, mechanics-wise.

On top of the main story mode, there are a myriad of other styles of play, including Hard Mode, Party Mode, Barbarian Challenges, Daily Challenges and even a PvP arena where you can brawl with other players. The multiplayer is a lot of fun, as it usually tends to be in these types of games, and I love that this is one of the few multiplayer games where I can just toss a controller to a friend and have them jump into a game; it's the type of title you can start playing mid-conversation and just continue talking while you hack and slash away. The controls are simple and easy to adjust to, and the combat mechanics are easy to pull off. Having a friend playing alongside you just generally makes the tactical fights a ton more fun.

The art designs are of the cartoon cutout variety, and it suits the game nicely. The colors are bright and the animations are stilted but fun to look at, and there are some interesting character design choices, although nothing too crazy. The music is also well crafted, fitting the fantasy RPG genre of tunes, and the SFX are well done and don't get annoying, which is a good thing to have in a game where you are attacking 90% of the time.

This game is challenging, charming, funny, and most important of all, entertaining. Solo play is great, and the multiplayer is fantastic. This is one of my go-to party games when friends are around, also this is a really solid contender for best intro to roguelikes. It has all the little goodies that you enjoy in a roguelike, and as long as you don't mind a couple ants the party isn't spoiled. 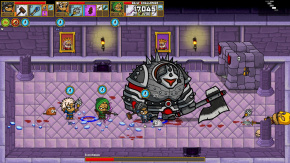