Ghost Of A Tale Review

Ghost of Tale is an intriguing take on the stealth genre, brought to life through a delightful and sometimes dark fairy tale. With a rich, deep world and incredible visuals, the game has a lot to offer those who are seeking both a challenge and an engaging story.

Let's get this comparison out of the way; yes, it's a little like Metal Gear, albeit in a fairy tale world where no one is snapping anyone's neck or shooting anyone. You play as Tilo, a mouse imprisoned in a compound called Dwindling Heights. Your job is to escape and reunite with your wife by utilizing stealth and cunning to get past your enemies. Tilo states early on that he is no murderer, so the rats that guard the place cannot be killed; instead, like a real-life mouse, you must outwit them. Toss sticks to distract them, hide in crates and barrels as they pass, or occasionally bean one with a bottle to knock them out. But remember, your supplies, especially bottles, are limited. You must plan and utilize your tools wisely.

Early on, the gameplay is entirely focused on stealth and investigation, and the game mechanics are laid out and explained naturally, with a solid learning curve that allows you to really master the ins and outs as you progress. As you continue, you can collect outfits to help you blend in, from multi-colored head-coverings to domino masks and different colored shirts and pants. You engage with progressively more fantastic characters that are a lot of fun, and if you don't believe me, just wait until you start carrying on with an insane pirate frog and you'll see what I mean.

The world is rich, beautiful, and most importantly, alive. Time moves through a day and night cycle regardless of what you're doing, and certain characters and activities will become unavailable if you're too slow. Still, there's just as much to do at night as there is during the day, which is one of the game's strong points. It takes a map that is admittedly not a very large one, and makes it feel huge. The map is broken into six sections, but with the limited mobility of a tiny mouse and labyrinthine architecture, it can feel like a hundred.

This is where the game does run into an issue, though. While the areas are beautiful and well defined, often times it's hard to know where you are specifically. The in-game maps have no detail and no labels, so if you aren't certain where a guard is supposed to be or where the commissary is, you might have difficulty in traversing the map. And traverse you will. Back-tracking is the name of the game here, unlocking a tiny bit of progression on one side of the map to allow you another tiny bit of progression on the opposite side. The game does it's best to make travel less tedious by offering shortcuts to places you've unlocked, but with the same guards barring your path in either direction, it can be a chore to run from objective to objective.

The game has a light puzzle-solving theme, but mostly it relies on collection quests. Without the proper upgrade to Tilo's senses, collecting mushrooms, urns, and bugs can get tedious quickly, though the game is kind enough to put more items than you need into the world.

The characters themselves are undoubtedly one of the most stand-out parts of this game. While there's no voice acting, the dialogue branches and character quests unlock a lot of back story and really help to make you care about the characters. They're deep, surprising, and more often than not, very funny. While not breaking the immersion of a beautiful fairy tale world, these characters are often self-aware about the game and its limitations.

If I had to nitpick, I'd have to say that the game, while ambitious, seems to lose its way at the very end. I won't spoil anything, but the final conflict seems to come out of left field and, while you can resolve most of your b-plot quests with satisfaction, the main story's resolution feels dull and lacking, as if there were another chapter that was accidentally removed.

The visuals in Ghost of a Tale are stunning. The world is alive with blowing leaves, creeping bugs, and characters that feel real. While there's no voice acting, the sound track is great, and it's a shame the minstrel song mechanic isn't utilized more. Furthermore, being a stealth game, being able to hear footsteps, clinking chains, and other signs of activity is incredibly useful.

Ghost of a Tale is a beautiful game that begs for a sequel. The world is so fully fleshed out that it feels as if there is already a large catalog of games in the same world. If you're into stealth, fairy tales, and rich characters, you can't go wrong with this game. Just don't be surprised if the end leaves you wishing for just a little more. 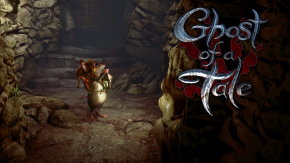