Vampyr is the latest title from Dontnod Entertainment, following Dr. Reid, a doctor turned vampire who stalks the streets of plague-ridden London circa 1918. You'll spend you time fighting Skals, which are basically a low-class type of vampire, and speaking with locals via a robust dialogue tree. Chowing down on the local populace will grant you extra XP, but the longer they live (or marinate, I suppose) the more XP you'll get when you eventually feed on them. Learning more about the locals will open up a "web" of connections, since many of the citizens know each other and will divulge information about one another, which all opens up additional sidequests and raises the XP gained from killing them. It's basically setting a steak in front of you, then adding delicious sides and daring you to wait to eat it.

You begin by waking up in a pile of bodies, gasping back to "life," disoriented and confused, instinctively moving towards the pulse of a heartbeat. After a horrific and inconvenient run-in with someone close to you, you are promptly spotted by a group of guards who have major beef with you, and you are on the run. From there, you'll meet a cabal of ancient vampire hunters, vampire femme fatales and lots and lots of doctors, nurses and patients. The more you talk to these Londoners, the more you become invested in their lives; a drunk at the bar seems like an easy meal (and a tasty XP boost) until he drops the name of another local. Great.

Putting away your fangs, you track down the man in question, where you overhear some interesting information about the drunk. Back to the tavern, you speak with the drunk, eager to feed, and see that new conversation options have opened up. Well, surely you can just spare his life for a little while, fattening the calf until he's ripe with XP. Then, since he's gotten to know you a bit, he spins out a sad tale, and you realize he isn't total scum, that he has good reason to drink his mind into blackness. Before you know it, you feel sorry for the lout. You should have just eaten him when you had the chance, you think, but since he mentioned that pretty nurse on the second floor of the hospital, you might as well head over there and see what her deal is...

This is Vampyr in a nutshell. The game does a great job of setting you up for the kill, but also "rewarding" you with more options, side quests and conversations if you temper your murderous impulses, and before you know it, you realize you aren't "fattening these people up", you are helping them, even, ugh, caring about them, and wanting to spare them. You can't eat Bob, right? He's Bob. Good ol Bob. You'll just find someone else to munch on. The moral back and forth between Reed's "human" mind and his vampiric blood lust was interesting, although the set up doesn't always jibe with how you play the game, since it's up to the player to become a bloodthirsty freak or get by eating rats instead. I kept thinking of Stephen Dorf in Blade, saying, "I'll tell you what we are! We're the top of the f^%#ing food chain!" and wishing I could adopt that mentality, but too soft to actually do it. When the game works, this is conveyed perfectly.

Other times, I couldn't care less. The conversations are melodramatic at times and downright cheesy at others, although the bulk of the writing is mostly solid. The dialogue often rings true, but boy, is it wordy. At times, I felt like I could have been watching a TV show instead of playing a game. The guy that hurt his arm won't tell you how he did it, you have to pry it out of him. Oh, he has a son? Well, now he doesn't want to talk about him, come back later. A lot of the problems the citizens talk about seem like they would have been real problems of the times, but conversations can go on and on at times, which taxed my patience, and my willingness to keep some of these people alive.

The world Dr. Reid inhabits is undeniably a character in its own right; it's haunting, beautiful, serene at one point and chaotic at others. The hospital feels lived in, and the streets are perfectly suited for both predator and prey, depending on where your power level is and what is lurking in the streets. The more you destabilize the various districts, either by glutting yourself or ignoring sick patients, the worse the area gets, so much so that you can "lose" entire districts, and become cut off from them completely. Also, the more you kill, the more the streets will run rampant with creatures of the night, giving you both problems, and chances at more experience, so the balancing act continues as you choose between human and inhuman actions.

The combat is serviceable but nothing special. Reid moves in a kind of slow motion, and changing direction at a full sprint is both realistic and odd simultaneously, as you have to take a few steps to slow down, stop, then begin running the other way. Moving with your shadowy vampiric powers feels much better, as you magically appear and disappear in a puff of black smoke to attack, and teleporting short distances is a perfectly realized vampiric power. The skill tree is solid fun, with everything from blood spears to increased energy gained from your kills. You activate your powers by using your reserves of blood, forcing you to stun and feed on enemies during combat to keep your supernatural attacks flowing. You can use a weapon in each hand, a melee and a firearm, or you can use two handed weapons like an axe or spear. Overall, the combat is nothing to write home about, and can get a little repetitive as the game goes on, but the star of the show is the dialogue and choices, with the combat almost feeling like an added bonus at times.

The graphics are great from afar and mediocre at times when you are up close, but overall they fit the tone and mood of the game well. The streets are foggy and blood drenched, and London feels like a natural setting for these atrocities. The camera was odd during dialogue, where you can control it, but overall, the weirdest thing to me was seeing good, hardworking doctors and nurses unable to notice they are staring at a chalk white, red-eyed demon.

The sound is a standout, hands down. It swells and dips, from synth sounds to orchestra, and perfectly fits the environment. The music is as responsible for the setting as the graphics, and it comes through in spades.

Vampyr sets out with an ambitious plan and mostly succeeds. Although the combat is somewhat lackluster, it's still fun, and the dialogue is robust and varied, although at times it can be melodramatic and wordy. Overall, Vampyr is well-worth the price of admission, reminding me of a bit of Mass Effect 1, where the combat was less polished than the branching dialogue options. This is the best vampire game in a long time, and if you have a taste for talk and the macabre, you won't be disappointed. 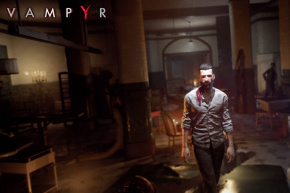