You control Otto, a spry lad being trained in the art of Shaping, an ancient art that uses Anima to create and control Guardians. He must pass the rigorous testing in order to be made an official Shaper, which will make him eligible to marry his fiancee, Ana. Unfortunately, she is unexpectedly sundered by the evil wizard Zahr as part of his plan to destroy everything. Your mission: travel the lands and recover the three pieces of Ana so she can stop Zahr from unleashing malevolent energy at the world's core, utilizing your Guardian army and Scottish accent to solve puzzles and defeat giant Golems.

Anima is your main resource and can be found all over. It is used to summon Guardians and activate things you find in the environment. Initially, you only have access to Protectors, a melee unit that acts more as a distraction for enemies to attack while you whittle away their health. As you progress, more types get unlocked, each with various attributes to help round out your forces; these include a bow-wielding ranger, Anima-gathering mage, heavy armored giant, and a Guardian that creates their own little summoned army. Summoning is simple; you select the type and press the summon button, which instantly creates a set number of that unit type. You can also recycle units to retrieve their Anima and create different units.

The majority of the game sees you traversing a level, solving light puzzles and filling objects with Anima to activate them. Thoroughly exploring an area will amass XP and other collectibles, steadily increasing your maximum health and Anima as well as unlocking various perks for Otto and his Guardians. Occasionally, you will enter a combat arena and do battle with gigantic Golems. These are generally much tougher and larger than you or any one of your Guardians. The goal is to enforce your army with appropriate units to maximize damage and minimize losses, while maintaining a steady stream of reinforcements and making sure Otto doesn't get killed. Performing well in these battles increases the XP reward after defeating all enemies.

Generally, there is not much challenge. Otto is in relatively little danger unless you go against common sense and attempt to directly engage Golems or spend a large amount of time in hazards. The most difficult part is coming to terms with the disposable nature of Guardians, and running away from the occasional wall of instant death. Masters of Anima is more about providing an enriching experience rather than deep gameplay systems.

The core of an ancient volcano is the source of all Anima in the world. In the beginning, its untamed energy caused untold chaos, but was eventually stabilized and sealed by Shapers. For generations, people used the power of Guardians to build great civilizations. Otto, a Shaper apprentice, is trained by Ana and his old mentor (the three of whom make up the entire human population). Soon after Otto completes his training, the volcano begins to spew forth chaotic Anima, signifying the ancient seal is being weakened. Zahr reveals himself as to be the cause, seeking to wipe out everything in existence in order to build it anew. Ana is the most capable Shaper to prevent such from happening, but Zahr splits her soul into three parts. It's up to Otto to find each part and reassemble her so she can stop Zahr.

The narrative is coherent with a decent cast of characters to interact with. Everyone has clear motivations as to why they do what they do. Otto is a very reluctant hero who is only interested in saving Ana. His journey is one of self-discovery, as he learns to take the situation more seriously instead of running away. One large complaint I have is how dead the world feels. Besides the people who have speaking roles, you never see evidence of civilization other than ruins.

The game has a lot of style with very clean texture work. Character animations have an appropriate amount of weight behind them and convey their actions well. Particle effects are pleasant to look at and not distracting or overbearing. Overall, the graphics are polished and unique.

Each type of Guardian and Golem have distinct 'voices' that differentiate them, effectively characterizing them in the shortest way possible. Other sound effects, like your summons attacking things or filling a gate with Anima, are mixed very well with very stoney impacts. The only elements of sound that I felt needed more work was the voice acting and dialogue. All the speaking characters have very flat delivery and repeat themselves often, to the point that it gets grating.

Masters of Anima is a light and charming adventure. It does not demand much from the player, nor does it have a lot of depth. I recommend it for a casual player or someone looking for a relatively relaxing experience.

it makes you want to play it 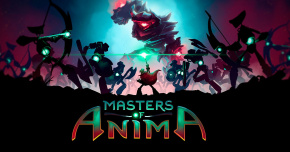