THE CHRONICLES OF NYANYA

Let me get this out of the way. This game is weird. Really weird. But luckily, it's also very self-aware, and it makes its mark almost solely on the merits of its humor. That said... The Chronicles of Nyanya is the story of a young cat named Purr who's village of sweet-roll raising farmers is destroyed by Orcats (Cats... but Orcs) and she ends up being raised at the Temple of the Red Dot by assassin cats under the name Catair (you know, like Altair). That's the least weird this gets.

I can't really go into depth on the story because it's not an in-depth story. You're seeking revenge for the childhood massacre of your family, you join group of "adventourers" (sic), and protect Meowder's Gate from an oncoming assault of Orcats and sentient furniture like stools, chairs, dressers, and the fabled and rare closet. Along the way you meet characters that reference nearly every pop culture fandom you can think of. Like Harry Potter? There's a cat for that. Final Fantasy? She looks like Aerith. Meowbledore... Nyandalf the White... Meowruto... Meowlan. The list goes on and on.

Now, this is a good time to point out that this is an RPG Maker game. That said, the team manages to stretch the limits of what that little engine can do in big ways. There are slider puzzles, stealth sections, branching dialogue paths, a pet to raise, a friendship counter, and multiple endings depending upon your choices. Despite all that, the core gameplay is still a generic, turn-based RPG.

As far as gameplay goes, it's pretty standard fare. Once you've deciphered what each spell does from the vague cat puns offered, every battle is pretty much the same. Buff your party, debuff the enemy, strike and heal, repeat. They try to mix things up occasionally, but are limited by the engine and, ultimately, the combat becomes the least impressive part of the game. For being an RPG, weapons, armor, and accessories are extraordinarily limited. I think I got three upgrades during my entire playthrough.

Let me make something clear; if you're not 100% in love with cat jokes, this might not be the game for you. The strongest element this game is its design, and that there's a cat joke for nearly every step you take. They live in cardboard boxes. A slipper from the gods comes down with the spell "Bad bat, cat!" Your mana and health potions are variations of milk. They are deathly afraid of water. The symbol of one of their gods is a toilet paper roll. They complain that they have 8 hour work weeks. Heck, Catair, your main character, studies the Way of the Red Dot (laser pointer). Frankly, it can get to be a bit much.

This is not a forgiving game either, especially in the early stages. While it goes against my natural adventurer's instinct, I was forced to spend every Nyan (in-world currency) on potions because the game was cruel. And aware of it. It acknowledged it by having important characters decide to sit out battles simply because they wanted to. But, if you can tough out the early stages, the difficulty levels out and finally allows you to start enjoying the humor that is the core of this game.

I did find some of the humor entertaining as the game progressed, despite the joke-a-minute style they chose to go with. It makes fun of other RPGs, common game tropes, and even pop culture like Batman v Superman. After playing several hours, I came to realize that much of the humor was being used to camouflage the limits of their game engine, which I will count as a positive. In the opening city, one of the countless cardboard homes that served only as decoration gave me Catair saying "I'm not going in there. What are you going to do about it? Nothing, that's what." And I suppose the game had a point.

Honestly, there's not much to say here. The artwork is humorous, but not particularly beautiful. The game boasts only RPG Maker elements for the world, occasionally customized into cat form, with stock music that really does nothing to set the game apart. It serves its function and no more.

If you're looking for a game that mocks modern gaming tropes, breaks the fourth wall, and is self-aware... well, there are better. But The Chronicles of Nyanya does have a lot of merit, especially if you enjoy the puns and cat humor, the game is a near-endless smorgasbord of dumb jokes. It encourages replay with multiple endings and even treats for the second play through. It's weird, unique, and I certainly won't be forgetting the game anytime soon. For people looking for something different, I do recommend this title. There's a lot here to enjoy, but in the end, if you want a game that's a hearty meal, this game is just kitty kibble.


Chronicles Of Nyanya Review
Pros and Cons
Very humorous and doesn't take itself seriously
Multiple endings encourage replays
The game stretches the RPG Maker engine to its limits with puzzle
The puns. They never stop. Confusing descriptions favor jokes rather than explaining what spells do
Art and music are lacking
Both story and gameplay lack any real depth.

THE CHRONICLES OF NYANYA 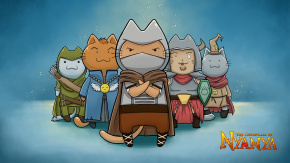