In Man of Honor, you step into the wingtips of gangster Emilio Gallo in a semi-cinematic endeavor to take revenge on those who have wronged you. Considering that the publisher, Simbryo, has developed hundreds of flash games on its website, I believe that Man of Honor can safely be considered the pinnacle of the group’s work. Playing much like Hotline Miami, Man of Honor is a top-down shooter where the odds are stacked against you, and you've only got booze, a small arsenal of weapons and gangster film one-liners to help you dismantle the criminal empire you once served.

Emilio Gallo is an ex-mafia member who's equipped with just about every stereotype you can think of, from his self centered views to his penchant for movie lines and corny dialogue. Betrayed by his best friend, the former gangster is now tearing through his old criminal empire that's grown fat in his absence. If this all sounds quite a bit like your typical mafia revenge film script, that's because it is. However, instead of being a hokey distraction, the purposefully narcissistic personality of the main character, blatantly ripped off movie lines and dry humor all come together to add a unique identity to the game as a whole.

The game also has a peculiar style to its storytelling, providing the player with interesting cutscenes in the form of a slideshow showcasing black and white noir style panels. While the panels are drawn in a semi-realistic nature, emphasizing elements such as light and shadow, the monochrome cinematics serve as a stark contrast to the simplistic, colorized style of the gameplay itself. This effect was distracting to me, making me feel like I was being drug between two different realms, disrupting the flow and consistency of both story and gameplay.

While the gameplay is responsive and easy to learn, Man of Honor is not nearly as fast paced or demanding as the aforementioned Hotline Miami, as the AI is significantly more tame, respawns almost always checkpointed, and the combo meter timer is much more lenient. While straying away from an arcade like play style, Man of Honor also provides the unique gameplay elements of “carrying cover” and “pride”. Carrying your cover allows you to pick up any corpse to use as a human shield, and pride serves as the character’s health. Maintaining a high combo charges up a taunt meter, which, when activated, initiates a bullet time that lasts longer when there are more enemies present.

The graphics of Man of Honor are relatively low-end, as is the price, allowing greater accessibility for gamers on a budget. Unfortunately, this also means that the game lacks a dedicated art style, and in-game it makes the levels seem bland overall. The color palette of Man of Honor is generally dark and gloomy, with desaturated colors and plenty of grays. While this may go well with its story of revenge and betrayal, each level feels similar to one another, with most centering around new objects to steal, or different elements shifted around that you've already seen in previous levels. However, with the shortcomings in visual presentation, Man of Honor pleasantly surprises with its choice of music. In the opening menu, you are treated to a smooth jazz melody, only to be followed by upbeat swing style rhythms in each level. The selection of jazz and swing greatly complement the formal gangster theme that brings to mind films like Godfather and Scarface.

Man of Honor is an interesting take on the classic revenge mafia story, drawing from the first Grand Theft Auto and Hotline Miami as inspirations for its top-down shooter gameplay. While the gameplay may eventually feel a bit repetitive after several hours, where the objective is to either kill someone, blow something up, or steal three bricks of an unspecified illegal substance, it's still fun to play throughout. Even with some drawbacks, the unique gameplay and audio elements make Man of Honor significantly more engaging than other titles in its field and genre, and the game is genuinely fun to play for shooter fans of all kinds. 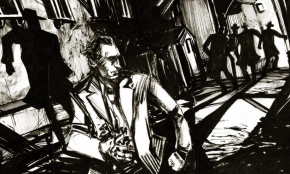