Monster Prom is a new type of dating sim from the folks over at Beautiful Glitch. You are a monster who would like to take another monster to the prom, be it a male werewolf or a female harpy, and your choices and actions will determine how successful you are. But is this a prom that you'll want to attend?

The game starts out with you reminiscing about the monster prom that you had attended some time ago. During the three or six weeks leading up to the prom, you had interacted with other monsters, done some wild stuff and tried to help other monsters along the way with some of their problems. As you progress, will you find your true love? Or will you just wind up going to the prom with a random stranger? The choice is completely up to you!

As the game starts, you have your choice on how many people are playing (you can choose to play this game solo or with up to four players), and the gameplay is similar to the single player experience, albeit with a challenge mode added in, which poses a question to the group in a party game style, and the answer will determine who goes when in the next round. Once you select how many people are playing, you choose your character: there's Oz / Yellow (some type of male shadow monster), Amira / Red (a female fire elemental), Brian / Green (a male zombie) or Vicky / Blue (a female Frankenstein). As you make your selection, you can give your monster a name and a pronoun (he, she or they). You then take a quiz that will determine what you are looking for in a monstrous prom date, and you set off to find the monster of your dreams.

The game starts with a set length of time (3 or 6 weeks) and you have three phases per day (morning, afternoon and evening) to choose where you want to go. Going to each location triggers a random event and will raise or lower some of your stats. For example, I went to the library and started a phony kickstarter, gaining some money (which can be used to buy items in the game that, in turn, can trigger certain events). After the event, you are usually met by two of your potential dates, and you're given a choice to solve a problem they are having. If you aren't careful and choose wisely, your choices can negatively impact your stats, making it harder to get together with that certain someone you've been eyeing. The choices for the problems are generally outlandish, and there is all kinds of humor on display, from llamas attacking everyone to monsters selling blow in the middle of campus. Some of it seems like it's just setting up filthy language, but many jokes land, with some solid puns and double entendres rounding out the "vulgar to be vulgar" stuff.

All of the art in the game is done by the very talented Arthur Tien and it is pretty awesome, with the scenes playing out like a visual novel. The voices are also very well done, but the sound is just so-so, pretty much just a looping soundtrack that isn't very interesting. It does its job, but not much else.

Monster Prom is an unique dating sim that defies the social standards of boy meets girl and asks her out on a date. If you like monsters, laughing and dating sims, or just feel like hosting a rave that very well may open a portal to hell, you should check out Monster Prom. 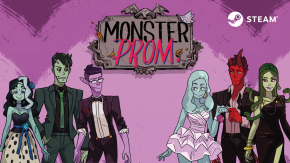