Shotgun Legend is a straightforward, top-down adventure game set in a bizarre world filled with monsters, dungeons, cool power ups, plus all the guns and ammo you'll need to explore them. You make your way through the myriad dungeons and lands, killing monsters and yeah, before you ask, it's basically a Zelda knockoff with shotguns. If that sounds cool to you (and be honest, you know it does), then you're probably going to enjoy yourself here.

You play as a backwoods hick named Eugene who gets drawn into another dimension on account of some cranky and rather nosy aliens. Now, you must track down the eight pieces of his missing hubcap in order to get back home and get back on the road. How do you do that? Simple. You know how to use a shotgun? No? Well, you pull the trigger, and buckshot comes out. Point the open end at the monsters. Done. In the meantime, you'll upgrade your shotgun in a variety of ways, from greater pellet spread to more powerful offensive output, pick up life capacity upgrades, discover new toys left behind by the aliens who brought you to the strange lands, and many new ways to make things go BOOM along the way. Much like Zelda, story takes a hard backseat, focusing on the combat instead, which works fine with the game's aesthetic.

You can move anywhere you wish in the world, so you'll definitely enter new areas and promptly get your ass handed to you out of nowhere. This is the game telling you that you aren't ready to proceed in that direction, and while I like that there is little hand holding, it can be frustrating when you don't know where to go and you keep getting your ass kicked, as I did at a few different points of the game. I understand the "figure it out" mentality, but I still wish there had been an occasional hint or signpost to give me a bit of direction at times.

There's some good detail in Shotgun Legend, from the well-recreated look of the games of yore (given the available graphics) to the small details on the monsters, like little veins in the flying eyeballs to the way the crabs scuttle across the screen. The game's enemy bestiary ends up being pretty cool and really in-depth, as listings unlock over time with enemy kills, and the database expands to even include indestructible obstacles such as floor spikes and fireball throwers.

There is native controller support, which is easy and straightforward to use.  The shotgun has a rather short range, even for scattershot, so having a responsive control option is going to help when the fighting gets up close and fierce.

Simple and super retro. Breakable walls (that's what TNT is for!) are visible without being obtrusive. Some transparency, used mostly for overhead clouds and for the bestiary “cards” that enemies will drop from time to time. This is a throwback looking game, and it looks great, because it's supposed to look old. The sound could have used a bit of work on the whole, but it's not bad, not amazing. It does the job, but it's no Zelda music. As far as system requirements go, if you can read this review, your computer can handle this game.

Overall, Shotgun Legend is exactly what you'd expect. It's a competent Zelda clone, with almost identical mechanics and the freedom to explore the world at your whim, with no pesky restricive elements like deep bits of plot to hold you back. The combat is fun, and if you are looking for a retro fix, Shotgun Legend is a good way to get it.

Shotgun Legend Review
Story:
70%
Gameplay:
85%
Graphics:
75%
Sound:
70%
Fun factor:
80%
Atmosphere:
75%
Pros and Cons
Zelda with shotguns
Shops frequently restock with new items
Good enemy variety and an AI that doesn't just rush you
Detailed enemy bestiary
Frustrating at times due to lack of instruction
Sometimes lost with no real clues on where to explore next
No lasers shoot out of your shotgun at full health
Occasional clipping issues. 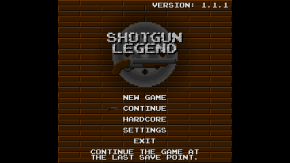