The Binding Of You

Face your inner demons and escape your own world of personal torment in The Binding of YOU, a twin-stick roguelike shooter that pays homage to the Binding of Isaac. Collect powerups, dodge your foes' attacks and try to repair your cold, dead heart.

The Binding of YOU tells the story of a kid (YOU) who was born into a loving family, but still managed to be super angry all the time. Dark energy began to pour from your body, and your heart grew cold. Now, you must face your inner demons and get your heart back in good working order.

You make your way through myriad static levels, dodging and shooting everything that comes at you. All of the power ups are random and have a random rarity applied to them, and when you pick up a new power-up, it overwrites the previous one. Power-ups are fairly plentiful, but they don't stack.

You can tell that the one man team put a lot of love into this product, and the game works as an homage, but it isn't without its problems. There's a leveling system that doesn't seem to do anything but increase a score, which I found a little puzzling, and oddly, although there is gold to collect in game, I have yet to find a store or a shop to buy things in, making the currency somewhat redundant. There are some clipping errors with some of the fore and background images, and occasionally some enemies are completely obscured by the door sprites. A couple varieties of enemies are so small you can barely see them, and it doesn't help that they are the same color as the background.

Tonally there are a few strange things as well. Sometimes beating a "zone" will require you to beat a boss, while other times you just have to get to the other end. I would have liked to see a bit more level variation, and for a rogue-like there isn't much randomness about the game, outside of what weapon pickups you get. You also LOSE any items you get at the end of each zone, which means if you get a good random attack, you won't be able to use it past the zone you got it in. There are 8 different characters, but the here differences are largely cosmetic, without any passive abilities or weapons.

The gameplay can be a lot of fun if this is your type of game; there is a decent amount of enemy variety and the shooting is fast and furious. Weapon power-ups will save your bacon in the nick of time, and although the controls are a bit floaty, steering your character gets easier once you get the feel for it.  The difficulty can get quite high, and I found most of the game to be a solid challenge, which is fitting for a twin-stick roguelike.

This game has a very unique look. It appears to be a combination of flash, vector, pixel, and RPG Maker assets, along with what looks like reworks of sprites from other games (not sure if they are or aren't that's just how it appeared to me).

The music is pleasant, and you can tell the game maker was on a budget, with tunes that sound like they are from a NonCopyrightSounds youtube channel, but it works with the gameplay, so I have to give it to him for creativity that works. The characters are well designed and aesthetically pleasing with some that are what people would call "cute".

The Binding of YOU is a solid effort from a single man team. I can tell a lot of love went into this game, but with the one man team comes a lack of polish. A bit more content and some gameplay tweaks would go a long way, but at the $2 price point, it has enough merits to be a pleasant way to blast your way through some roguelike levels. 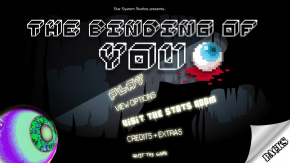