Sunless Skies is an independent roleplaying game from the folks over at Failbetter Studios, where you take control of a pilot trying to make a name for himself in the depths of space. The game is currently in Early Access, so this review is for the unfinished game.

The game is set in the year 1905, and mankind has made it into the depths of space on the wings of steam driven rockets. You assume the role of a captain of one of these steam-punk style vessels on a mission for cash, aiming to amass enough wealth so you can comfortably retire. So, basically you're just a regular guy with a 9-5 job, only that job involves exploration, cosmic mysteries, occasional horror, and dangerous interstellar space travel. And dangerous it is; deep in the depths of space, exploration gets hectic, and there are many things that will hinder your progress or just flat out destroy you. The void of space is an unforgiving place, and you've got to keep your head on a swivel to avoid a quick death. As you make your way through space, you'll pick up missions, earning the coin you'll need to spend on essentials and ship upgrades.

As you explore, you'll have to constantly be on the lookout for two important resources to keep you afloat and moving: fuel and supplies. If you run out of fuel, you'll be adrift in space and with no way to get back to safety, and you'll be at the mercy of whatever hostile denizens of space are in your area, which often results in a game over. Supplies are crucial as well, because without them, you can't keep your crew fed; without supplies, your crew will starve and die, and without a crew to run the ship, you might as well have no fuel, because you'll be stranded. There are many ways to die in space, as enemies can be plentiful and will attack you without warning, but most often it is the lack of supplies or fuel that are the true threat.

When your enemies do attack (and they will), your ship only has a few hit points and when that reaches zero, you will become just another wreck floating through space. However, when you die, the game isn't necessarily over, as your next captain in line will inherit some of the knowledge or money that your previous captain accumulated. Also, there is no save function in this game. The only way to save is to visit a port and quit, but when you load the game again, you’ll be back in the same port where you left off.

The graphics are pretty amazing, especially for a two dimensional game, and the art style of the myriad ships, cities and creatures you'll encounter in the depths of space look great. From giant floating cities that have a strong Victorian style to unknown statues that were erected by something that came out of the primordial soup before humans roamed the earth, visually, this game can be both arresting and interesting. Also, while it is a 2D game, it feels like there is some depth to it, as you'll often see a background "underneath" your ship, often showing something serene or mind-bendingly strange. The soundtrack is also very well done, and it seems to shift with what you are doing in the game and it never seemed like "background" music to me. It truly fits the tone and sense of exploration.

If you are looking for a challenging, space-centric RPG then you're going to be very happy with Sunless Skies. With a great setting, amazing controls and a great look, this game is going to be something really special. 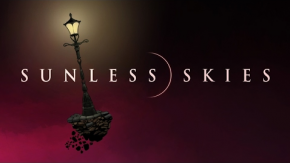